General Musharraf’s farcical exercise of bringing in “grass roots democracy,” has left the country even more fragmented, with politics sharply divided on ethnic and caste lines. The latest local government elections have not only been one of the most violent, leaving more than 60 people dead, but also one of the most controversial, marked by widespread allegations of rigging and manipulation. Even cabinet ministers and members of the ruling coalition cried foul as the administration delivered “a positive result.” Meanwhile, Musharraf proudly described the outcome as “a defeat for the extremists” and “a victory for the moderates”. In reality, they sounded the death-knell for democracy and a triumph for the forces of regression.

From the outset, the entire election process was flawed. It was with a purpose that the President appointed an acting election commissioner. With no tenure or constitutional protection, he was much more amenable to pressure. Not that the Election Commission was independent or non-partisan in the past, but whatever sanctity it had, was shattered in the latest elections.

Government functionaries and the police were openly used to intimidate rival candidates, while there were widespread reports of stuffing of ballot boxes by police in full view of returning officers. Some presiding officers were actually caught stamping ballot papers.

The elections were supposed to be non-party based. But the biggest violator of the rule was the uniformed President himself who openly campaigned for his supporters. Addressing a public rally in Swat, Musharraf asked people to vote for the PML (Q), making a mockery of the election rules. Obviously the Election Commission could not take notice of this most public violation. The very concept of “grass roots democracy,” that envisages free public participation in local government, was buried long before it could take off. 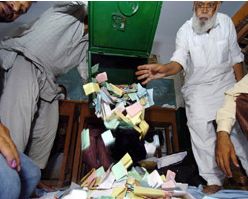 Chief ministers and ministers went around announcing development projects and campaigning for their candidates, despite the Election Commission ban. There were several instances where gunmen belonging to the ruling parties freely moved around the polling booths, harassing and intimidating voters. It came as no surprise that many councillors loyal to the Sindh Chief Minister, Arbab Rahim, were elected unopposed from his area, while candidates belonging to the opposition parties were defeated in their political strongholds. According to one independent election observer, the wily Sindh Chief Minister broke all previous rigging records and urban Sindh was virtually handed over to the MQM. However, the PPP’s dismal performance in Sindh was also a reflection of the growing internal conflict in the party’s cadre.

In Punjab it was the day of the Chaudhries. Chief Minister Pervaiz Elahi ensured that his supporters made a clean sweep in the province. In many constituencies, the Chaudhries had their own candidates pitted against the supporters of other cabinet ministers. Federal ministers Jehangir Tareen, Owais Leghari and Dr. Sher Afghan joined the opposition in accusing their own party leaders of rigging. By far, the worst rigging took place in the Chaudhries hometown, Gujarat, where rival candidates were arrested and armed thugs freely roamed around the polling sites. In many areas rival candidates were kidnapped and false police cases were registered against them.

Though the outcome of a manipulated election has allowed Chaudhry Shujaat Hussain and his cousin to strengthen their political hold over Punjab, it has left the PML(Q) and its coalition partners more fragmented. The coalition is more divided than ever and is danger of disintegrating with the slightest breeze of political change.

It is quite apparent that the so-called non-party based elections were part of a move to depoliticise society. General Zia-ul-Haq had also indulged in similar attempts with disastrous long-term effects. The latest elections have further divided society on ethnic, caste and sectarian lines. Candidates sought votes not, on any programme, but on the basis of baradari and ethnicity. A crucial reason for holding non-party based polls was to allow the ruling party greater space for manipulation. 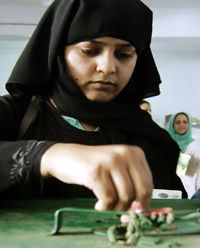 In this brand of politics it is not difficult to buy over loyalties of successful candidates and it is clear that the objective of the entire exercise was meant to make the elections a one-party affair. The local government elections are seen as an initial step for Musharraf to obtain a mandate to stay in power beyond 2007. He has already indicated that he will seek re-election after the expiry of his current five-year term.

Pre-election manipulations and poll rigging aside, the poll results provide some interesting indicators about current political trends. Pervaiz Elahi claimed that his party supporters have won 70 per cent of the seats in Punjab, but in many constituencies, government-backed candidates were defeated despite blatant manipulation. In Rawalpindi and Lahore, for instance, the PPP and Muslim League (N) supported candidates did much better. In some constituencies, results were actually altered. A case in point is Rawalpindi where PML (Q) supporters initially won only nine union councils, but later that figure was changed to 20.

The outcome in the North West Frontier Province has also been quite interesting. Less than three years after they had achieved spectacular success in the parliamentary elections, riding high on intense anti-American sentiments, the Islamic parties appear to be losing popular support in the province. In many constituencies the Jamaat-i-Islami and Jamiat-e-Ulema Islam were pitted against each other, revealing a sharpening divide within the MMA. The Jamaat received a heavy battering in its traditional strongholds in Dir and Malakand, where its candidates lost to the PPP and PML.

Another significant development is the reemergence of the ANP as a major player in NWFP politics. The Pashtun nationalist party had receded into the background after its humiliating defeat in the 2002 general elections. Like other political parties, it was also swept away by the MMA wave. The party has regained some lost ground, but still has a long way to go before it can hope to return to power.

Voters seem to have turned their backs on the religious parties in the latest polls, as votes for Islamist candidates in the Frontier declined to 23 per cent from their 46 per cent showing in the 2002 parliamentary elections. Islamic party candidates also suffered reversals in Balochistan, losing in many constituencies to secular ethnic Pashtun nationalist groups. 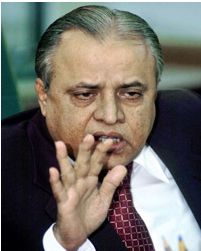 According to political analysts, there were many contributing factors. “The decline of the MMA had started much before the local government elections,” says Samina Ahmed, regional director of the Brussels-based, International Crisis Group. “They failed to deliver the goods to their electorates.”

The outcome of Pakistan’s local elections might not lead to the ouster of the Islamic government in the NWFP, but could deal a damaging blow to their efforts to enforce rigid Sharia laws in the province. Analysts maintain the elections have diluted the provincial government’s role. Last month, the North West Frontier’s provincial government passed the Hasba, or accountability, bill to establish an Islamic watchdog agency to monitor observance of Islamic religious practices and values in the public arena. The measure was darkly reminiscent of the infamous Department of Vice and Virtue, set up by the Taliban regime in Afghanistan. The move intensified the confrontation between the Islamists and Musharraf. The Hasba bill has yet to be enforced because Pakistan’s Supreme Court declared that it violates the country’s constitution. But the Islamic parties have vowed to go ahead with its implementation after making some amendments.

The Islamisation move has intensified the conflict between the centre and the NWFP government. The situation worsened after the MMA government refused to implement the federal government’s move against radical madrassahs. A further cause for concern is that the hundreds of madrassahs along the border have become the main recruiting centres for the Taliban’s fight against the American and Afghan forces inside Afghanistan. Lt. General Safdar Hussain, corps commander Peshawar, earlier this month accused the Islamic parties of supporting the Taliban. The allegation was rebutted by Maulana Fazlur Rehman who accused the military of “misleading the west and providing aid to the Taliban.” “We will have to openly tell the world whether we want to support jihadis or crackdown on them. We cannot be hypocritical any more,” Rehman declared. The diatribe has placed Musharraf in a very embarrassing position. According to highly placed sources, Musharraf wanted to dismiss the NWFP government, but was advised against the decision by PML ( Q) leaders.

Political analysts, however, are sceptical that Musharraf will go all out against the Islamists despite the conflict. “Musharraf still needs Islamic parties to neutralise the secular parties, which he feels present an even greater threat to his rule,” says Samina Ahmed. There is no chance of the alliance completely disintegrating at this stage, but many political observers believe the local elections could well mark the beginning of the end. It is, however, too early to write off the Islamic parties, as some of the factors which led to the MMA’s spectacular victory in the 2002 elections, continue to exist. Anti-American sentiments are still high and there is no other political party which can capitalise on this.

Musharraf could have served his cause of “enlightened moderation” better, had he strengthened the democratic process by holding elections on a party-basis under an independent and non-partisan election commission.

Though Musharraf has declared the election results a victory for the moderates, it is clear that victory was engineered for the General’s hench-men, who are politically and socially, the most retrogressive elements of society.

By blocking democracy, Musharraf has strengthened the forces of extremism and opportunism.