As in other parts of the country, the FBI is also operating in Quetta, the stronghold of pro-Taliban religious groups. Surprisingly enough, the reaction of the religious groups to the FBI’s presence has been extremely low key, both in and out of the assembly. Compared to their vitriolic campaign against the US bombings in Afghanistan, the FBI’s presence within Pakistan has evoked a lukewarm response from the MMA. Their anti-American election rallying cry has died down to a whimper of non-issues.

The FBI, meanwhile, have confined their operations to Quetta, and appear hesitant to venture into the interior of Balochistan despite the fact that the interior is considered a safe haven for Taliban leaders and Arab fighters.

After nabbing over 100 Al-Qaeda and Taliban leaders along the Pak-Afghan border, the US government provided the Frontier Corps with massive supplies of equipment and vehicles, for air and ground mobility, as a reward for their vigilance. US ambassador, Nancy Powell, in a special ceremony under tight security in Quetta, handed over equipment including five choppers, three aircrafts, and over 450 vehicles which include land cruisers, ambulances, trucks and tractors, as well as hundreds of wireless sets.

Last summer, the FBI, with the help of local police, picked up two Taliban leaders, Abdul Baqi and Abdur Rahman Zahid. Though the identity of these arrestees initially remained controversial, as the families and the victims claimed that they were not the Taliban leaders, but shared the same common Afghan names, the FBI remained unconvinced, and flew them out to Guantanamo Bay.

The FBI also picked up some Pakistani citizens as well as foreign nationals suspected of Al-Qaeda links, with the help of local intelligence and police commandos from Quetta. Strangely enough, again there was no reaction from any of the religious parties.

In a midnight operation in October, the FBI along with police commandos and armed intelligence agencies personnel, stormed the targetted houses, taking the occupants by surprise. They remained there for a couple of hours, interrogating family members in separate rooms, and carried out extensive searches taking away every scrap of paper with Arabic writing, before whisking away the suspects, who have been kept in custody for months without meeting any legal requirements.

“They took the central processing unit of my father’s personal computer and every piece of paper, even a few discarded two-rupee notes on which my six-year-old brother had written in Arabic,” says Mustafa Nafay, the son of one of the suspects. Recalling that fateful night, Mustafa says the nightmare began while the family was asleep and were woken by loud pounding at the main gate. When his father opened the door, dozens of police commandos “pounced upon us like an enemy army.” His father, an Iraqi doctor, Shaukat Nafay, who has been running a Saudi-funded hospital for women and children as its medical superintendent for the last 10 years, was picked up on suspicion of treating Al-Qaeda and Taliban leaders. 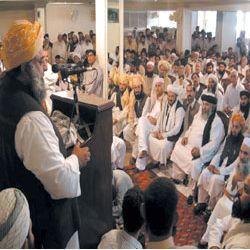 “Someone belonging to the Lashkar-e-Tayyaba brought the Sudanese couple to my brother Mohib and requested him to treat them so we allowed them to stay with us,” said Mohib’s sister. Dr. Shaukat Nafay spent most of his time in the hospital, next door to his residence and is a devout Muslim. Fellow worshippers in the mosque where he prayed five times a day, as well as his neighbours, took out a procession for his release, but in vain. “I have known him personally for more than a decade , he has never been involved in such activities,” said Anees Ur Rahman, the administrator of the hospital. After waiting for a couple of months for their release, the wives of the Iraqi doctor and the two Baloch moved the Balochistan High Court, filing constitutional petitions seeking their release. The court took serious notice of the abduction of citizens without any legal procedures. “Citizens taken into custody without any law is like abduction, and agencies involved in such practices are bringing a bad name to the government,” remarked the Chief Justice of the Balochistan High Court, Raja Fayyaz Ahmad. The police refused, under oath, before the court, to own up to the custody of the suspects, while the intelligence agencies did not respond to the court notices. Finally, the petitioners withdrew their petitions, obviously under pressure from the intelligence agency involved in the abduction.

According to inside sources, the families of the victims were intimidated with threats of dire consequences unless they withdrew their petitions. “We were given false promises that my father will join us within a couple of days, but five months have passed already,” said Mustafa Nafay.

The three non-Arabs, Fazalullah Baloch, his son-in-law, Khalid Baloch, and Qari Mohib ur Rahman, were brought in a jeep by intelligence personnel a night before Eid-ul-Azha and dropped on their doorsteps with a clear warning not to disclose details of their ordeal to anyone. “I do not know about Talha, but we were all kept in Quetta, in solitary confinement and I was interrogated about the Taliban and the Al-Qaeda, and beyond that I am unable to respond to any of your questions,” Qari Mohib told the reporters after his release. Haji Fazalullah refused to talk at all about his arrest, captivity and release. “For God’s sake do not create any more problems for me and my family. Believe me, I have not disclosed anything, even to my wife. We were warned that we would kept under strict watch,” he told a group of journalists.

Talha, the Sudanese national, was taken away by the FBI, while his wife, who is suffering from kidney problems, was left in Quetta. His whereabouts are currently unknown.

Later, a 35-year-old Egyptian, Abdur Rahman, who was staying with a Pakistani family in Quetta, was arrested by local police on the night of Eid-ul-Azha. It was the first case in which local police acknowledged their role in the arrest. “No FBI personnel was involved in the raid to arrest the Egyptian, Abdur Rahman, who was taken into custody on charges of staying illegally in Pakistan. We were helped by local people, with the help of intelligence agencies,” said a police spokesman in a statement, denying press reports that FBI agents were also involved in the operation.

Meanwhile, the province’s legal community, besides passing resolutions and condemning FBI activities, also staged rallies condemning extra-judicial arrests in the whole country. However, on the other hand, the Muttahida Majlis Amal (MMA) did not raise the issue in the assembly or within their party meetings, concentrating instead on pressurising the government to ban playing music in private buses, kite flying and fire crackers. After September 11, the MMA arranged massive rallies in favour of the pro-Taliban government and against the US bombings on Afghanistan in Quetta, and claimed to have sent thousands of volunteers to fight in Afghanistan. In reality, however, not a single MMA member was reported to have crossed into Afghanistan after the US bombings, while the party has maintained a strategic silence after coming to power, in sharp contrast to the fire and brimstone they were spewing out in the past.

Now the MMA’s sudden policy shift over this crucial issue, which brought them into the assemblies in the October elections, is obviously due to political expediency and the perks and privileges of being part of the government.