In an all-out manhunt for Osama bin Laden and his deputy, Ayman al-Zawahiri, hundreds of American and Pakistani special forces, backed by helicopters and reconnaissance planes, combed the vast span of the desert and hilly tract on both sides of the border near Rabat, the extreme edge of southeastern Afghanistan and Balochistan. The treasure trove of information squeezed out by American and Pakistani investigators from Khalid Shaikh Mohammed, the suspected mastermind behind the September 11 terrorist attacks and Mohammed Abdur Rehman, the son of the blind Egyptian cleric convicted in New York in 1995, has provided the most authentic clue yet, about bin Laden’s probable whereabouts. The Americans had finally nabbed the men who were in direct contact with bin Laden. The electronic messages intercepted by intelligence agencies had helped them to close in on the world’s most wanted man.

Unconfirmed reports of the capture of bin Laden’s two sons, identified as Saad and Hamza, has also given credence to American optimism. Saad, believed to be 23 years old and bin Laden’s eldest son, is also on America’s most-wanted list and was alleged to be a rising star in the terrorist firmament. “We are very close to getting bin Laden,” said a senior intelligence official.

Khalid’s capture from Rawalpindi has been the biggest coup in the US war on terrorism. Ranking number three in the Al-Qaeda leadership, he was also the head of the military operation wing of the terrorist network. The pre-dawn raid on a Westridge house belonging to a local leader of the Jamaat-I-Islami’s womens wing, also produced another prize catch: Mustafa Ahmed Hawsawi, a Saudi Arabian national who is accused of bankrolling the September 11 attack. Hawsawi, who initially identified himself as a Somali, allegedly funded the hijackers through bank accounts in the United Arab Emirates. He is also believed to be Zawahiri’s financier, as well as being indicted in the United States in two cases of terrorism.

Khalid, holding joint Pakistani and Kuwaiti nationality, was apparently tracked down by the intelligence agencies four weeks before his capture. Pakistani security forces had earlier held his two young sons, who are now being used by the CIA as a lever to loosen their father’s tongue about bin Laden’s whereabouts.

Yousuf al Khalid, nine, and Abed al Khalid were detained in September last year after a raid on an apartment in Karachi’s elite Defence Housing Society which was used by Khalid Shaikh as a hideout. The Al-Qaeda operational chief narrowly escaped arrest. During the raid, the security forces captured Ramzi bin Al-Shibh, a co-planner of the September 11 terrorist attacks and seven other Al-Qaeda fugitives. They boys were found hiding in a third floor, two-bedroom apartment.

Pakistani authorities believed that the arrest of his young sons would force Khalid Shaikh Mohammed to surrender. But it didn’t happen. The boys were reportedly flown to the United States after their father’s arrest last week. Khalid is being held for questioning by American investigators at Bagram airbase in Afghanistan.

According to ISI officials, Khalid has divulged that he met with bin Laden last December but maintained that he could not identify the location as he was blindfolded before being taken for the meeting. 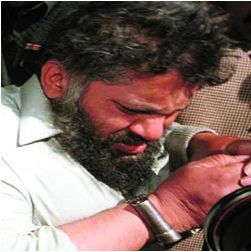 Among the items found in the Westridge house was a photograph of a smiling Khalid with his arms around his two sons. Khalid was born in Kuwait but his family came from Balochistan. He used several aliases to hide his real identity and was involved in terrorist action in various parts of the world.

Pakistani security forces and the FBI have recovered crucial information about the Al-Qaeda network trying to regroup in the region, and the possible presence of bin Laden in the southwestern region of Pakistan bordering Afghanistan. During the past few weeks, when ISI agents arrested several Al-Qaeda members and messengers, they seized several handwritten messages that appear to be from Osama bin Laden. The letters clearly indicated that bin Laden is alive and still actively guiding the organisation. Evidence found in Khalid’s possession, including handwritten notes from bin Laden, suggested that the two men were in regular contact.

At the same time, both Pakistan and the US have also picked up electronic messages, cell and satellite phone calls and emails, that seemed to be from, or directed to, bin Laden. Pakistani and American special forces have launched a massive manhunt on both sides of the porous border near Rabat, which is a well-travelled drug smuggling route. Reports from the area said that helicopters were buzzing over the area dropping leaflets, reminding locals of the 25 million-dollar reward on bin Laden’s head. American troops were also said to have stepped up patrols on the Afghan-Pakistan border. Pakistani authorities said they are more hopeful than ever of catching the world’s most wanted terrorist.

The possibility of capturing bin Laden, however, presents a serious dilemma for President Musharraf. While it will further boost support for him in Washington, it will also cause a serious backlash from powerful Islamists who may well use the issue to whip up anti-Musharraf and anti-American sentiments in the country.

This is one of the reasons behind Musharraf’s and other senior government officials insistence that bin Laden was not in the country, and their attempts to keep Pakistan’s participation in the manhunt as low-key as possible.

Khalid’s arrest from the house of a Jamaat-i-Islami woman activist underscored the support network that Al-Qaeda has among mainstream Pakistani Islamic parties. It is the third incident in which Jamaat members were found to have sheltered Al-Qaeda activists. Last January in Karachi, two Al-Qaeda operatives were arrested after a shoot-out in the house of Sabiha Shahid, another leader of the Jamaat’s women’s wing. Dr. Khawaja Javed and his brother, who are facing trial on charges of harbouring senior Al-Qaeda operatives and their families, in their sprawling residential compound outside Lahore, are closely related to a senior Jamaat leader. 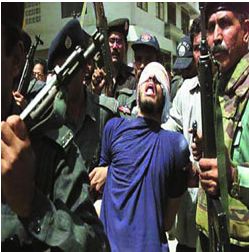 The arrests of two top Al-Qaeda leaders from Westridge has brought the Jamaat-i-Islami under close scrutiny for its alleged links with the Al-Qaeda. Prime Minister Zafarullah Jamali said the people who had provided sanctuary to the terrorists should explain their position to the nation. “We cannot compromise on the law,” warned Mr. Jamali.

Meanwhile, Jamaat leaders deny that their party has any links with the Al-Qaeda and has accused the government of political victimisation. Qazi Hussain Ahmed condemned the arrest of Khalid and claimed that he was not recovered from the house of Dr. Abdul Quddus, a microbiologist who had worked with WHO for many years. “Our party does not believe in terrorism,” said Khurshid Ahmed, deputy chief of the group. “The Jamaat leader said his party has never had any association with the Arabs, who he said came to Pakistan with the support of the CIA and the ISI in the 1980s during the Afghan mujahideen war against the Soviet Union.

Pakistani security officials reject the Jamaat’s claim, saying that party members have close links with the Al-Qaeda. According to a senior official, Khalid was holed up in the Westridge house for more than two weeks and the Quddus family knew who he was. Similarly, in Karachi, Jamaat activists were involved in the shoot-out which helped a third Arab to escape. “We have strong evidence of the Jamaat’s involvement with Al-Qaeda,” said a senior government official.

The Jamaat boasts the most active women’s wing of any political party. They have been in the forefront of the protests against the arrest of Al-Qaeda leaders. Many political leaders accuse the Jamaat of using its women members as human shields. Security officials maintain that Jamaat activists, who actively participated in the Afghan war against Soviet occupation, developed close contacts with the Arab fighters and the links continued after the war was over. “Their association with the Al-Qaeda is not surprising,” said a senior official. Faisal Saleh Hayat, the federal interior minister, said it was a matter of great concern to the government that top Al-Qaeda operatives were found to be harboured by the Jamaat. “How can they claim that Al-Qaeda fugitives are their guests?” he asked. In a press briefing on March 10, an ISI official maintained that individuals from the Jamaat were associated with the Al-Qaeda.

While senior Jamaat leaders disassociate themselves from the Al-Qaeda, others defend the Arab fighters describing them as “Islamic heroes,” and accuse President Musharraf of a shameful sell-out to the Americans by handing over Al-Qaeda members to them. “Those who fought in the jihad in Afghanistan and refused to be dictated to by the Americans are heroes of Islam,” said Ameerul Azeem, a Jamaat spokesman. “These men are the targets of America, but Pakistanis consider them as their guests and are ready to give them refuge.”

The most organised and influential Islamic party, the Jamaat-i-Islami is a crucial partner in the five-party Islamic alliance which achieved spectacular success in the last parliamentary elections and now governs the two provinces bordering Afghanistan. The alliance has demanded an end to the FBI-led hunt for Al-Qaeda fugitives in the lawless tribal regions.

This latest incident, however, has intensified the confrontation between the hard-line Islamists and the military-backed administration. The government says it does not intend to ban the Jamaat, but issued a tough warning that action could be taken if more evidence was found. There are strong indications that the US may consider including the Jamaat in the list of those supporting terrorists. Such a situation could have serious political repercussions for the Islamic alliance, and for Pakistan.