If Nagar is the culture capital of Tharparkar, Karunjhar is the embodiment of its wisdom and beauty. “Paraser, a mahatma, whose hymns are part of the Vedas, meditated some thousands of years ago, near the Teerath spring, up in the caves in the Karunjhar hills. This is the asthan of Shiva, a Hindu god. He was the father of Machganda, a female character in Indian mythology, who was born from the womb of a fish,” says Ali Nawaz Khoso, a living legend of Thar who is well-versed in Sindhi, Gujrati, Marwari, Kutchi and Hindi folk-wisdom and mysticism. He is one of a dying breed that identifies with a Sindhi-Kutchi-Gujrati cultural union. Khoso, standing at the foot of the hills, turns toward an army of mounds in the desert, and says, “These bhits preserve the secrets of wars, stories of lovers and treasures of heritage.” Nagar, he says, is a canvas painted in two different colours — Jainism and Hinduism. Lower Sindh and Kutch, once part and parcel of a Sindhi kingdom, were the hubs of Jainism and Hinduism, while upper Sindh was the centre of Buddhism. When the river Saraswati was flowing in the heart of Thar, and the Rann of Kutch was a gulf of the Arabian Sea, Nagar was a city of business and trade, with three seaports. The merchants were Jain, while the rest of the population was Hindu.

Several mandirs and ashrams spread around Karunjhar afford a magnificent glimpse into the magnificent architecture of a glorious civilisation. Within them are the remnants of treasures dating back across the centuries. Gori ashram, some 40 kilometers in the northeast of the hills, is a paramount holy place in the Jain faith. The Ashram was built between the second and third century AD. The miniatures painted inside the tomb depict the social structure and traditions of that time. “The paintings are the work of fairies and they come every night…”says Maho, the caretaker of the ashram. The work of art is truly magnificent. 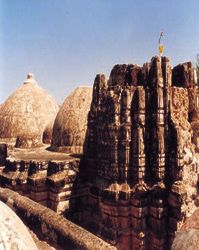 Kharrio Mandir, some 51 kilometers south of the hill, is considered to be one of the oldest mandirs in Nagarparkar. It is believed to be about 5000 years old. Sardhro, another temple at the start of the Gordharo stream, is a place of pilgrimage. At the temple of the water-pool here, Hindus perform rituals for the deceased. Near the pool was a fort, which was destroyed in 1859 by the British government. At the distance of a kilometre towards the south is an ancient stone statue of a cow, out of which water flows into the tank.

Viravah, a village some 24 kilometres away from Karunjhar in the northeast, is important on account of a series of Jain ruins, and contains the remnants of the old town of Parinagar in its vicinity. It is said that the city was founded in the fifth or sixth century BC and was destroyed in the twelfth century AD. This flourishing town has been reduced to a mound of bricks, and one small Jain temple remains. Mr. Giles, once Deputy Collector of the district, found the magnificently carved block of marble, which is now in the Karachi museum.

Bhalva, in the northeast of Nagar, is the native village of the legendary Marvi, a heroine in the poetry of Shah Latif Bhitai. Marvi, a respected daughter of Sindh, is still a symbol of patriotism. Travelling across the Thar, Mahmood Ghaznavi constructed the mosque of Bodesar after the conquest of Somnath, which now stands in ruins. The mosque resembles a mandir in its architecture.

The gypsy tribe, Rebari, is to be found in Nagarparkar. They rear camels for their livelihood. A Rebari woman wears black robes all of her life. “The Rebari is a tribe that remained loyal to Dodo Soomro, a brave king of Sindh who fought against invaders and got martyrdom,” narrates Ali Nawaz. The Rebaris are famous for distributing camel-milk free of cost. “Rebari women,” says Khoso, “wore the black dress as a symbol of grief on the martyrdom of Dodo Soomro.” And they still wear it.

Nawaz, an elderly man, recounts the story of war between Colonel Tyrwhitt and Karan Singh, in which Rooplo Kohli fought unto the last. He points out the tree where the British Army hanged him. He claims that the battle between Ram and Parsram, characters of Ramayan, a holy scripture of Hinduism, was fought in Karunjhar.

He knows about oceans of mysticism and streams of mythology and rides every tide of the desert. He explains karma, discusses current world developments and tells about the ghost of a woman that marches around the village, lantern in hand. He narrates various folk stories of the subcontinent. Nawaz has so much more to tell, if only he can find someone to hear his story.