When Misbah-ul-Haq scooped the ball over wicket-keeper Mahindra Singh Dhoni’s head on the third delivery of the final over bowled by rookie medium pacer Joginder Sharma, millions of Pakistani fans at home and all over the world literally rose to their feet in anticipation.

They thought the ball would make its way to the boundary at the Wanderers to nudge Pakistan that much closer to a title-winning triumph in the inaugural ICC World Twenty20 over arch rivals India. But they were watching the pulsating finale on their television sets and were deceived by the images they received. Because at the stadium, thousands of Indian fans were screaming like mad as S. Sreesanth pocketed the catch of his life at fine leg. Millions of Pakistani hearts sank. What a heartbreak!

The way Misbah slumped disconsolately on his haunches at the bowler’s end said it all. He had made a brave attempt at defying India, almost bringing Pakistan back from the dead, but for the second time in the 15-day spectacle, he had failed to deliver the killer punch. As Pakistan fell into deep agony, India celebrated what was their greatest cricketing moment since their World Cup triumph in 1983.

The celebrations weren’t restricted to India alone, though. Almost the entire cricket community made the most of the fun-filled party in South Africa that came just months after the long and boring 50-50 World Cup in the Caribbean. After the successful launch of the World Twenty20 on September 11, it seems that cricket will never be the same again. Even the most ardent of its critics admit that this slam bang format of the game has all the ingredients to lure more spectators to cricket stadiums and bigger audiences to television screens.

After having learnt from the World Cup debacle in the West Indies, the International Cricket Council (ICC) planned well for the Twenty20. But it wasn’t just their planning that helped the event become a success. The very fact that two of international cricket’s top draws — Pakistan and India — did not just do well in the contest but also made their way into a dream finale helped greatly. It was the shockingly bad performances of the old rivals in the World Cup earlier this year (both the teams were knocked out of the opening round) that played a huge role in spoiling that mega event.

The World Twenty20 got off to a splendid start when the host, South Africa, matched up with the West Indies to produce a run-fest at the Wanderers. Jamaican pinch-hitter Chris Gayle hit the first ton in the short history of Twenty20 internationals, and at one stage, it seemed that the West Indies would record an upset win over South Africa. But the host’s strong batting line-up delivered, and the match ended with an impressive win for South Africa.

The tournament got another shot in the arm with a pool match between Pakistan and India that ended in a thrilling tie. The Pakistani bowlers restricted India to 141, with medium pacer Mohammad Asif shining like a bright star. However, the Pakistani batsmen failed to reach what should have been a comfortable victory target, and in spite of a sparkling 53 by Misbah, they could post just 141 in 20 overs. It could have been a different story, but Misbah failed to score the winning run on the final two deliveries of the match. In the end, the match had to be decided on a ‘bowl-out,’ cricket’s equivalent to football’s penalty shoot-out. 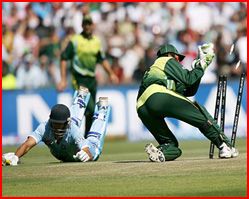 Before the start of the tournament, the event’s organisers had distributed handouts to the participating teams that carried information on the bowl-out rules. But it was evident that the Pakistanis didn’t bother to read it. They were completely unprepared for the bowl-out and their three bowlers, Yasir Arafat, Umar Gul and Shahid Afridi, failed to hit the stumps as India beat them 3-0 to win a memorable match.

Pakistan captain Shoaib Malik admitted after the match that he and fellow players were unaware of the bowl-out option. One wonders what he and the team officials were doing.

But in a way, the defeat against Pakistan turned out to be a blessing in disguise: Pakistan turned into a better side after their setback. The team comfortably sailed into the Super Eights of the tournament and began their campaign for semi-final qualification in style by beating the formidable side from Sri Lanka with relative ease. But their biggest win of the tournament came against world champions Australia, a result that virtually earned them a place in the final four. Once again, Misbah was one of their biggest stars and now the Pakistanis were looking towards the title. They shrugged off Bangladesh in the final Super Eights match to confirm a date with New Zealand in the semis. 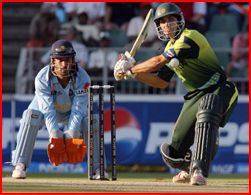 This prompted Shoaib Malik to give a statement saying that no team could stop Pakistan from lifting the trophy on September 24. He asserted that history would repeat itself, remarking that back in 1992, Pakistan won the World Cup during Ramadan after beating New Zealand in the semi-finals. And it seemed that Malik’s prediction might turn out to be true when Pakistan floored Daniel Vettori’s Kiwis in the semis. In the other semi-final match, India stunned Australia to set up a dream Pakistan-India final.

The Pakistani bowlers did superbly in the final, but were again let down by their batsmen. Top batters like Younis Khan, Shoaib Malik and Shahid Afridi fell, playing rash shots and, once again, the responsibility of carrying Pakistan through landed on the big shoulders of the 33-year-old Misbah. Pakistan needed 54 in the last four overs with four wickets in hands and seemed almost out of contention. Misbah hit four sixes and together with rookie all-rounder Sohail Tanvir got Pakistan within striking distance of what could have been their greatest cricketing moment since the 1992 World Cup triumph. But the talented Misbah, who had just played a handful of matches for Pakistan in 10 years, had not been bestowed with the additional blessing of a killer punch. He hit Sharma for a six in the final over and just needed to hit another one in the next four balls. But his feeble shot landed in the hands of Sreesanth. Instead of being hoisted into the air by his teammates, all the Mianwali-born batsman received were consolation pats on his shoulders by umpires Simon Taufel and Mark Benson.

It was the sort of final that the first edition of the ICC World Twenty20 needed, and it confirmed that this new format is likely to be the game of the future.