By Zahid Hussain | At Home | News & Politics | Published 13 years ago

The results of the October 6 presidential elections did not come as a surprise. Predictably, General Pervez Musharraf won by a landslide, but his victory remains clouded, pending a Supreme Court decision on his eligibility to stand for election while in uniform. So, despite his unofficial win, General Musharraf has to wait till at least October 17, to find out whether his re-election is legal. A favourable court verdict would secure him another five-year term. However, any reversal could provoke him to take extra-constitutional measures.

Speaking to reporters shortly after the votes were counted, General Musharraf refused to rule out any emergency action. But, at the same time, he did not specify whether he would declare a state of emergency if the court ruled against him. “Let them come to their decision, then we will decide,” he declared. He sounded confident that he would jump the last hurdle standing in the way of retaining power.

The October 6 presidential elections have gone down among the most controversial in Pakistan’s turbulent 60-year history. And that says a lot in a country where the military has regularly intervened in politics. It is the first time that a man in uniform was elected president in clear violation of the country’s constitution. Moreover, there is little hope that the Supreme Court will overrule his election. Still, while General Musharraf seems to have won this battle, the political crisis that has held the country in its grip for the past several months is far from over: the question of Musharraf’s legitimacy will continue to haunt the system. In fact, the farce will further weaken his political standing.

General Musharraf’s election victory is largely owed to the division in the opposition ranks. Both the Pakistan Peoples Party (PPP) and Jamiat-e-Ulema-e-Islam contributed in providing a degree of credibility to the elections. It is apparent that the resignation by the PPP lawmakers and dissolution of the NWFP assembly would have completely discredited the polls.

But the enforcement of a controversial National Reconciliation Ordinance (NRO) a day before the polls did the trick. The withdrawal of corruption cases against Benazir Bhutto and some other party leaders was enough for Benazir to pull back from resigning from the legislative assemblies. The ordinance, which has absolved corrupt politicians, is one of the blackest laws in the country’s history and was meant to buy over the PPP’s support. A day after the polls, Chaudhry Shujaat Hussain declared that the NRO was just a Machiavellian move, meant to divide the opposition. The deal has provided much needed credibility to General Musharraf’s re-election.

The ordinance will benefit not only parliamentarians facing corruption charges, but also political activists implicated in criminal cases. The two major beneficiaries of the decree are the PPP and the MQM. It is quite apparent that the NRO was a part of Benazir Bhutto’s power-sharing deal negotiations with General Musharraf. The new decree will ensure Ms Bhutto’s unobstructed return home later this month. 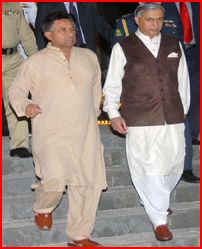 The one positive thing about the controversial ordinance is the pledge to set up a parliamentary ethics committee to prevent the use of corruption allegations to harass political opponents. The ordinance also claims to ensure free and fair parliamentary elections, due to be held early next year. To guard against fraud, election rules were changed to provide a copy of ballot results to all contesting candidates. But it remains to be seen whether these promises will be fulfilled. The statement from Muslim League leaders that the ordinance was just a political move may well be a harbinger of worse things to come.

Ms Bhutto said the ordinance would pave the way for a smooth transition from military rule to a civilian government. It is hard to imagine how the amnesty to politicians will strengthen democracy in the country. There is no dispute over the fact that successive governments used corruption cases to intimidate rivals, but this does not mean that the allegations were all baseless. Corruption is rampant in our political system, and as such, the NRO will only institutionalise the practice. Ms Bhutto also wanted a constitutional amendment to allow her to seek a third term as prime minister as well as a reduction in the president’s sweeping powers. A spokesman of the party said those issues could be resolved later.

The president, who has promised to take off his uniform after the court verdict, called for national reconciliation. He offered talks to the opposition parties that boycotted the polls, urging them to shun the politics of confrontation. “Let sanity prevail,” he said. But there is hardly any sincerity to this offer.

The president dismissed criticism that the boycott had undermined the legitimacy of his election, saying a vast majority had voted for him. “Democracy means majority, whether there is opposition or no opposition,” Musharraf explained to reporters on the lawn of his official residence. Most analysts, however, believe that despite receiving a majority of the votes, General Musharraf’s position remains highly tenuous until he is cleared by the court.

General Musharraf, who seized power in a bloodless coup in 1999, has held the dual posts of president and army chief for more than six years. Despite having placed loyalists in key positions in the military high command, Musharraf may not enjoy the same authority once he becomes a civilian leader. The embattled military ruler has appointed General Ashfaq Pervez Kayani, a former head of the the Inter-Services Intelligence (ISI) as the vice-chief of army staff. 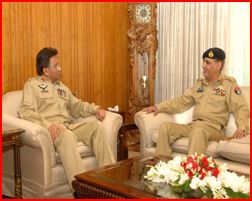 The promotion clears the way for General Kayani to become the army chief when General Musharraf retires from the military next month. As chief of the ISI, the US-trained general was responsible for the country’s anti-terrorism campaign and is considered one of President Musharraf’s closest aides. He has worked closely with US and British intelligence agencies in fighting Al-Qaeda. Being the senior-most officer, his nomination to the top post has not created any controversy.

A chain smoker, General Kayani is known as a man of few words and has kept a low profile in domestic politics until last month when he was involved in negotiations with Benazir Bhutto on a power-sharing deal. “He’s not driven by political ambition,” says a senior government official who has closely worked with him. “He fits ideally into Musharraf’s transition plan.” General Musharraf had showered huge praise on General Kayani in his autobiography, In the Line of Fire, describing him as one of the most competent officers.

Defence analysts have said General Musharraf’s appointment of loyalists at top positions is designed to consolidate his support base in the army as he prepares for the transition to a civilian role. Last month, General Musharraf appointed Lt General Nadeem Taj, another of his closest aides, chief of the ISI, which is engaged in the hunt for Al-Qaeda militants as well as providing internal security.

General Taj had served as General Musharraf’s military secretary and head of Military Intelligence. The control of the ISI is crucial to maintaining a firm grip on power. The spy agency is not only responsible for intelligence gathering, but also acts as a determinant of Pakistan’s foreign policy and serves as an instrument for promoting the military’s domestic political agenda. Defence analysts said the latest changes in the top brass indicated that General Musharraf was determined to retain control over the military as a civilian president.

The top post in the army remains a key position in Pakistan, which has alternated between weak civilian governments and military rule over its 60-year history. The army chief is now perceived as being the political centre of gravity. Politicians are likely to gravitate more towards the new army chief than a civilian president. But with loyalists in key positions, Musharraf is assured of the continued support of the armed forces, at least for the time being.

Musharraf’s transition from a military leader to a civilian president is not likely to erase the influence of the military from politics. Some defence analysts contend, however, that the military wants to remove itself from the political frontline to concentrate on counter-insurgency and counter-terrorism, as the rising militancy presents the biggest threat to Pakistan’s security. In any case, the army will continue to wield influence through the president.

Unfortunately, the prevailing political uncertainty has provided a huge space to Islamic militants. In the past three months, suicide bombers have relentlessly attacked army convoys, camps, mess halls and mosques. The extremists have killed more than 200 Pakistani soldiers, and tribal militants have taken more than 250 others hostage. Some analysts worry that the bitter political wrangling could distract Pakistan from its struggle against the Taliban and Al-Qaeda militants who appear to be consolidating their control over a swathe of territory near the Afghan border.