If the Muttahida Qaumi Movement’s honeymoon with the government continues, there is speculation that one of its two top-ranking leaders, Altaf Hussain or Dr Imran Farooq, may risk returning to Pakistan to take over the reins of the party. According to a source close to Hussain, there is also a possibility that Saleem Shehzad, another high-profile MQM leader, may be sent back in their stead.

Political analysts link Hussain and Farooq’s possible return to Pakistan to the conciliatory attitude of the present establishment, which is currently sympathetic towards the MQM. “Hussain has realised that one cannot run an army without the presence of a commander,” says a senior MQM ideologue. “Even the PPP and PML(N) have been badly affected by the absence of their leaders. It creates a lack of party discipline, reflected clearly in the performance of the MQM’s coordination committee, which has failed to work satisfactorily.” The MQM faced one of its worst crackdowns at the hands of the army and police from 1992 to 1995, which resulted in the killing of hundreds of its workers and militants. Thousands either fled the country or were jailed, which badly affected the structure of the party. Since 1992, the MQM has been run by a committee headed by a convenor, five deputy convenors and some party members.

Although insiders maintain that no final decision on who is to return has been made, the recent dissolution of the co-ordination committee is indicative of Hussain’s disenchantment with the MQM’s top hierarchy. “He feels that the party leaders are only interested in political games and have forgotten about the MQM movement and the welfare of their workers who have made many sacrifices for the party,” says an inside source. Following the MQM’s induction into the government, it has been alleged that party ministers and advisors have paid scant heed to the worker’s grievances. They have done little to look after the families of party members who were killed, or to secure the release of their party workers in jail. As a result, MQM workers have become disillusioned, claiming that the party, which was built on the support of the mohajir middle class, and which vowed to struggle against feudalism, the Pajero culture, and fight against oppression, has actually ended up becoming a part of that culture. “A few years ago, MQM leaders, ministers, MNAs, senators and MPAs used to travel on motor-cycles, even on buses. Now there are lines of brand new cars, mobiles phones and a whole new change in attitude. It has become a mainstream party like the PPP or PML,” said a disgruntled party member.

Workers were also shocked over the party’s decision to make Altaf Hussain’s father-in-law, Faisal Malik Gabol, an advisor. Tickets were also allegedly distributed to relatives of some party leaders, while recently the MQM had also started awarding party tickets to prominent Urdu-speaking intellectuals and bureaucrats such as Islam Nabi, Afzal Munif, Jamiluddin Aali, Sardar Ahmed, Asif Ahmed Ali, Saffan Ali, etc., who not being part of the party’s organisational structure or ideology are totally out of sync with the MQM ethos.

“A few years ago, while I was looking after the MQM’s women’s wing, two women activists came to me with a complaint. I was talking to Altaf Hussain on the telephone at the time. They expressed a desire to talk to him. As soon as they said “Bhai,” and before they had even identified themselves, Hussain recognised them and enquired about their health and their families. The two immediately forgot their grievances,” says former MQM Senator, Ajmal Dehlavi. Altaf Hussain’s greatest strength, says Dehlavi, is his personal rapport with the MQM’s common workers. “Ever since a few students of the pharmacy department of Karachi University elected him chief of the All-Pakistan Mohajir Students Organisation (APMSO) in 1978, he has continued to stay in touch with his party workers. This is why no one has ever been able to challenge his leadership,” says Dehlavi. 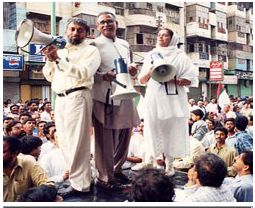 Hussain has also been disappointed with the party’s performance in the last elections, when two of his top leaders, Nasreen Jalil and Aftab Sheikh, lost to the Muttahida Majlis-e-Amal’s candidates. The current dissolution of the coordination committee is the second since the October elections. In the first reshuffle, Imran Farooq was suspended and remained under scrutiny for six months. By sacking the provincial minister for local government, Mohammad Hussain, suspending Nasreen Jalil for a week, and dissolving the central co-ordination committee in August, the MQM chief has set the scene for a major shake-up in the MQM hierarchy. Altaf nominated Dr Imran Farooq as convenor, and appointed a six-member ad-hoc committee, excluding stalwarts like Nasreen Jalil, Farooq Sattar and Aftab Sheikh, replacing them with party workers instead. This decision was welcomed by thousands of die-hard MQM supporters during a general workers meeting. Mohammad Hussain was the first official casualty in the party shake-up and was replaced by another party member, Wasim Akhtar, who was appointed advisor to the chief minister on local government. Although no official reason was given, a source close to the MQM said that the decision was taken on disciplinary grounds. “Hussain was not following the party line,” he says. “He confronted the city government unnecessarily on certain issues, which brought a bad name to the party.”

According to another inside source, a major shake-up is still on the cards along with measures to streamline and discipline the party. These include refresher courses for party workers, particularly the newcomers; elections for the co-ordination committee, sector and unit heads; the induction of new members into the party and the removal of those who do not agree with the party’s ideology. There are strong rumours that those MQM legislators and ministers who disagree with the party line will be given a choice: shape up or ship out. The party may not even be left with five deputy convenors. The appointment of so many convenors was intended to divide the burden of party work in the absence of Altaf Hussain and Imran Farooq, but the idea failed to work in practice.

However, sources maintain that athough there will be more discipline within the party after the shake-up, there is little chance that it will be able to revive its mohajir ideology once again. Workers are waiting to see whether Altaf Hussain will return to Pakistan or send Imran Farooq or Salim Shahzad, or both, in his place. “Organisational and structural changes are in the offing, but who will lead the party in Pakistan is still not clear,” says a party veteran.

High on the MQM’s agenda is finding those responsible for the murders of its top leaders and workers since the Musharraf government assumed power. Prominent among those killed were Khalid bin Walid, Nishat Mallick and Mustafa Kamal Rizvi. While the MQM has succeeded in abolishing the “No-go areas” and ended the domination of its rival, the Mohajir Qaumi Movement or MQM(Haqiqi), it has failed to secure the expulsion of Haqiqi leaders, Afaq Ahmed and Aamir Khan, from the country. Amir is in police custody, while Afaq is still in hiding.

The MQM’s relationships with previous governments has always ended on a sour note. In 1988, they formed a coalition with the PPP, but the agreement did not last for more than two years. The MQM then joined the PML(N) government twice in 1990, but developed serious differences both times. In notable contrast, however, the MQM’s partnership with the Musharraf regime has been remarkably smooth. But now cracks are beginning to appear over the issue of the construction of the Thal Canal and the Kalabagh Dam.

The million-dollar question now is: can Hussain afford to risk an anti-Sindh stance if Musharraf decides to go ahead with the Kalabagh Dam or the Thal Canal project, or will the MQM be forced to cut its ties with the establishment to retain its vote bank?