General Musharraf’s aides are burning the midnight oil working on a new plan to establish a system of presidential rule, as the increasingly contentious dispute over the Legal Framework Order (LFO) remains unresolved. The President sent out a clear warning when he declared that the Parliament would not survive if the LFO was rejected. With little hope of an agreement between the government and the opposition on the crucial constitutional issue, the military establishment may decide to wrap up the present political set-up and replace it with a French style presidential system, in which executive powers lie with the president, while the prime minister heads the administration. Sharifuddin Pirzada, that crafty legal constitutional wizard, is helping Musharraf’s men in engineering a constitutional device for the change. ” It is just a matter of how and when,” says a highly placed government source. “The modalities for a new system are already being worked out.”

There is a growing consensus in the President’s camp that merely replacing the prime minister may not help resolve the wider political problem. However, there is still apparently much confusion over the modalities of bringing in presidential rule in the face of an increasingly hostile and vocal opposition. According to highly placed government sources, several options are being considered that include a referendum, seeking a mandate from the Supreme Court or amending the constitution through Parliament after disqualifying a large number of opposition legislators on various grounds. The dissolution of the National Assembly is seen as a last resort.

The view at the President’s camp appears to have hardened after the Jamali government’s failure to bring the MMA on board and the inability of the ruling coalition to continue the parliamentary process which remains disrupted by the opposition. Addressing a group of parliamentarians last month Musharraf did not bother to hide his displeasure over the current paralysis in the government. His criticism of religious parties highlights the conflict between his views and the coalition’s soft corner for the MMA. The meeting also brought into focus the differences within the ruling party members. Prime Minister Jamali accused his ministers and the party men of non-cooperation. “No one listens to me, even the administration does not take me seriously,” he was reported to have blurted out at a meeting. This pathetic outburst was hardly the way for Jamali to restore confidence of party members in his own capabilities. Meanwhile, Jamali seems to have been galvanised into playing a more active role in the past few weeks after speculation about an inhouse leadership change did the rounds in Islamabad.

Musharraf has not only assumed the role of chief executive, but also seems to be guiding the cabinet. Most political observers agree that a change in the system would only formalize his role. One constitutional expert maintains Musharraf would need to amend only two clauses in the constitution to turn the present system into the presidential form. According to experts this can either be done through the National Assembly or Musharraf could choose to go for a referendum. 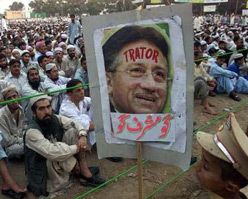 To amend the constitution, the government needs a three-fourths majority in the National Assembly. One way of achieving this is to push the disqualification case in the Supreme Court against those members holding a madrassa certificate. A Peshawar high court bench has already declared that a madrassa certificate was not equivalent to a university degree and the case is pending in the Supreme Court. There is a possibility that the government may now ask the court to expedite the case after the collapse of talks between the government and the MMA. According to one report, some 85 members of the National Assembly, the majority of them from the MMA, may lose their seats. There is also a move underway to disqualify some other opposition members for “disrupting the assembly”.

A referendum is also being considered to put the stamp of legitimacy on the proposed constitutional amendments. According to informed sources, the Supreme Court could be approached for an approval for presidential rule if other options cannot be worked out. The dissolution of the National Assembly and the wrapping up of the entire system is yet another option if the present political crisis spins out of control.

However, it’s not going to be smooth sailing for Musharraf on any of these options. Most political observers agree that these moves will only exacerbate the political crisis and ultimately threaten Musharraf’s own survival in power. After the last referendum disaster, another one will not have any legitimacy whatsoever and neither will the Supreme Court ruling. It will only serve to further unite political forces, which are already baying for Musharraf’s blood. Any forced change of the political system will generate its own dynamics, which Musharraf will not be able to control even with the full backing of the military. It will also have serious international consequences, as it would be viewed as a return to complete military rule, this time devoid of even the garb of democracy.