Recognising her calling as an artist, more late in life than early, Shammi Ahmed worked for years under her mentor, Jamil Naqsh, whom she continues to regard with respect bordering on reverence, regularly showing him her work for appraisal.

The title of her statement ‘A Matter of Reverence,’ published in the catalogue accompanying her second solo exhibition held at Tanzara Gallery in Islamabad, is testament to her faith in him. She clearly acknowledges his contribution to her artistic development. With Naqsh now based in London, Shammi rolls her canvases into her luggage and transports them there, painting in his studio, awaiting his verdict. 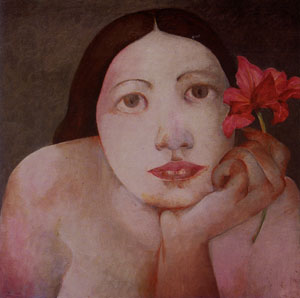 As the sister of Naqsh’s partner Najmi Sura, Shammi has long been exposed to the creative process of both artists, as well as to art in general, for which she showed a keen appreciation. The inspiration for her work, however, has always been Naqsh. Although self-taught, she had the great advantage of apprenticeship under the master of form and colour, whose stylistic influences are traceable in her subject and technique. Her other admitted influence is the work of that 20th century genius, Picasso who revolutionised western art.

Originally occupied with the Momart Gallery in Karachi — which she established in 1994 and continues to run till today — the artist initially curated several themed group shows. During this period she experimented and then began to concentrate seriously on painting, very much in seclusion, rarely showing her work. It was later in the ’90s that she participated in a calligraph-art exhibition, curated by Ather Tahir, at the Alhamra Cultural Complex in Lahore. Winning the third prize encouraged her to exhibit in group shows. She continued to do so for many years but, it was not until 2007 that she had her first solo show at Zenaini Gallery in Karachi.

Shammi’s extended apprenticeship of over 15 years has led her to perfect her passion for colour and texture under the expert eye of her mentor. Executed in oil paint — always harder to handle than acrylics and the preferred medium of most painters today — her paintings reveal a skilful handling of colour, reminiscent of the maestro’s. She applies them in near-transparent layers, giving skin, flowers and backgrounds a soft, ethereal appearance. This layering and overlapping of colour, a time-consuming endeavour when using oils, ensures their translucence. The stylised women that she portrays appear as idealised visions of femininity in the 20th century. Their features are similar, as if cast from a single mould. They are wide-eyed, reflective, innocent, even naÃ¯ve. This aspect of her work has not changed since she began to exhibit, although in some of her earlier work the colours were bolder and the features of her women were divided into clearly delineated planes. In her present work, their faces are softly sculpted and most of them hold or concentrate their gaze on a flower. 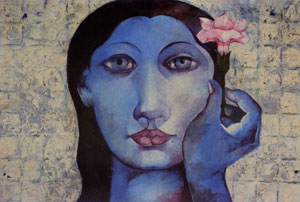 Shammi Ahmed has perfected her passion for colour and texture under the expert eye of her mentor: Jamil Naqsh.

The two enfolded nudes in this exhibition, which are reminiscent of Gauguin in their form, have this same flower-like appearance. They are almost like a bud on the point of blossoming. It is as if the flowers themselves symbolise these very traditional attributes of womanhood: perfection, gentleness, innocence. Several canvases depict two faces: in two of them, a veiled woman appears alongside an unveiled figure, proffering a flower. There is no suggestion of duality, comment or question. Instead, her paintings are like a still pool reflecting calm and beauty. A world away from the world, much as the catalogue’s title states; far from the harshly politicised arena of much contemporary visual art where social or political and now environmental statements often take centre stage.

And yet if one looks around, there are plenty of Pakistani artists who concentrate on painting beautiful women, coexisting with those who would prefer to focus on the gritty realities of life. There is a thriving pool of collectors for this genre. These works seek to create perfect texture, form and composition, and while there is a lack of visual clues to add thematic depth to her vision, Shammi Ahmed’s works succeed because there is no doubt about her skills as a painter.

This article originally appeared in the November 2010 issue of Newsline under the headline “Reverent ProtÃ©gÃ©.”