Since the 1985 accidental death of a young Mohajir girl by a Pathan bus driver became a watershed for ethnic conflict in Karachi, sporadic eruptions of violence have become par for the course for the 18 million inhabitants of the world’s third most populous urban centre. Collateral damage: Karachi now has the dubious distinction of ranking among the planet’s most dangerous cities.

The 2010 January-October death-by-murder graph for the city, stood, by police records, at 1,131. Of these, 273 were ostensibly mafia-style hits — the by-product of multi-dimensional wars being fought on Karachi’s soil.

It is as much a battle for the city’s soul as it is for land, lucre and power. Crime and politics play out on the city’s labyrinthine streets, often in the garb of ethnic and sectarian strife. And against a backdrop of suicide bombings and spottings of known Al Qaeda/Taliban terrorists in the city, there are also some imported conflicts. “Karachi seems to have become the arena for all of Pakistan’s wars — and some global ones as well,” says a political analyst. The all-too recurrent fallout: a complete shutdown of the country’s industrial hub and economic jugular. The source of between 50—60% of the total tax collection by the Federal Board of Revenue and the generator of 20% of the country’s GDP, a shuttered Karachi directly and direly impacts the Pakistani economy.

There are the known mafias, those dealing in extortion, drugs, arms, and currently the most bitterly fought-over commodity — land. Battle lines between the Pathan and Mohajir communities in Karachi have long been drawn and turf wars fought. But with new political alliances, migration and changing demographics, the lines have become blurred.

The massacre at the Shershah scrap bazaar was a chilling indicator of Karachi today. Although a relative calm now prevails, with the political representatives of Karachi’s two major parties, the ANP and the MQM continuing to up the ante with inflammatory rhetoric, there is justifiable fear that this is just another temporary lull. 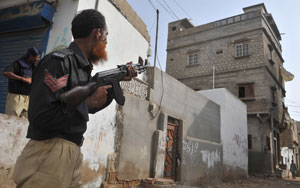 Although the government claims to have identified and arrested some of the perpetrators of the Shershah killings — members of the deceased Rehman’s Dakait’s criminal gang in Lyari, now under the stewardship of another known mobster Baba Ladla — the MQM still remains suspicious of the intentions of its coalition partner, the PPP. It maintains that the latter is working in a “nexus with the ANP,” to destroy the MQM.

The party also has issue with the recently formed Amn Committee in Lyari, which it dubs “a criminal enterprise” created to work against the MQM. The party’s website states: “MQM has strongly condemned the unrestrained violence in Karachi by the terrorists of ANP and the Peoples Amn Committee installed by the government of Pakistan Peoples Party.”

Provincial Interior Minister Zulfiqar Mirza for his part denies any connection between his party and the Amn Committee, declaring that members of the MQM were not just present at the launch ceremony of the group, but, in fact, chief guests at the occasion.

The ANP, meanwhile, is still bitter about the conflagration on May 12, when 90 Pakhtuns were killed allegedly by MQM activists in incidents graphically captured on camera, and subsequent target shootings of Pathans have done nothing to defuse its ire.

Accusations, counter-accusations and recent arrests notwithstanding, there are widespread allegations by diverse civic bodies of government patronage of criminal gangs, particularly in Lyari, and of the ANP’s criminal element for the PPP’s own vested interests — among them land-grabbing. 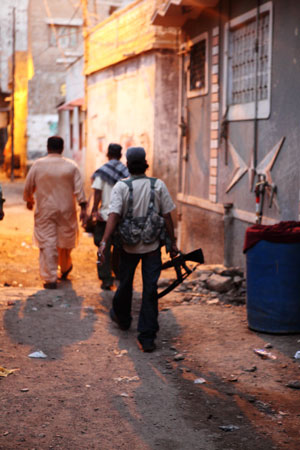 Above the law: Weapons are commonplace in Karachi and are carried openly in the streets.

Political commentators are of the view that apart from monetary yield, the illegal acquisition of land also fits in with successive governments’ bids to increase their electoral mandates. “The PPP’s allying with the ANP in Karachi is not just to neutralise the MQM, but also to acquire land in conjunction with a party that is synonymous with the land mafia. By distributing land among new settlers and allocating plots to select groups, the current administration is actually increasing its hitherto limited vote bank in Karachi,” says one analyst.

Land-grabbing has other dangerous dynamics. It leads to the ghettoisation of communities with residents often fighting for space and whatever limited infrastructure there is. As evinced by bloodbaths past in Orangi and Qasba Colony, often these altercations result in bloody conflict — and this in large part owes to a heavily armed citizenry.

Due to the steady stream of arms pouring into Karachi, serving since the ’80s as a conduit for weapons from the West for one or the other war being fought in Afghanistan, large caches of weapons found their way to the local arms bazaar. Besides the more basic Kalashnikovs, current arsenals reportedly contain sophisticated mortars and Uzis.

With federal Interior Minister Rehman Malik himself acknowledging that there are over 30,000 illegal arms licenses in the city — and each can fetch up to 10 weapons — the prospects for peace any time soon appear dim.

While the provincial interior ministry has laid out a deweaponisation plan alongside a witness protection programme, talk of an imminent crackdown in Karachi has engendered more scepticism than optimism. Although Sindh Interior Minister Zulfiqar Mirza unequivocally states that the operation will be “even-handed” and “across the board,” and recent arrests belie his links with the Lyari criminal network, apprehensions continue to mount in MQM circles. “This is a get MQM operation under the guise of a non-partisan clean-up of the city. It evokes terrible memories of the army operation in Karachi in the early ’90s,” says an MQM legislator. 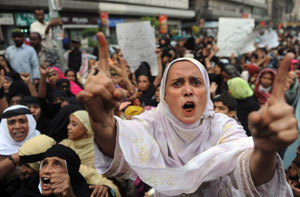 The recruitment to Karachi’s police force of what MQM activists contend are 2,500 PPP supporters — with 500 of these belonging to Lyari — and over 1,000 transfers of police personnel, is also viewed as a vehicle by which the government will put the squeeze on the Muttahida. Said MQM Senator Farooq Sattar, “The PPP in Sindh is using the police as its personal handmaiden.”

How Operation Clean-Up 2010 plays out, only time will tell. Meanwhile, the city waits to exhale.

Newsline speaks to the major stakeholders in Karachi and some concerned citizens for their take on their city at war and peace.