In Khipro’s Sanghar district, many parents have pulled their young girls out of school. This, after the shocking gang rape of a young 17-year-old student of class nine.

In the last week of September, four young men raped Zainab Bhayo and made a video recording their heinous act, which they then uploaded on several Internet websites including YouTube. The police have managed to arrest the culprits, Danish, Waseem, Jahanzeb and Suhail Kaimkhani, and put them behind bars. But parents are not taking any chances. “This is not the ideal environment to send girls to school. We are more concerned about their honour than their careers,” they say.

Incidentally, Bhayo’s case is not the only one of its kind. It is widely speculated that groups of youngsters are involved in cyber blackmailing in not just Khipro, but other areas like Digri, Mirpurkhas and Sanghar as well.

Many families who have been subjected to similar blackmailing tactics by these youngsters — who have shot videos of their attacks on girls and have distributed them through their mobile phones — have not reported the incidents, for fear of public humiliation and disgrace. Shockingly, some fathers have even offered money to the culprits to prevent them from publicising the videos and bringing shame to the girl and her family. Reportedly, a Hindu businessman in Khipro was shown a damning video of his daughter on the day of her marriage, and he doled out a huge amount to the culprits to prevent them for creating any problem for the new bride. Subsequently, the family migrated to India.

Allegedly, the criminals who were arrested in the Bhayo rape case are also involved in several other cyber crimes. What made their task easier was the fact that they ran a mobile phone shop in Khipro. It has also been discovered that the culprits trapped girls by tracing their mobile numbers. Apparently, it is a common practice to share numbers of girls who recharge their pre-paid balance through easy-load at their corner stores or mobile phone shops. After tracing these numbers, they send messages or make phone calls to them. Many innocent girls are trapped in this manner and later exploited.

When I visited Decent High School in Khipro a few weeks after the incident to find out if stories of parents pulling their girls out of school following the Bhayo incident were true, terrified girls covered their faces and closed their classroom windows to hide themselves from public view. Shockingly, five out of a total of 10 class-rooms were completely empty, while the rest of the classes had sparse attendance. “After the incident, the attendance of girls in schools has dropped by a little more than 40%,” says Mir Muhammad Rajar, president of Government Secondary Teachers Association, Khipro. 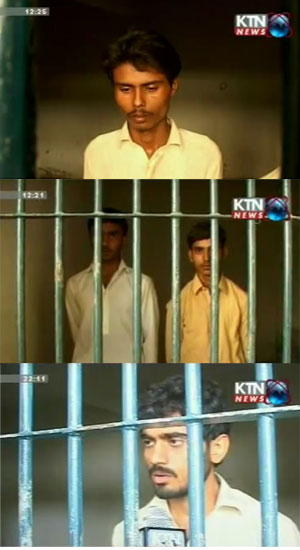 The men accused of the rape of Zainab Bhayo have been arrested. But will justice be served?

The incident has also created a sense of insecurity among women employees in the district, which is said to be relatively liberal. Incidentally, most of the educated women in Khipro are employed as teachers and lady health workers in government and private institutions. “We have observed a visible decline in the number of female workers in the education and health departments since the rape incident,” says Lala Ayub, a local journalist.

“I do believe that such incidents of harassment will discourage female participation and further increase the vulnerability of women, especially if society and the government do not take any serious action to provide security to these girls. I have met many demoralised families, who have shifted from small towns to villages due to the fear of cyber technology being misused for such criminal acts,” says Aamar Sindhu, a representative of Women’s Action Forum.

This incident has also created ethnic tension between the Mohajir and Sindhi communities. Soon after news spread about the video, many demonstrations were held against the culprits, who reportedly belong to the Urdu-speaking community. Fiery speeches by angry mobs on the occasion could have triggered ethnic riots as Sindhi nationalist leaders, who led the demonstrators, called it an attack on their honour and urged immediate arrest of the culprits. Out of fear of revenge, the Kaimkhani community has stopped its girls from going to educational institutes. “We cannot risk sending our girls to school because in the wake of the recent incident, we fear that our girls can be targeted,” a member of the Kaimkhani community said.

The trend of committing criminal acts through uncontrolled SMS services, manufactured videos and cyber bullying has alarmingly increased. Unfortunately, Pakistan has no law to deal with cyber crimes. And in the absence of a law, culprits continue to misuse information technology with impunity. In 2007, during Musharraf’s tenure, Prevention of Electronic Crime Ordinance was promulgated and the present government had endorsed it — with slight modifications. However, it has since been allowed to lapse. Legislators have since turned a blind eye to these types of cyber crimes, which are particularly targeting women. So have the police. Recently, the cops in Mirpurkhas refused to register a cyber crime case against Fahim Mughal, who had fraudulently obtained pictures of a local bank officer’s daughter from a mobile phone and prepared a video from these images, and uploaded it on YouTube.

In the Zainab Bhayo case however, they have nabbed the culprits and registered a case of gang rape. Even so, it is feared that the culprits may not be given exemplary punishment. This may, in turn, set a bad precedent for other cyber criminals waiting in the wings.

“Let the court decide,” says the chieftain of the Bhayo tribe. “If justice is not done, then we will settle the issue in accordance with our tribal customs.”