By Ayesha Siddiqa | Published 10 years ago

Violence has become a permanent feature of everyday life in Pakistan. The country is flush with arms. From small pistols to Kalashnikovs to hand grenades to rocket launchers — anything and everything is available in this country’s arms bazaar. It was the military dictator General Zia-ul-Haq who introduced this country to gun culture, when he aligned with the Americans to battle the Russians in Afghanistan. Weapons intended for the jihadis found their way into the market and there was no way of checking this proliferation.

Pakistan’s location as a transit route for drugs and weapons which flow across Afghanistan or Pakistan’s tribal areas to the rest of the South Asian region, didn’t help matters. By the end of the ’80s, other conflicts, such as Pakistan-India’s proxy war in Kashmir, had also resurfaced. The easy availability of weapons that fall in the category of Small Arms and Light Weapons (SALW), the ascendancy of non-state actors who were used by state actors to fight their proxy wars, and the growing importance of weapons as a status symbol, changed the social and political dynamics of this region.

Many people argue that the light weapons that we see today on the streets of Pakistan are those left behind after the end of the first round of the Afghan-USSR war during the 1980s. This is partly correct. SALW have a high attrition rate, which means that these weapons can be destroyed very easily. But some of the 1980s-era weapons have survived only due to fresh refurbishment — allegedly through the SALW illegal production industry in the region and the constant inflow of weapons from porous borders. For instance, there have been many instances of private smugglers from the West buying illegal weapons and air-dropping them in trouble spots such as Assam, India or northern Sri Lanka.

In Pakistan’s case, the production of illegal weapons in the tribal areas became a major source of gun-running. Traditionally known for their gun-producing cottage industry, these areas became huge production centres overnight, that catered to the national demand for illegal arms. At the beginning of the 1980s, a Russian-made Kalashnikov AK-47 cost Rs 80,000 — 100,000. By the end of the ’80s, the same weapon indigenously manufactured cost Rs 20,000 — 30,000. Gun manufacturers in Darra Adam Khel — a small town on the border of a tribal and settled area near Kohat — became profit-oriented, and when I visited Darra Adam Khel in 1995, there were over 150 gun-producing units, each with the capacity of making 100 weapons a day. Although some manufacturers still made traditional guns, the majority were busy earning money. Others benefited from this business as well. An AK-47, which cost its producer Rs 3,000 — 5,000, would eventually sell at Rs 25,000 — 30,000 — enough to feed different people including the transporter, who was responsible for carrying illegal weapons to the final destination, and the customs official, who had to be bribed to let the weapons pass through. In Darra, you could walk in and purchase any kind of weapon at any time. These illegal manufacturers were known for copying any kind of SALW, including shoulder-fired missiles. People often complained that these “copies” were not of the same quality as those of the original manufacturers, but they served their purpose. At a later stage, Darra manufacturers also found a way to circumvent the law. For instance, Pakistan’s weapons ordinance divided weapons into two categories: prohibited and non-prohibited bore. A .32 pistol gun classified as non-prohibited, while a .38 bore pistol or gun was prohibited. Not many people were given licenses for prohibited bore weapons. Manufacturers adapted prohibited bore technology to non-prohibited bore weapons, and thus the .222 and .223 shotguns were made into semi-automatic versions, which increased the lethality of the gun. 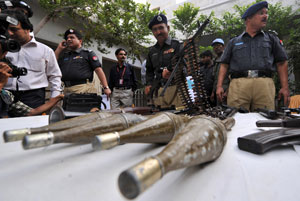 The influx of weapons was also encouraged as a result of lax controls. Since weapons were regarded as a symbol of power, civilian governments had a tendency to reward people with licenses of prohibited bore weapons. A licensed weapon bears the number of the weapon as noted on its license, for inspection purposes, when required. This is where Darra manufacturers came in handy. Illegal gun-makers were able to etch any number on their weapon, which meant that multiple weapons would be available in the market, listed under the same license number.

Considering the violence and loss of life caused by this category of weapons, the UN decided to call a conference on the prevention of the spread of small arms and light weapons in 2000. It was based on the conclusion that while nuclear weapons were considered to be the weapons of mass destruction, SALW fell in the same category, as a high number of people were dying due to the use of these readily available weapons. Continents like Africa provided evidence of the destruction caused by SALW. In Pakistan itself, crimes against women and other underprivileged groups increased with the spread of these weapons. Focused mainly on the African case, the UN conference aimed at streamlining the production, sale and trafficking of SALW. There was also a proposal to establish a UN-SALW register on the pattern of the UN conventional-weapons register in which the manufacturing states volunteered information on the number of weapons they produced and sold every year. Moreover, there was insistence on regulating the business of production and the supply of these weapons in individual states.

The Pakistan government, headed by Pervez Musharraf at the time, responded to the UN call by launching a de-weaponisation campaign — the first of its kind in Pakistan. By then, Pakistan’s illegal arms industry had mushroomed. The ministry of interior, under the command of Lt Gen (retd) Moin-ud-Din Haider, embarked upon a mission, recalling licensed weapons for re-registration and announcing an amnesty for people who turned in their illegal weapons.

At the end of the general amnesty period on June 20, 2001, that allowed for voluntary surrender of weapons, the Surrender of Illicit Arms Act 1991 was enforced in the country. The crackdown phase that commenced on June 21, 2001, was successful in recovering close to 25,000 weapons, and resulted in the arrests of 9,663 people, in two months. According to Salma Malik of Quaid-e-Azam University, the recovery approximated about 400 weapons per day, an encouraging figure that later showed a marked decline. 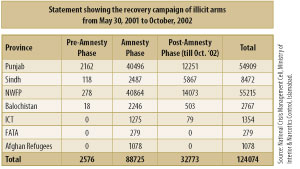 First, there was no real evidence of any marked improvement in the recovery of illegal weapons. The average recovery of weapons was the same as the number of weapons the police are expected to recover annually as part of their performance parameters. Moreover, there is no account of the recovered weapons, which are supposedly kept by the police in safe custody. A lot of these weapons silently disappear. Some are stolen and others are borrowed by influential people for which there is a legal procedure. The likelihood of these weapons making their way back into the market or the society is very high. A better option would be to destroy the weapons through a transparent method. Moin-ud-Din Haider’s interior ministry did publicly burn the weapons a couple of times, but discontinued this practice afterwards.

Second, the recovery figures were misleading as the ministry counted every single unit (even a bullet, for instance) as a weapon. This meant that the figure quoted was an inflated one. The actual number of guns and pistols was far less.

Third, many weapons recovered or surrendered were actually “old equipment.” Even the police departments from all four provinces were known to advise and encourage people to surrender old equipment. In fact, the police of district Jhang and Peshawar were rated the best for recovering the maximum number of weapons in this manner. The Peshawar police, for instance, was known to convince illegal manufacturers to surrender old equipment, which was then publicly burnt — a clever publicity stunt. And there was no record of the number of weapons set on fire.

The developments after 9/11 took the steam out of the de-weaponisation campaign. At the global level too, the campaign is not successful due to the strong American gun-lobby, which does not allow Washington to follow the UN resolution.

Are we then destined to live in a world full of weapons?