For a process that Musharraf and Prime Minister Manmohan Singh have often boastingly described as irreversible, the present state of bilateral negotiations looks disastrous.

India is threatening punitive action in case its cross-border concerns are not adequately addressed, while Pakistan is saying enough is enough, ominously mentioning words like “nuclear holocaust.” As Washington and the world rivet attention on Israel’s war in Lebanon, even the usual good offices of the interested brokers aren’t available for mending the South Asian neighbours’ broken fences. So while the two countries are — fortunately — a sane distance away from relapsing into jingoistic posturing, the warmth of friendship is fading fast. What happened to the much-publicised labour of the peace-makers love?

One answer is easy to give: the Mumbai blasts. The ferocity of the sophisticated attacks killing over 200 people and injuring many more has left the Indian administration baffled. In the absence of any convincing leads to track down the perpetrators of Mumbai’s murderous mayhem, the establishment followed the safe and familiar path of turning the heat on Islamabad. This gut reaction defined the subsequent pattern of the mood in both the capitals, with Delhi stepping up the ante and Islamabad slowly taking off its kid-gloves.

With hindsight, it can be said that Islamabad moved half-heartedly into the latest sparring bout. For at least 48 hours after the train-blasts in Mumbai, a pall of unease hung over Pakistan’s decision-making circles. As India went through the agony of counting their dead, and TV analysts spewed myriad quick-fire theories about the hows and whys of the incident, Pakistani officials issued a strongly worded condemnation of the blasts in the hope of reassuring Delhi. They went into a wait-and-see mode holding back any commentary lest that should be seen in a negative light by India. Yet even in that temporary phase of verbal paraplegia, the unstated expectation was that perhaps this time round the Indian finger would not point across the border.

To give this expectation a concrete form, Pakistan’s foreign secretary Riaz Muhammad Khan made a condolence call on his Indian counterpart, Shyam Saran. Politely and tactfully, he also raised the issue of the new schedule of talks. To this Mr. Saran’s matter-of-fact answer was, “We will let you know.” For senior foreign office officials, the response from Delhi was crucial in testing the limits or potential of the peace process. “We have invested too much time and energy in the whole effort to see it getting blown away by the blasts. If that happens, it would be a real tragedy,” says one of the officials who had almost finished a brief for the secretary-level review talks in Delhi.

That ardent wish for avoiding real tragedy did not last long. While the composite dialogue did not suffer an instant or total collapse, it went into cold storage as the Indian Prime Minister publicly took the stand that the planning for the bomb blasts had support from across the border (read Pakistan). The Indian ministry of external affairs followed that up with an official communication to Islamabad’s High Commission in Delhi on July 15 that, on account of the Mumbai blasts, the talks would have to be indefinitely postponed. The communication did not allude to any involvement of Pakistan in the incident. Yet it was clear that the Indians were not listening to Islamabad’s, ‘let us stay together in adversity,’ theme.

But perhaps taken in by their exaggerated faith in the strength of the peace process — cited as one of the biggest achievements of the present government by the president down to the Union Council-level politicians — the hardening of the Indian posture was still seen in a charitable light by the members of the policy-making management. 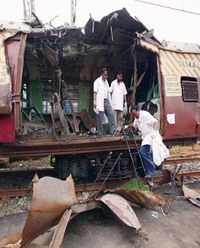 It was perhaps for this reason, that while showing disappointment with the postponement decision in public, Pakistani officials continued to be optimistic in private about the resumption of the dialogue process. It is a dampener on the peace process, but it is not the end of it. “The two countries have come some way forward on this road and I do not see a reversal in this movement,” said a senior Pakistan foreign office official in Islamabad. He also said that Pakistan’s policy is not to sully the environment by getting into a verbal spat with India over the postponement.

“If you expect us to issue stinging counters to the veiled allegations that somehow Pakistan-based groups are involved in this act, then forget it. Our present policy is to hold tempers rather than excite them. We have denied these charges firmly and have offered our co-operation in the investigation if any evidence is provided to us. But this is all,” the official said. Though that sounded like a fairly balanced position, more than that it showed the difficult balancing act Islamabad was trying to maintain: it was avoiding a tongue-lashing contest with Delhi, without being seen keen on accommodating Indian concerns over counter-terrorism efforts.

Yet this “costly distraction” is very much there. The Mumbai blasts have only brought it to the forefront in a crass fashion. The two sides’ military planners have never factored out an immediate war threat from their calculations. Side by side with the peace process, even when it looked rather promising, their war preparation has been moving alongside. Delhi’s recent military exercises practiced the aim of cutting the target (Pakistan) into half. Pakistan’s planning maps show India as an enemy whose sole aim is Pakistan’s total subjugation.

Pakistan’s upcoming 5.1 billion dollar defence shopping spree from the US, including 18 new and 26 old F-16s worth three billion dollars, is indicative of the prevailing hostilities. The deal has been prompted by the long inventory of defence purchases India is expected to make in the coming months.

So while time has indeed been invested in building a momentum for peace, billions have also been earmarked for future conflicts. This paradox is at the heart of the present crisis of talks between the two countries. Their respective commitments to peace are born of different but expedient circumstances. For Pakistan, peace- diplomacy is as much for refurbishing a good global image as it is an acceptance of the futility of the war option. For India, peace overtures are more a bargaining chip with Washington for formalising its role as a global power, and a piecemeal ploy to engage a much smaller, though dangerous, neighbour. There is no well-thought and genuine peace philosophy that has accompanied the composite dialogue which, in realistic terms, is better described as a compromise dialogue.

It is a reflection of the fragility of the peace process that Islamabad too is relapsing into its usual ways of looking at India. The corridors, once clogged by peace-pushers, are now witnessing a growing traffic of cynics and critics of the whole idea of engagement with India. A feeling is growing in Pakistan that Delhi’s mindset has not changed much, even after three rounds of composite dialogue. India’s move to put the talks on hold has reinforced the argument that the dialogue is going nowhere except around in circles.

President General Pervez Musharraf had his ear bent towards the hawks on India when he first considered and then rejected the idea of calling up Prime Minister Manmohan Singh after the Mumbai blasts. The president’s call to Prime Minister Manmohan Singh would have been incongruous because immediately after the incident feelers were being sent through the media that sooner or later the old charge-sheet against Pakistan would come up again. Also, every time something happens in India, a call at the highest level from Pakistan should not be expected. “We have had some serious terrorist attacks here in Pakistan, but never has there ever been official condemnation of these from India,” says a close aide to President Musharraf. This feeling was further fuelled by the absence of any response from India to the killing of a prominent leader of Muttihida Malis-e-Amal (MMA), Allama Turabi, in Karachi in a suicide attack three days after the Mumbai blasts.

Another one of Musharraf’s confidants, also the main architect of the present posture towards India, explained the context in which the Pakistani President seems more receptive to his ideas. “We have been very patient with the Indian allegations in the past and have not been provoked into counter-allegations. But it is difficult to keep wearing a welcoming smile for peace when evidence is growing that Delhi has been deliberately and methodically fanning a veritable secessionist movement in Balochistan. We are all for the dialogue to resume, but we are not going to walk the extra mile on a path strewn with unsubstantiated charges and conspiracies to destabilise Pakistan,” says the official.

The Balochistan card is the newest charge that Islamabad has levelled against Delhi. Initially, only hints were dropped at the possible involvement of India in fomenting trouble in the area. But now, intelligence chiefs explain this role with the help of what they call, decisive evidence, detailing money and weapons supply routes.

These allegations mark a precipitous low in the dialogue process. Restraint on mutual recrimination is what the two sides have tried to tackle in their dialogue because of the infectious nature of this exercise and the damning impact it has on the general environment for negotiations. With that restraint gone, the sky is the limit for the present propaganda surge.

There is little evidence to suggest that President Musharraf and the foreign policy establishment would pull their punches in the face of Delhi’s hard hitting statements.

The Pakistan Muslim League, the ruling party, is just a year away from elections, while President Musharraf himself will be pitching himself for another term in less than eight months. He and the party he supports cannot afford to be flying for peace on an apologetic wing. No wonder then that for now, raiding the suspected hideouts of jihadis on India’s demand is not an item on President Musharraf’s agenda. Even though he has been the most ardent champion of the cause of this peace process, gloriously claiming its success at every forum, he cannot escape the new reality — that for now, the talks are dead in their tracks.

There is even less chance of a response from Islamabad to Delhi’s’ demand of firmer action against cross-border infiltration. That would only change if and when Delhi produces evidence to back up its claims. In fact, the probability of a toughening of Pakistan’s position is considerable if Delhi persists with pre-conditions of stronger actions against what India alleges are home-grown terrorists. But even as the hostility heats up and dreams of a peaceful subcontinent begin to grow cold, efforts are on to save the remains of the composite dialogue.

Says a senior foreign office official, “Who said burying decades of animosity is easy? This needs time. Peace processes are problematic. Look at the world, from Sri Lanka to the Middle East, it is the same everywhere.”

The example is instructive, but for a totally different reason. From Sri Lanka to the Middle East, all broken peace processes have resulted in bloodshed, killing and war. A stalled dialogue process should be the cause of worry rather than smug satisfaction.