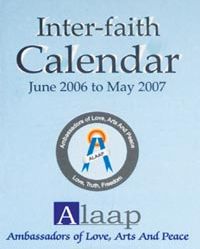 Finally, a calendar with a difference. Alaap, a Lahore-based organisation working towards the promotion of religious tolerance in the country, has printed an inter-faith calendar for the year June 2006 to May 2007. The calendar creates religious awareness by devoting ten of its pages to ten different religions practised in the subcontinent. Write-ups delineating the tenets of the religions are illustrated with photographs of the houses of worship, accompanied by a verse/saying from the holy books or religious leaders.

The 14 remaining pages feature religious figures. A photo or sketch of each is accompanied by a small biographical note, and more interestingly, quotes from the person. Too many of the religious leaders, however, are Muslim, giving inadequate representation to other religions, some of which are not represented at all. Many interesting people are covered though, such as Rabi’a Basri, and quite a few are Sufis that promote Alaap’s own claim of being “Ambassadors of Love, Arts And Peace.”

An interesting and useful aspect of the calendar is that it lists the holidays and festivals of each religion for every month.

Though an interesting and revolutionary attempt, the calendar could have been a bit more attractive in terms of design and layout, and the print larger and clearer. However, it is an admirable initiative to promote sectarian harmony and religious tolerance in a country which has little of either.