Since 9/11, Muslim militancy has hogged the headlines. This phenomenon has provoked a global interest in the relationship of identity, faith, and violence, with a particular focus on Islam. Books such as Identity and Violence by Nobel Laureate, Amartya Sen, and art exhibitions like “Without Boundary: Seventeen Ways of Looking” — a survey of the works of a number of contemporary artists who hail from the Islamic world — held this spring at the Museum of Modern Art (MoMA) New York, are recent examples of the various forms of intellectual engagement that this enquiry is taking.

In his book, Sen pleads with his readers to acknowledge and embrace the plurality of our identities: “the same person can be, without any contradiction, an American citizen, of Caribbean origin, a Christian, a liberal, a woman, a vegetarian, a long-distance runner, a historian, a feminist, a heterosexual.” Sen’s prescription for peaceful co-existence is to avoid, what he calls, the “solitarist” approach, ‘under which people are neatly, but very wrongly, partitioned into Western or Eastern, Muslim or Christian or Hutu and Tutsi, or even being Pro-Globalization and Anti-Globalization — with no space for the assumption and exercise of other identities.’

Fereshteh Daftari, who curated the MoMa exhibition, addresses the ambiguity of identity in art in the very title of her introduction to the catalogue of the exhibition: “Islamic or Not.” She argues against the reductive simplification implied in such kinds of categorisation.

Prominent in the MoMA show were eight works of Pakistani-born Shahzia Sikander, trained in Mughul miniature painting at the National College of Arts, Lahore. Influenced by Sigmar Polke, ‘layering paint and narrative’ in her miniatures has been Shahzia’s forte. The contemporary narrative of post 9/11 politics informs her composition ‘Web’: fighter planes caught in a spider’s web in some oil-rigged corner of the globe is juxtaposed with the traditional hunting motifs of a lion devouring a deer, and a leopard threatening the peace of a paradisiacal garden of flowering shrubs, gazelles and birds. This is quintessentially 21st century miniature painting.

Shahzia is one of a small group of artists, including Nilima Sheikh from India, who engage in developing an active relationship with the forms that refer to earlier visual traditions of the subcontinent. Yet, Shahzia’s treatment of traditional motifs in her miniatures is neither nostalgic nor revivalist.

Not in the way it was for the father of modern Pakistani art, Abdur Rahman Chughtai. Chughtai’s artistic heritage dated back to the Bengal School pioneered by Abanindranath Thakur, a nephew of Robindronath Thakur. Samarendranath Gupta, a student of Abanindranath, had brought the style from Kolkata to Lahore when he became the principal of the Mayo School of Art — now the NCA. Chughtai, a student at Mayo School, was initiated into the Bengal watercolor techniques; he mastered the method and integrated it into his distinctive style.

The year 1906 was the turning point: Chughtai rejected the Bengal School and turned to Mughul miniatures. Chughtai had visited the Bengal School in 1905 after the Partition of the state into East and West Bengal; he had witnessed the heightened divisiveness between the Hindu and Muslim communities of Bengal. In 1906 the Muslim League was founded to represent the political demands of Muslim Indians, and the poet Muhammad Iqbal proposed the creation of the separate Muslim state of Pakistan. Chughtai decided to commit himself to a revival of Mughal aesthetics. The issue became one of forging a Muslim identity in his works. He veered away from the Bengal School as India began to crack along communal lines, culminating in the 1947 Partition that split Punjab and Bengal, with Lahore falling within the nascent Muslim country, Pakistan and Kolkata in the predominantly Hindu India. 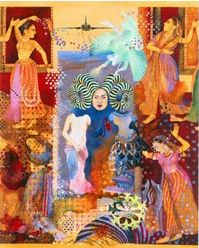 Ironically, the Bengal School of Art itself was a product of a crisis in identity: it was born at the turn of the 20th century primarily as a reaction to the British imperial imposition of Western values on Indian art. It nucleated at the Society of Oriental Art, and in Jorashanko, the residence of the talented Thakur family in Kolkata. As an indigenous solution to issues of identity and self-representation, the Bengal School sought to expose and displace the colonialist’s art and substitute its own mission of self-expression and national regeneration.

Abanindranath, who had received training in the European Academic style of painting from Olinto Gilhardi and Charles Palmer, sought to remain true to Indian traditions, experience and sensibility, while making use of European conventions. The principal aspiration of the Bengal School painters was to reinstate the numinous, mystical image at the heart of Indian art that had been under-valued under the British naturalist art education.

Abanindranath was inspired by Far-eastern art, specifically Japanese watercolours. The emotively nuanced ‘wash’ technique he evolved from observing Japanese artist Yokoyama Taikan became, in time, the chief trademark of the ‘Abanindranath style’ of Indian painting. Though he experimented in many forms, Abanindranath’s most obvious debt was to Mughal paintings. Under his brush the Mughal miniature-style paintings became highly emotive, capturing an intensity, exemplified in his famous study, ‘The Passing of Shah Jahan’.

Befriended by E. B. Havell, Superintendent of the Calcutta Art School, Abanindranath secured official patronage and furthered the nationalist cause by influencing the curricula of the government schools of art. The neo-Bengal art was a synthesis of Ajanta fresco, Mughal/Pahari/Rajput miniature, European naturalism, and Japanese wash techniques. By the 1920s, the Bengal School had established its ‘self-conscious role of a movement which restored to Indian art, its independence and lost identity.’

Despite the Bengal School’s success in forging a new ‘Indian’ art, the tension between the revivalist recovery of past Indian art traditions and the progressive openness to new developments in global art, soon splintered the Bengal School. Nandalal Bose adopted the Japanese minimalist style to depict the lives of ordinary villagers. Jamini Roy, a primitivist, infused new life into the dying tradition of patua folk art. While Gaganendronath Thakur went on to experiment with Cubism, Robindronath Thakur bent towards an inward-looking expressionism.

Post 9/11, identity politics has reared its hydra head, fomenting an ‘us’ versus ‘them’ cultural war. Culture can be defined as a system of human practices that constitute society; it involves interconnected spheres of activity- a web of social interactions encompassing economics, politics, morals, religion, art, and language. Our culture is our primary sense of identity defining who we are. Post-independence, many artists have travelled and trained outside the subcontinent, and some have emigrated to new lands. So our culture is increasingly acquiring a global character. Consequently, the discourse on contemporary South Asian art oscillates between multiple dichotomies, such as that of past and present, tradition and modernity, religious and secular, sub-urban and metropolitan. The South Asian artist is challenged to resolve these dichotomies, and to arrive at their own distinctive viewpoint.

As the Pakistani and Indian diaspora grows, and as more South Asian artists live and create art in their native locations and their residences abroad, these dichotomies often tend towards a syncretic solution. Artists begin to juxtapose diverse sources — often playfully — displaying a global sensibility. So much so that it is difficult to speak of a monolithic ‘Indian’ or ‘Pakistani’ art form. An increasingly popular trend is to create harmonious hybrids by bringing together signifiers from different cultures (Hindu, Muslim, Christian) and time periods, Eastern and Western, within the same artwork as exemplified in the modernist miniatures created by Shahzia Sikander. Works such as Shahzia’s, where images of varied origins are represented on the same canvas (for example when she uses a traditional Hindu image of the goddess Kali and superimposes it onto a veiled Muslim female form), provoke the destabilisation of fixed meanings. The foremost being that of fixed identity.

In addressing the fluidity of identity and embracing our heterogeneous heritage, South Asian art has come a long way from the nationalist, revivalist agendas of Abanindranath’s Bengal School or that of Chughtai in Lahore who searched for identity in pre-Colonial/pre-Partition cultural roots. It is in the works of artists like Shahzia, that one finds a rich transplant of traditions in a contemporary context. Artists like her are striding many worlds and breaking out of narrow, nationalist agendas; their works contemplate a global culture.

And herein lies hope for harmony.