Benazir Bhutto was not universally loved. Seen as a democratic champion of the downtrodden to some, she was a sly and corrupt opportunist to others. But everyone agrees on one thing: she had ambition and courage in spades. 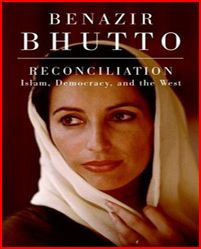 In Reconciliation: Islam, Democracy and the West, both of these personal characteristics shine through — right from the very beginning. Her opening chapter, describing her eventful return to Pakistan on October 18, 2007, oozes both ambition and courage in the story itself and how she presents it. Retelling her powerful second homecoming allows her to not only talk about her enduring popularity and bravery, it also provides Bhutto the opportunity to show the world that at the heart of Pakistan there is the desire and demand for democracy. Further, the story of a celebration-turned-battlefield in Pakistan, a country at the centre of global terror, allows Bhutto to segue into her thesis: despite appearances, Islam is not antithetical to democracy and pluralism, and as such the clash of civilisations can be avoided through the expansion of democracy in the Muslim world. In fact, the biggest clash, she claims, is taking place within Islam between moderates and fanatics. When that tension is resolved, the others will be too.

It is easy to see that the scope of her project is also both ambitious and courageous. Debunking myths about Islam, analysing 100 years of western political domination over Islamic nations and their effect on democracy, refuting the clash of civilisations theory and then offering a way out of the current geo-political morass is no easy task. Bhutto struggles in her attempt. Her book is often too academic, slow, frustrating, repetitive, disjointed and vindictive.

But she tries. And for that the world should be thankful. Because while Reconciliation is not gripping from cover to cover, its message is necessary. Bhutto has produced a thoughtful book for everyone, whether in the East or West, whether Muslim or non-Muslim, who wants to see an end to terrorism. She believes it can be accomplished and she points to a way out that doesn’t involve war. Hers is a constructive manifesto of hope.

Bhutto builds her argument in a very slow, methodical manner. Her book has strong scholarly tones and the research assembled is impressive. It is here where her friend and collaborator, Mark Siegel, proved to be invaluable. “She wanted me to compile all the assertions of extremist clerics and terrorists on democracy, pluralism, tolerance,” Siegel told the UK’s The Times. “Then she wanted me to confer with Islamic scholars and compile the Quranic references to the same subjects and line them out in an array, almost a spreadsheet, against the extremists.” Siegel’s contribution is evident when Bhutto asserts the true nature of Islam: a peaceful, tolerant, equitable religion that denounces killing and suicide and favours knowledge and reason. Dozens of quotes from Islamic scholars and passages from the Quran are amassed here, building on one another to form the foundation of Bhutto’s argument: the values of democracy and peace are inherent in Islam, and extremists who oppress and kill in the name of religion have hijacked and politicised Islam. Since 9/11, discussions on Islam and jihad have been ubiquitous. But in the din of constant suicide bombings and sectarian violence, the peaceful image of Islam has made little headway. So while Bhutto’s message is not new, it works here because it desperately needs repeating.

With the first building block of her thesis in place, Bhutto examines the inability of democracy to take hold in the Muslim world despite Islam’s innate democratic principles. She hops between Muslim countries, dissecting their modern political histories to show that while democratic governance may be lacking, it is only because democratic institutions have not been allowed to develop and become part of the essential fabric of society. The democratic ideals of citizens and the religion that guides them have been “crushed by colonial power or its proxy” over and over again, writes Bhutto. The point is clear and believable. But the chapter is a doozy. Seventy-five pages of truncated, case-by-case national histories do not make a page-turner. She could have made her point with five or six strong examples. Twenty-three is unnecessary.

At this point, Pakistan takes centre stage. And like Newsweek before her, Bhutto calls Pakistan the most dangerous place in the world. A detailed version of Pakistan’s history is served up to show the bumpy 60-year ride the country has had travelling between democracy and dictatorship. But her narrative is frustrating. Continuing a theme that rears its ugly head throughout the tome, Bhutto lets anger, posturing and self-promotion get in the way of an honest account of the truth. Zia-ul-Haq, Nawaz Sharif and President Pervez Musharraf form an evil troika in her version of history. While Bhutto’s constant digs (that smack of festering hatred) at General Zia are understandable, they are disappointing. They don’t add credibility to her arguments, and like her repeated exaggerations that three million people showed up to greet her in Karachi last year (most estimates were under 500,000) and her attempt to diminish the economic growth of the past six years under President Musharraf, they only detract. Unsurprisingly, in her narrative, her father, Zulfikar Ali Bhutto, and she make up the forces of good. Her father’s record in office is painted as flawless and so is hers. Even her grandfather, Sir Shah Nawaz Bhutto, is promoted to near-divine status and given a place of importance next to Mohammad Ali Jinnah in the independence of Pakistan. Extremism was controlled under her watch, claims Bhutto, even though she was prime minister from 1993 to 1996 when the Taliban rose to power. Even last year’s power-sharing deal with Musharraf, which resulted in the National Reconciliation Ordinance, is dismissed by Bhutto as nothing underhanded, nothing undemocratic. Her point to her Pakistan chapter? This is how Pakistan became so messed up, but it is not the Bhutto family’s fault.

Still, these failures only detract from her book, they do not negate the positive power within it. For when Bhutto gets past laying the foundation for her treatise and starts unravelling the theory that a clash of civilisations is inevitable, it is not just intellectually sound, but enthralling and inspiring. The sad part is that it has taken 232 pages to get here. By bringing together the ideas of many international thinkers, she shows that while civilisational ties remain between countries, self-interest remains the primary force that drives nations. In fact, the clash theory is a dangerous self-fulfilling prophecy. “The more we believe it and make it a basis for action, the more likely it is to come true.”

This is an important conclusion, for it provides clarity and gives hope. It says that the problems behind Islamic extremism are big, but they need not be catastrophic. They are, like most conflicts around the world, caused by internal, factional tensions. And these can be solved.

She refers to Islamic scholars who unanimously agree that much work needs to be done by Muslims themselves, including looking beyond tradition and reviving ijtihad (independent judgment or reason) and tolerance in a constantly evolving world. Bhutto goes on to discuss how to develop democracy in the Muslim world. Her suggestions are logical (promote equality, strengthen civil society groups) but not so easy (build a middle class and offer good education for all). But it is her suggestion of creating a Muslim Investment Fund with contributions from oil-producing Muslim countries and a Marshall Plan-type programme, funded by key powerhouse nations, to help economically reconstruct and develop many poor Muslim nations that is both creative and controversial — and somewhat naÃ¯ve: her vision of a democratic, tolerant and pluralistic Islam is not necessarily shared by oil-rich regimes like Saudi Arabia. And with finite and dwindling oil reserves, giving more money away is probably not high on their agenda. Nonetheless, Bhutto allocates 40-solid pages to solutions. This is not a book of empty rhetoric.

It is unclear how much of Reconciliation Benazir Bhutto actually wrote herself. But in the end, it doesn’t really matter. In fact, it wouldn’t even matter if the message were not entirely hers — because she believed in it. And at this point in Pakistan’s and the world’s history, she is the perfect spokeswoman for it.

But who will truly pick up her mantle to see this message through? Who has her ambition and courage to do that?