What are your views on the Partition of the subcontinent?

Partition is a fact, often a painful fact. It is one of those events of history that cannot be undone, and nobody should have the idiocy to attempt to undo it. It did cause great upheaval and great pain but it also gave many people a sense of pride and achievement, at least for some time.

Now, we should try to understand why and how it happened, and spend less energy on debating whether it should or should not have happened.

What role can people-to-people contact play in breaking down barriers between India and Pakistan?

A great role. There is no doubt that when the people of Pakistan and India meet each other, there is immediate warmth and understanding; a wish to do things together. There are so many common experiences and common roots.

But there is this system of making it difficult for people to make contact with each other, so there needs to be a popular movement on both sides to remove these obstacles.

Do you think that religion was the dividing force during Partition?

The way religion was used was, of course, the dividing force. There was this ideological clash between those who believed in purity of birth and those who believed in purity of belief. This could have been a very divisive thing indeed, but the people of the Punjab — now I’m speaking only about the Punjab — had the common sense to put this conflict to one side and continue to live normal lives. This is how people lived in the towns and villages of the Punjab, in both the Muslim majority and in the Hindu and Sikh majority areas. I’m not saying that the Punjabis became one nation or one people, that would be incorrect, but there was an amazing pragmatism to their common life.

Then people tried to stoke fears, although not so much in a religious sense, by saying to people of a certain group, that they will not be safe if another group rules over them. So, the insecurity of a minority group was exploited in some cases. 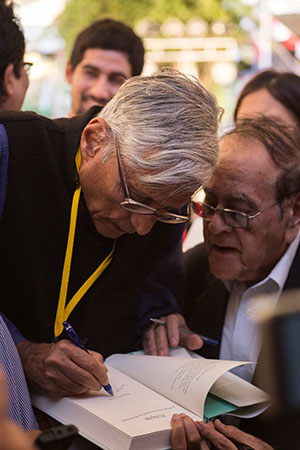 In the Punjab, even though the Muslims made up the majority, the Hindus and Sikhs were better off economically and were more willing to take advantage of British-style education. Therefore, in the earlier part of the 20th century, the bureaucracy at senior levels was white but junior levels were filled by Hindus, and not by the majority Muslim population. Students in medical and engineering colleges were also from the minority. So when some leaders tried to use a quota system to make space for the minorities, it was very strongly resisted. Not because the system was anti-Muslim, but because it was felt that the minorities had filled these positions by dint of work and ability, so why should the government make more room for the majority? This was a short-sighted reaction. Would one call this a religious issue? I don’t think so.

Peace between India and Pakistan: is it just an ideal or can it really be achieved?

It’s not only an ideal; it really is common sense in policy. There are millions of people in both countries who are poor, have poor health and whose education standards are very low. Continuing to spend vast sums on bombs and armies, doesn’t seem to be particularly rational. But there do seem to be political gains for hawkish policies in both countries. Therefore, people either push those policies or become scared to give them up.

But the time has come for leaders on both sides to take some risks. They may find that the public supports policies that are pro-peace.

Even if the majority does support these policies, there is a minority that has a certain nuisance value.

Yes, they are able to grab the mike, and other media instruments, to exercise an influence that is way beyond their numbers. If others become aware of this, they can become more confident in pursuing a pro-peace agenda.

What about collaboration in literature and the arts? Are people in India aware of the literary scene in Pakistan?

Only a limited circle is aware. Some people know about the crop of new writers from Pakistan — not just in per capita terms or as a proportion of the population — but even in absolute terms, there is greater vigour and quality in Pakistani writing today, maybe more than in India. When I return, I will speak of this incredible interest that Pakistanis have in literature and the pride they have in their successful authors.

What are your impressions of the Karachi Literary Festival?

There is such a fine, wholehearted spirit among the participants, and they are so fully involved. I’m also impressed by the efficiency with which the Festival is being conducted; all the sessions I have attended started and finished on time and the programme is user-friendly.

I have attended a few festivals in India, but I don’t know if I’ve been to any which have made an impact as strong and positive as this one.

This interview was originally published in Newsline’s March 2014 issue