“We stayed up till 2 am setting everything up,” said Riffat Alvi, art director at the VM Art Gallery, commenting on the sheer mass of work that arrived for the 12th Annual Emerging Talent Exhibition. Every inch of space in the gallery was taken up this month by paintings, sculptures and installations — the works of final year students from 18 art schools across Pakistan. While these rookies may have lacked the maturity of the more experienced artists, they brought a fresh perspective to the table that was exhilarating. Still finding their unique voices, the artists fused together various media, creative ideas, technology and technique to create a multidimensional and interactive experience.

The high point of the day was the element of surprise. Light, shadow, reflection, and the viewers’ own movements were used to fully engage the mind. Arsalan Nasir, for example, immersed the viewer in a sense of nostalgia by using LEDs set up opposite each other. As the viewer approached the exhibit, an empty living room was visible on both screens, but once he crossed the imaginary threshold, they flashed to life with images of three smiling children posing to the left and a mother with a camera photographing them to the right. The act of trespassing on this space then triggered a wave of memories. Maria Khan’s untitled work was also similarly clever and rueful. Seen from the side, only an old lady was visible but viewed from the front, the canvas showed her husband in faded colours, a trace that still remained from a time that had passed. This hologram technique had been created manually, using angles, paint and embroidery. 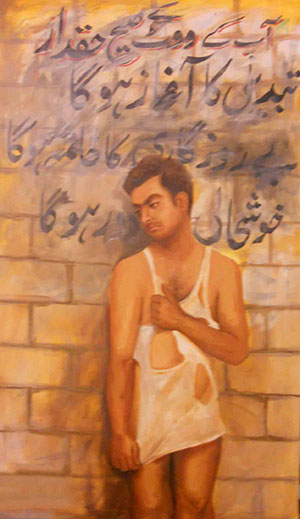 Nasir Ansari’s work was equally impressive: cubes assembled out of many layers of plexiglass, through which holes had been cut to create an image which looked different from each side, i.e. showed all six sides of a particular scene. In one, boys with school bags walked along, and one could see the movement and the emergence of two silhouettes on the other side, stronger and darker like the shapes of men. This glass cube, hence, became representative of the passage of time. 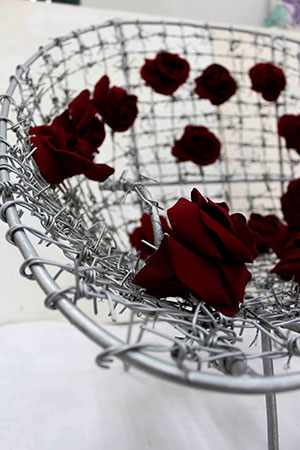 Politics, as always, was a ubiquitous theme. Marium Saleem’s ‘Political Chair’ immediately grabbed one’s attention upon entering the gallery. The rose-bedecked chair invited the viewer to come, sit, and make oneself comfortable. However, if they were foolish enough to do so, it stabbed them in the back, as it was actually made of barbed wire. The metaphor here was pretty obvious — but it was an interesting way to portray the issue of political rhetoric versus reality. Saira Iftikhar’s ‘Terrorism’ was another moving political piece. It showed a suicide vest carefully draped on a chair. To me, this portrayed the human side of a tragedy that affects us all. One can imagine a young suicide bomber, preparing for the most important day of his life the night before by laying out his equipment neatly, much as a girl would lay out a dress for a special occasion. The innocence of the action and the contrast of sinister intent and devastating consequence made the piece special.

But most striking was ‘Wall Chalking,’ two separate paintings by Zohaib Rind showing naked men, one clutching forlornly at a tattered vest to cover himself and the other bound up in red tape, both standing against walls bearing slogans of progress, change and an end to corruption. On one level, these images bare the ugly truth of political lies, but there was also a subtext of homoeroticism, suggesting that society’s hypocrisy and its denial of the rights of the “different” are issues that need to be addressed.

Personally interesting to me were the two works titled ‘Mughals’ by Sajjad Khilji of CEAD, in which we see Mughal princes in modern gear, shooting down aircraft and riddling villains with bullets, a la Indiana Jones. This was an interesting reappropriation of historical symbols. The imagery at once glamourised the past in contemporary terms, making the Mughals modern-day vigilante heroes — a fantastical scene that could have been straight out of a Bollywood movie. 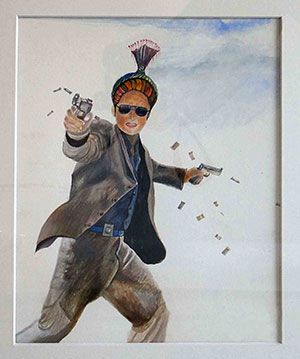 In fact, the Mughals were quite a dominant theme at the show. This was the first year miniatures were so widely included in numerous art programmes and many artists gave a modern spin to this ancient art form. The standout for me was Hunerkada’s Fatima Buksh, whose miniatures were mounted on pages kindergarteners use to learn the Urdu alphabet.

The pieces described here are just the tip of a very subjective iceberg — there is a tremendous amount of work on display at the gallery, in numerous styles and on numerous themes, including religion, relationships, women, poverty, childhood, beauty, and subversion. If there’s one take-away from all this, it is that there is a lot of potential in the new entrants on the scene. The art world is very much a living breathing thing, evolving every minute. Art lovers looking for something new to pique their interest should head over to VM.

This review was originally published in Newsline’s March 2014 issue.