With all the hype and over-the-top praise surrounding J.J. Abrams’ reboot of the Star Trek…

Fear of the Unknown

On May 14, Proctor and Gamble Pakistan launched its first Social Commitment Report amidst friends,…

In this day and age of bad eating habits, and with the rising cost of…

Jumping on the Bandwagon

Fashion photographer Munna Mushtaq launched Dulhan, a bridal magazine, on May 18, on the fourth floor…

Bed, Bath and Beyond

Nishat Linen announced the opening of their new outlet on Tariq Road with a flourish,…

It is unwise to put deadlines on military campaigns against hardened hoodlums, especially if they…

Such is the desperation of the people displaced by the military operation in the NWFP,…

“If this is Pakistan’s war, then why is only a part of Pakistan bearing the…

Some government officials still continue to live in a state of denial. Take the Punjab law…

Trying my best to avoid puddles and animal faeces, I struggle to keep up with…

Driving towards Saddar and the neighbouring areas of Karachi takes you back in time, to…

Ever since she was a little girl, Sharmeen Obaid Chinoy knew that she had something…

A Province in Peril

As the insurgency in Balochistan gains momentum, the Baloch raise one question repeatedly: “What has…

A Vote for Stability

India may be a haven of calm in a rambunctious neighbourhood, but it is the…

Has the Rubicon Been Crossed?

If there is one thing common between the military dispensation and the present civilian democracy,…

“We want freedom. We are not willing to let Balochistan continue as a colony of…

Couture for a Cause

Of Oranges, Lemons and Magic Shoes

Diverging from the abstract struggles and idiosyncrasies that artists feel compelled to explore, two recent…

Where the Streets Have No Name

Maniza Naqvi was sent by the World Bank to Sarajevo, four years after the siege…

Advice to an Empire

“Right from my first novel, I explored how politics impinges on and disrupts the ordinary…

A gripping film from the onset, with clever dialogue and excellent characterisation, Gulaal takes you…

Chronicles from a Wasteland

Afghanistan has historically been a tortured land. Even before the Cold War, the hardy and…

While dealing with the issue of expeditious disposal of cases, the committee divided its recommendations…

The separatist movement in Balochistan has gained momentum, and relations between the province and the…

“We want to appeal to all generations, all classes and all nations” — Taimur Rahman,…

From the Rooftops Shouting Out

Artistic craft manifests itself in myriad forms. This group of photographs focuses on immovable creations…

The Medium of the Moment

Recently, Karachi audiences received a taste of the latest offering in the new media arts…

They’re holding hands. A double take confirms it. And they are not two men holding…

Not From the Heart

A considerable amount of art these days carries an agenda of issue-based concerns, but Koel…

In this day and age of cutting costs and generally skimping on everything, such that…

Trying my best to avoid puddles and animal faeces, I struggle to keep up with Veronique Ahmed, who was born and brought up in eastern France, but knows her way around the animal section of the Empress Market like a pro. Dressed in shalwar kameez and a pair of sandals, with her hair firmly pushed back into a ponytail — save for her short bangs which she unconsciously tries to push away from her forehead — Veronique could easily blend into the crowd. Except for the strong French accent and her blonde hair. She hates shopping for clothes, adding that most of her clothes are gifts. “I just cannot stand the trips to the tailor and buying cloth … it’s too tedious and an absolute waste of time.”

Veronique is intrigued by the baby mongoose and stops for a quick minute to have a look at them. “I only buy those animals that aren’t being taken care of properly or are sick, and I know will die living in these conditions,” she tells me, as she peers into the dark cage.

“Look, baby mongoose — it’s very beautiful,” the vendor says in an attempt to convince her. The baby looks frightened and struggles to escape. Someone is smoking a cigarette loaded with hash and a strong pungent smell wafts through the air. I spot the cigarette between the teeth of the mongoose-seller, who then takes a long drag and blows some smoke into the baby’s face. It calms down almost immediately. But not before Veronique realises what he’s doing: “Aisa mat karo isko,” and takes the palm-sized baby into her hands. Her expression changes and I can tell she wants to buy the young mongoose. “Unfortunately, I don’t have the space to keep him,” she tells me, handing it back to the vendor. He yells after us, trying to sell it to us as we resume our trek.

The sheer number and variety of animals available at Empress Market is overwhelming, not to mention the stench of all the animals and the garbage dump right by the market, but not for Veronique. She frequents the market almost every other week, looking for animals to rescue and to buy grains and seeds for her other family, as she calls them — the 50-plus animals she keeps in her front and backyard. Most of these animals were rescued because they were either sick, dying, injured or kept in the worst possible conditions. Her family includes pelicans, flamingos, a vulture, porcupines, a kite, hedgehogs, foxes, turtles, cats, dogs and tortoises, to name a few. There are very few animals, mostly the birds and the rabbits, which do not have a name. Otherwise, almost all the dogs and cats have names and sometimes, even a purpose. Meet Pepsi, a beautiful black pug who truly believes he knows his way around the yard better than the other dogs, and maybe even the owners, and as the tour guide, insists on walking with you as you visit each cage. And then there’s Kelly, an excitable cocker spaniel who constantly craves attention, follows you around, jumping, wagging her tail, licking your toes, stepping on your feet and she’ll even bring you a ball so you can play fetch with her. There’s also Pheonix, the kite that stares at you from an uncomfortably close distance. 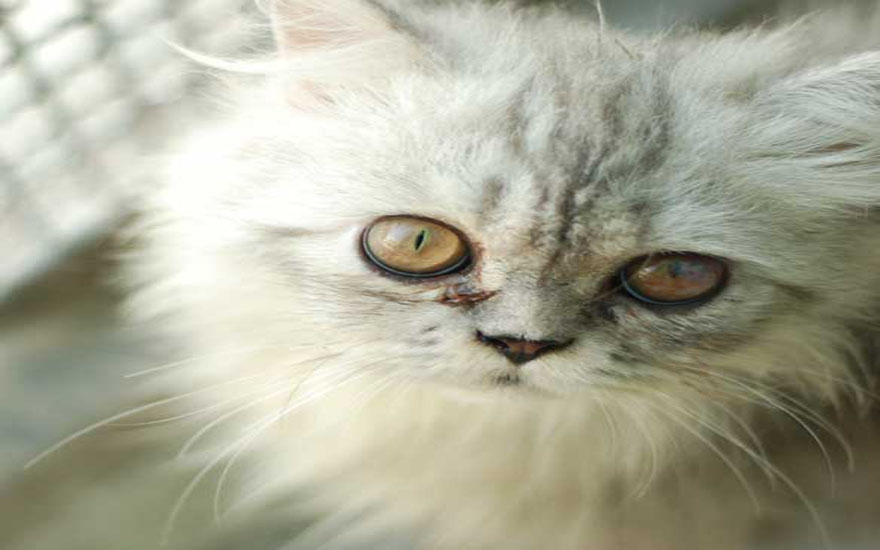 “Oh don’t mind him. He’s practically harmless. In fact, since he grew up around dogs, he thinks he is one. He’s always with the dogs, chewing on their toys, eating their food,” says Mashal, Veronique’s 17-year-old son. He claims that Deigo, the vulture sitting on the wall, is also harmless. “They’re scavengers so we’re safe,” he adds matter-of-factly. Harmless, but creepy as hell.

Walking around with Veronique in Empress Market, I realise that many of the shopkeepers either know her or recognise her. Most of them help her out when she negotiates prices with some of the vendors. “Most of the time these people are very helpful and don’t charge much for such animals. But this one time, I saw a beautiful cat being kept in a tiny little cage and it was very sick. I tried to buy it from the vendor but he refused to sell it to me for less than Rs 7,000, which is a lot more than the asking price. I tried to negotiate the price with him. I even had other vendors talk to him, to try and buy the kitten for less than Rs 7,000. I did this for six months, almost every week. The cat finally died,” she tells me, dejectedly.