The mighty can be vulnerable — more vulnerable than they think or are willing to admit. That is the message that the Pakistan Muslim League’s partner in power in Sindh, the Muttahida Qaumi Movement, has sent across very effectively to Islamabad.

Naturally, the hyped-up drama involving the MQM ministers’ decision to tender their resignations to President General Pervez Musharraf was the media’s staple diet, along with the rains that lashed the country.

However, as reporters ran from pillar to post to cover President Musharraf’s personal intervention and Prime Minister Shaukat Aziz’s visit, followed by a string of meetings held at the Governor’s House, to save the fragile provincial set-up from collapsing — followed by yet another bout of problems and another set of meetings, this time in Islamabad — the bigger, and more nuanced news almost escaped notice.

The MQM’s move proved that the seemingly invincible power structure, led by a uniformed general, is clearly prone to arm-twisting and open to implementing disagreeable options. While Sindh’s peace-brokers are now patting themselves on the back for tiding over this “small hiccup,” as one of them put it, retaining the MQM’s goodwill has not been an easy decision.

President Pervez Musharraf’s first reaction to the news of the MQM’s resignations was that of disbelief, expressed in a couple of sentences which if recorded would have made matters worse.

The resignations were tendered amidst much publicity and were timed to coincide with the President’s departure from Karachi, where he had spent three days. An impression was thus created as if Musharraf had left the province in political turmoil instead of pruning the numerous loose ends. But then his advisors prevailed, as they always do, and Musharraf put his best reconciliatory foot forward, initiating immediate contact with the MQM leadership. This was reciprocated by the MQM, which reiterated its “full confidence in the President’s leadership.”

Yet, beneath the surface of the new calm in Sindh, a sea of tension and distrust continues to rage. The province’s chief minister, Arbab Ghulam Rahim, is a man whose fate is uncertain and who has been much whittled down to size. Rahim is also upset because, on the one hand, the President during his visit to Karachi, reposed full confidence in his leadership and, on the other, and almost in the same stride, his nemesis, the MQM, seem to have received the assurance that the Muslim League is willing to drop Rahim to save their government. 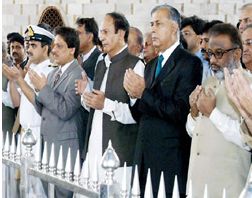 Arbab Ghulam Rahim’s anger may not matter. He is of little value, if at all, and does not count in the final calculation of saving the party alliance with the MQM. But, by cutting him down to size, or even by easing him out of power, the Pakistan Muslim League will lose an important manipulator of Sindh’s rural constituencies, the stronghold of the Pakistan People’s Party.

The move also weakens the office of the chief minister. A tamed Arbab Rahim, or a suitable replacement, speaks of the ascendancy of the MQM and their clout with General Pervez Musharraf. In fact, a newcomer to the seat of the chief minister will be particularly aware of the need to keep his allies in good humour, given the MQM’s latest show of strength. As it is the MQM is having a field day. It is effectively running the province and has complete hold over all administrative matters. The MQM’s tightening political hold over the province has not happened by default. The MQM has played a smart game with the political hand it was dealt out. The party is aware that the President’s aversion to a larger deal with the Pakistan People’s Party does not leave him with many options in the province. They have made the most of the situation and have not just expanded, but have flagrantly used their bargaining position. 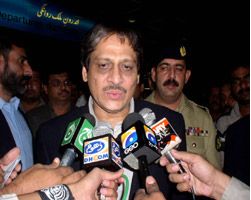 This situation may serve the MQM’s purpose, but it puts the ruling party in a tight corner and nullifies the chances of developing any understanding with the troublesome opposition parties in the upcoming elections. One of the grimmest grievances that the combined religious parties, under the banner of the MMA, have against the federal government relates to its handling of the situation in Karachi. There can be no understanding between the Pakistan Muslim League and the MMA if the religious parties’ deep-seated complaints against the MQM are not addressed. Similarly, for any headway to be made with the Peoples Party, power-sharing in Sindh is critical. Sindh is to the PPP what NWFP is to the MMA. But even there, the MQM holds all the cards. Even if General Musharraf reluctantly agrees to allow any breathing space to the Peoples Party in Sindh, the MQM will be crucial as a check on the party, either as part of government or as part of the opposition.

An additional political value of the MQM is centred around its deep penetration in, and hold of, the local bodies institutions. In urban centres it rules supreme and, even if ejected from power, will be a critical factor in provincial politics.

It is clear that the recent turmoil in the province has worked to the total advantage of the MQM. And, while the government puts up a brave, happy face, the crisis has exposed the dead-end street Sindh has become.