In a world where cricket’s administration and power-politics are witnessing a bewildering array of changes, the Pakistan Cricket Board (PCB) is engulfed in a disastrous tail-spin, whose details are so comical that it is time to start suspecting whether all of this isn’t, in fact, an elaborate surrealist art project. Surely this can’t really be happening.

The battle began on May 28 last year, when Zaka Ashraf was removed by the Islamabad High Court (IHC) following a dispute over his election. On June 23, with important decisions at the board still pending, Najam Sethi was named interim chairman. Less than a month later, the IHC dismissed him on July 20. On October 15, the board’s patron and Prime Minister of Pakistan, Nawaz Sharif, dissolved the PCB’s remaining governing structure and reinstated Sethi. Then, in November, the IHC said that Sethi could continue working but in January, the court restored Ashraf and dismissed Sethi. In February, Nawaz repeated his October trick and less than a month after he came in, Ashraf was replaced by Sethi. On May 17, the IHC reinstated Ashraf but the Supreme Court stayed the order, thus restoring Sethi.

If you’ve lost count, Najam Sethi has held the top job four times, while Ashraf has held it thrice. Moreover, the IHC, which set the ball rolling by dismissing Ashraf, has been responsible for bringing him back, twice.

So exactly what is going on?

Once the overall gracelessness of the whole affair dissipates, we begin to see an almighty political battle, and one that is being fought along several levels and institutions of modern Pakistan. The IHC, which started this whole thing, is an example of a newly empowered judiciary flexing its muscles. Pakistan’s judiciary had spent a long time being pliant to the other arms of the state, and it is now eager to carve out its own space in the political calculus of the country. Its eagerness to take on the executive explains why it initially sacked Ashraf (who was a PPP appointee) and then later backed him over Sethi, who was appointed by the prime minister.

On another level, this is also a battle between the various patronage networks within the PCB itself. The two chairmen have both been blessed by various ‘camps’ within the institution, and these are mostly culminations of pre-existing regional and local rivalries and politics that have become personalised, with Ashraf recently threatening to sue Sethi after an audit by his administration claimed massive embezzlement in the Ashraf era. 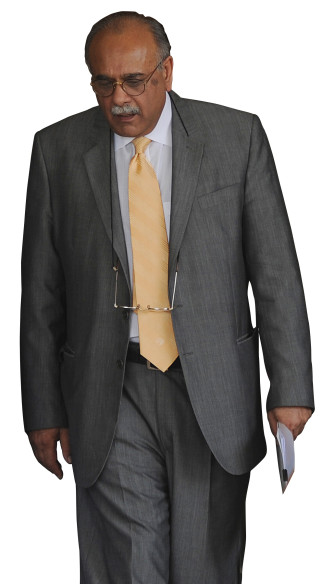 Finally, the media is not far behind, with persistent rumours that Sethi’s appointment was sought to guarantee that the team’s broadcast rights would be won by Geo Super, the sports channel owned by his other employers, Geo TV. With broadcasting rights basically the only revenue source for the PCB in the absence of international cricket, these battles are also significant.

Once we view this struggle within these lenses, we can start to identify why the whole process has taken such a damaging route. The PCB is, in a sense, caught up in a much bigger political battle, and yet the only reason it is in this situation is because it is something big and powerful enough in Pakistan to be worth fighting over. Pakistan’s various institutions — the traditional powerhouses of the military and the executive, as well as the more recently empowered judiciary and media — are all marking out their turf across many fields. We are increasingly seeing these battles become more and more vicious, whether in the Jang versus ISI debacle, or the Supreme Court’s dismissal of the Prime Minister in 2012. The game of musical chairs being played out for PCB chief’s post is just another example of this.

And what’s stranger still is that in a macabre way, all the changes that are taking place, beyond causing embarrassment, are having little impact on Pakistan’s place in world cricket. The changes brought about in the ICC by the notorious “Position Paper” has cemented the primacy of the “Big Three” — England, Australia and particularly India — in running the game and keeping its earnings. The motivation for these changes is brazenly commercial, and underlines that control should be equated to the revenue generated by each team.

The 2009 terrorist attack on the Sri Lankan team in Lahore and the subsequent end of international cricket has meant that, despite being a large country with a successful team, Pakistan has very little revenue potential. There are no international tours, it can’t host hugely lucrative ICC tours and it can’t attract global stars to its domestic league at a time when just about every country is doing so. It also means that the PCB finds it harder to find broadcasters to offer good deals, and to attract worthy sponsorship. Since tickets, broadcast rights, sponsorships and licencing (virtually non-existent in Pakistan) are the only ways for sports bodies to make money, it is clearly visible that the lack of international cricket has meant that the PCB’s financial clout is meaningless.

However, where all these changes in the PCB’s top seat do matter is in the long-term potential of the board. Pakistan might be irrelevant on the world stage for now, but if work is done to maximise the revenue opportunities available at present, that can begin to change. The PCB has had a poor record of negotiating TV deals, has failed to build on the popularity of domestic T20 tournaments and has shown little of the marketing skills and nous displayed by other boards. If it is to change all this it needs institutional stability, and that does not look like its forthcoming.

Ultimately, the majority of fans will only truly begin to care about the PCB’s internal affairs if either international cricket is returned to the country or if the team stops doing well. The former could guarantee unmitigated support for whoever ensures it, while the latter would cause immediate unpopularity.

As for the team itself, most sporting sides would suffer in the face of such dysfunction, but with Pakistan, it can often end up being inspiring. However, such short-term gains (a few wins for the team here and there), will not be able to redeem the longer damage that is being caused by this merry-go-round at the top. Cricket is on the cusp of great changes, and the petty battle bedevilling the PCB could mean that Pakistan and its cricketers will soon be left behind.

Ahmer Naqvi is a freelance writer and director of content at Patari, Pakistanâ€™s largest music portal.