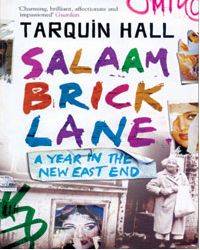 Salaam Brick Lane is a memoir with many flaws. Tarquin Hall, the author and narrator, is an Englishman who returns home after a 10-year absence, and occupies a place in Brick Lane. His inability to afford housing in the leafy London suburbs of his youth is described as a problem of universal proportions. In an attempt at humour, Hall unwittingly reduces his characters to caricatures of immigrants in popular culture, reminiscent of the characters in Mind Your Language. However, in spite of these shortcomings, he accomplishes something that few Indian, or British-Indian and American-Indian authors, accomplish when writing about the immigrant experience, or the Indian subcontinent diaspora.

Hall steers clear of the exoticisms that are rampant in books by, or about, South Asians. He is not awe-struck by the smell of frying brinjals and the orange paisleys of a woman’s sari, the curlicues of the Bengali script are not reduced to pictorial emblems that encapsulate the complexities of an entire culture. Hall is no Orientalist. He is not given to bouts of unexplainable sentimentality when he describes his Albanian, Indian, Iraqi, Afghani and Sikh neighbours on Brick Lane and despite his unnecessary emphasis on accents as opposed to dialects, Hall’s wry and unsentimental treatment of his characters is the meat on what would have otherwise been an indelible bone of a book.

Tarquin Hall begins life in the East End, on Brick Lane, with trepidation. He describes feeling like an outsider in the rowdy, over-crowded and crime-riddled Bengali expatriate community. For him, Brick Lane “was still coloured by childhood images of fog-bound streets stalked by Jack the Ripper, Bill Sykes, and the notorious Kray twins, who drove black sedans and buried their victims in the foundations of motorways. At home and at school, (he) had been taught that the people of the East End were different.” Hall finds, to his dismay and astonishment, that Jack London’s description of the East End, in his 1902 memoir, The People of the Abyss, reads like an accurate description of the present-day squalor and misery of Brick Lane: “a segregated city, with the rich, affluent and powerful living in the west, and the poor confined to the east.”

Hall is well aware of the irony of life on Brick Lane. When he hears white residents of the East End reminisce about their childhood and its “music halls and knee-ups, about playing Knock Down Ginger in the streets and eating jellied eels in pie and mash shops.” He finds that their bouts of nostalgia make “the old East End sound more like the set of a musical than your average city neighbourhood.” Certain parts of the East End have become hip and fashionable, and the tenants who are bohemians and artists, as opposed to sweat shop workers and Bangladeshi heroin addicts, are willing to pay high rental prices; the absurdity in this is not lost on Hall, but his treatment of such issues is not one-sided.

Slowly, Hall’s attention shifts away from his own discomfort and sense of isolation, and he begins to notice the world around him with a mercilessly razor-sharp eye for detail. He forges unlikely friendships in peculiar places: Sadie Cohen, an 80-year-old Jewish woman who remembers Brick Lane when it was a Jewish ghetto, before it became Banglatown. One of Sadie’s friends takes Hall to an East End building that was originally built as a church by Huguenot silk weavers in 1743, was later transformed into a synagogue, and then finally became a mosque. The original inscription on the sundial reads Umbra Sumus (“We are Shadows”). For Hall, such discoveries reveal what Brick Lane truly represents, in its historicalassimilation of immigrants, and its cycles of metamorphoses over the decades.

Toward the end of the memoir, Hall admits that he had “made pretty heavy weather of a re-entry (into London) that had been by many immigrants’ standards a cushy ride. Did that make me spoilt, I wondered. Or privileged? No doubt a bit of both.” Hall’s epiphany about his previous short-sightedness comes as no surprise. However, his difficulty in seeing white Cockney Brits as only ‘British,’ and Bangladeshi men who live wholly as ‘immigrants’ is gratifying, and surprising, and examines the assertion often made by native and foreigner alike: “we have our ways and they have theirs.”

Brick Lane is the absolute blurring of all lines: a microcosm of a world where east is west, and it is hard to tell who is really from here, and who is from elsewhere. It is through his vivid account, told with wisdom and unbiased compassion, that Hall transforms a lane of anonymous faces into a world peopled by stories.