“The empirical, eternally doomed to its reductive logic and corporeal dimensions, disseminates its rhetoric and tests its limits, malleability, substance, reducing reality to hybrid discourses that accentuate otherness, produce difference, ideological diasporas, and psychoanalytical readings emerging from the lower regions of the psyche that examine man merely through reason. Language, syntax, encoding are in the ultimate analysis organic, external constructions that cave in before a reality that is more than its innumerable definitions.”
Sumaya Durrani
(Ibn-e-Maryam) 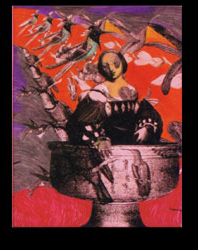 The current epoch confronts us like a double-edged sword — on the one hand, our materially oriented thinking has led us to seal our own doom; with the threat of nuclear war looming large, an alarming decline in our natural resources and our ever growing material needs, the gap between our inner and outer selves continues to widen, bringing us closer and closer to the brink of destruction. Conversely, recent compelling discoveries, such as the theory of relativity, chaos and quantum mechanics, that clearly link matter with the psyche, can liberate us from this mechanistic mindset (which is the root cause of our paranoia and anxiety) by giving individuals back their creative power.

However, while the doorway to salvation seems to be an arm’s length away, it will be a while before we can free ourselves from the grip of Cartesian duality. This rift between consciousness and the unconscious, matter and spirit first made its appearance during the Renaissance, when the triumphs of logical thought and the laws of mechanics and causality overshadowed irrational, intuitive and mystical impulses. This division between the intellect and spirituality was heightened by the rigid stance of the Catholic Church, which retained its former position despite the radical changes in the areas of science, art and philosophy.

Given our present context, it is interesting that Karachi-based painter and print-maker, Sumaya Durrani, has used the Renaissance as a point of reference in her recent body of prints, exhibited at the Chawkandi Gallery, Karachi, earlier this month. Titled, “Ibn-e-Maryam,” Sumaya created variations of two offset prints with images appropriated from Renaissance paintings, addressing the body/soul dichotomy, which, according to Sumaya, present “an alternative artistic paradigm amidst conditions of modernity to formulate an alternative poetics for creative expression from which to approach the ineffable, the non-rational and the sacred, determined within an esoteric order.” Hand-coloured, layered under and over with graphite and set in different frames to convey multiple frames of reference and relative perspectives, both images, highlighting the Virgin Mary, attempt to reconcile the temporal world of the ego and forms with the timeless and ethereal world of being.

The first portfolio of images highlights the struggle to attain spiritual enlightenment, what has also been commonly referred to as the path of the heart by certain sufis and mystics. The Virgin Mary, standing in a Safavid bowl that floats in an uncharted realm, is surrounded by birds and flowers. This journey, though seemingly blissful, with its fleeting glimpses and visions of perfection, is a precarious one and there is the danger of losing oneself in the process. The chalice, which could also be the legendary cup of Christ that endows everlasting life, in this case symbolises the heart; the woman inside the chalice extends her right hand outwards to ask for something that is already contained within her.

Unlike the first set of images, which are somewhat unsettling, and portray Virgin Mary struggling with illusions and trying to overcome earthly forces, we witness her rebirth and transformation in the second portfolio, with the cosmos pouring out the gifts of her struggle with profusion. Holding the infant Christ, with a butterfly caressing her cheek, she is the centre of all creation.

It is pertinent to ask why Sumaya resorted to the language of recognisable forms and symbols to convey the abstract and the formless. However, the physical realm holds the key to the unconscious, and only in their interplay can the unmanifested prove its value. The symbol, which is an object of the known world, acts as a bridge, whereas in abstract paintings the known world vanishes completely.

At this point it is important for artists to integrate opposites, to reunite their inward reality with the world of forms. To conclude with the words of French critic and painter, Jean Bazaine, “It is a great temptation for the painter to paint the pure rhythm of his feeling, the most secret pulse of his heart, instead of embodying it in a concrete form. That, however, leads only to a desiccated mathematics or a kind of abstract expressionism, which ends in monotony and a progressive impoverishment of form… But a form that can reconcile man with his word is an ‘art of communion’ by which man, can recognise his unformed countenance in the world.” .