The temperature plummeted sharply as the steady drizzle turned into a thunderstorm. Mohammed Hayat, wrapped in a thin blanket, looked anxiously towards the mountains . “It will soon be snowing there, “he muttered.

Hayat, a poor farmer, had walked almost 20 miles on a perilous mountain path to Gandool , to get food and a tent for his family stranded in a village 7500 feet up in the mountains in Kaghan. The village is one of hundreds still waiting for relief.

Hayat makes this torturous journey every second day to receive food supplies from aid agencies, because he is not given enough food rations to feed his family for a longer period. His greatest need however is a tent. His wife and two surviving children have been sleeping in the ruins of his destroyed house where his two young sons were killed. He was told to come back later.

“My surviving children are sick and I don’t know whether they will survive for long in this cold weather without shelter,” said a visibly dejected Hayat as he started his long trek back home. With his dishevelled beard and his face lined with sorrow and misery, he looked much older than his 30 odd years.

Once a beautiful district in the middle of a pine forest on the way to Kaghan, Gandool can now only be reached through a treacherous rocky path. After the earthquake’s devastation, it wears the look of desolation and death. A part of the mountain has turned brown due to massive landslides. Hundreds of bodies are still buried under the debris of fallen houses three weeks after the quake. “There is no one to dig them out,” said Ashiq Hussain, a local taxi driver who lost one child and many close relations in the quake.

The situation in Balakot town, a few miles down the road, is even worse. While a large part of the population was killed by the quake, the survivors live in precarious conditions. Hundreds of people lined up for hours at an army relief station at Balakot to seek food rations and medicines. Many had walked for hours down through the narrow mountainous pass. “I come here every day to get food for my family,” said Khalid Rehman, whose wife and son are stranded in a remote village in Kaghan. The situation has remained unchanged for the last three weeks and the stench of decaying corpses fills the air. Relief workers warned of the outbreak of epidemics because of poor sanitation. The situation is not very different in other affected areas of northern Pakistan and Azad Kashmir.

Hundreds and thousands of survivors of the October 8 earthquake in remote mountainous areas, are now faced with a second wave of death with the advent of the harsh Himalayan winter. The temperature at night drops to sub zero and some areas have already received the first snowfall of the season.

The children will be the first victims in the second wave of fatalities. Doctors say older people and children are at risk because of deteriorating weather and inadequate medical and food supplies. Chest diseases are now common and several children have already died of pneumonia in the high altitude areas.

Children have been major victims of the quake. International relief agencies believe more than 40 percent of the casualties were children. They were the most vulnerable in school buildings. According to one estimate, more than 14000 schools have been completely destroyed with thousands of pupils trapped inside. “An entire generation is lost,” said Helen Kirby of Save the Children. The United Nations Children’s Fund (UNICEF) has warned that tens of thousands of children were in peril in the remote earthquake areas. The agency estimates that as many as 120000 children remain untreated in the inaccessible mountainous areas and some 10000 could die of hunger, cold and disease in the next few weeks. 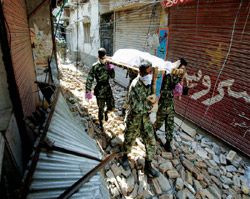 Doctors said the number of diarrhoea cases have increased alarmingly, while scores of people have died of tetanus. Hundreds of people still line up for hours every day at an army relief station in Balakot to get their daily food ration. Many complain that they have only one meal a day. According to aid workers, a lower than expected response from the international community, the scarcity of domestic resources and mismanagement have compounded the problem.

Even in those areas where aid has reached, many survivors have remained either totally unattended or received very little supplies. The UN has warned that thousands more will die in the second wave if emergency supplies do not reach them in time. Around 3.5 million people have been affected by the quake and some 80,0000 of them are still without shelter. Many are spending nights in sub zero temperatures and could die of exposure if they are not provided protection fast. Many families have only plastic sheeting to cover themselves in areas where the temperature drops to minus five at night. Blocked roads, snow and a serious lack of funding will turn the mountains into death traps for hundreds of thousands of quake survivors. “Our fear is that the aid may not reach these people in time to save them,” says Amanda Pitt, a UN spokesperson in Islamabad. Most people do not want to leave their villages and move to warmer areas where the government plans to set up tented villages. “We cannot leave the place where our people are buried,” said a resident of Kaghan. “Why can’t the government provide help in our areas?”

The dire prospect of hundreds and thousands of earthquake survivors dying from hunger, diseases and cold has sparked mounting public discontent with the way the government has confronted the disaster. While civil society and the general public responded with unprecedented zeal, the state has miserably failed to fulfil its responsibility. Whatever credibility the government had was buried under the debris of the earthquake. Pakistan’s greatest disaster has harshly exposed the weakness of state institutions.

For almost 72 hours the government remained in a state of inertia. The cabinet had no clue about the magnitude of the disaster and the military proved to be incapable of dealing with the crisis. It was shocking to see that it took so long to start rescue work even in the most heavily militarised zone of Azad Kashmir. In Bagh, one of the most devastated regions, there was no outside help available for two days.

People were in a state of shock when I arrived in Bagh on October 9. Dead bodies were littered on the streets and thousands of people were still trapped in the collapsed buildings. There were only a few able-bodied people who tried in vain to rescue those buried under tons of concrete with their bare hands. Army helicopters flew throughout the day to the army brigade headquarter to take out the injured soldiers. But none came to the rescue of the thousands of trapped civilians. That further fuelled the bitterness among the hapless people. “Why can’t they come here?”questioned a young man. His anger was palpable: “We have fought for Pakistan, but they don’t care for us.” The same sentiments were reflected everywhere in Azad Kashmir. Timely rescue efforts could have saved thousands of lives, at least in towns like Muzaffarabad, Bagh and Balakot.

Relief efforts were also delayed. Relief agencies cite lack of coordination between the government and the aid organisations as the crucial reason for help not reaching many affected areas. “There are scores of organisations working in the affected areas, but there is no coordination,” said Saad Yousuf, a spokesman for the NGO, Sungi.

A major reason for the slow relief process was that the entire operation was handed over to the army. The civil administration was nowhere in the picture, even in northern Pakistan where a local government is in place. Army troops can be more effective if they are deployed to assist the civil administration; they cannot be expected to manage the entire relief work operation.

Musharraf used the catastrophe to further tighten the military’s grip on politics and undermine civil institutions. The army is controlling everything, from relief to foreign donations — and it is not accountable to anyone. The cabinet and the parliament were completely bypassed and there is no one to provide any central leadership to the unprecedented public mobilisation. While the government was slow to respond and the army failed to deliver, the void was filled by non-governmental organisations and radical Islamic groups. It was largely through the efforts of these organisations that relief reached the devastated areas.

The Islamic militant groups, with their vast network and well disciplined cadres, were most active in the affected areas, particularly in Kashmir. The Jamaat-ud-Daawa’s camp, on a piece of sloping ground by the river Neelum in Muzaffarabad, illustrates their efficiency and organisation. Daawa, on the terror watch list, is the parent organisation of the Lashkar-i-Toiba, an outlawed militant group fighting the Indian forces in Kashmir. A cluster of almost a hundred tents provide shelter for displaced persons and house a mobile hospital where doctors from all over Pakistan and other countries perform surgery round-the-clock. Laying down their arms, hundreds of LeT fighters are now busy carrying relief goods, sometimes on their backs to those remote areas, which can only be reached by helicopters. Several other outlawed Kashmiri militant groups have also set up their own relief camps.

Just a couple of kilometers from the Daawa camp, is the newly set up American field hospital. “The Americans face tough competition from the radical Islamists in the battle for the hearts and minds of the Kashmiris,” says Rifaqat Hussain, a local resident. The radical Islamists have already made an immense impact in the region. While the government has been able to do very little, the burden of relief work has been taken over by the Islamists.

The growing influence of the Islamists may be a cause for concern, but there is little the government can do. In an interview, Musharraf has admitted that he was battling to assert the administration’s competence in the face of stiff competition from the militant Islamic groups. He said that he cannot stop them from relief work, but warned that they would not be allowed to exploit the situation and solicit new recruits. However, most political analysts agree, that with the credibility of the government and the army at its lowest ebb, it will be difficult to contain the Islamists.

The deadly Himalayan winter could be as bleak for Musharraf, as it will be for the desperate earthquake survivors.