The October 8 earthquake that shook Pakistan has given a new lease of life to many of the banned Islamic militant groups operating from the Pakistani-administered side of Kashmir. The most prominent among them is Jamaat-ud-Daawa, led by Professor Hafiz Mohammad Saeed, the former chief of the Lashkar-e-Toiba, which is fighting Indian forces in Jammu & Kashmir.

The militant groups in the quake-stricken areas of Azad Kashmir are following the pattern set by radical Palestinian groups Hamas and Hezbollah, which eventually adopted a humanitarian agenda in order to penetrate the masses. In sharp contrast to the government relief agencies and the army troops, the jihadi groups demonstrated tremendous efficiency in undertaking rescue operations in affected regions.

Reportedly, they were the first to respond to the huge human catastrophe in the quake-stricken areas and, within hours of the tragedy, had begun to rescue those trapped under the debris of collapsed houses as well as provide emergency treatment to the injured.

A cursory glance over the relief and rehabilitation activities being carried out by the guerillas turned philanthropists in Azad Kashmir shows that they are well-organised and devoted. The volunteers and infrastructure of the banned organisations are working night and day to help the quake survivors.

Analysts say that despite being proscribed and pushed back by the Musharraf regime after the 9/11 terror attacks, the Pakistan-based militant groups have retained their operational skills, proceeding to apply them with full force in the devastated areas.

Currently, over half a dozen banned militant groups can be seen carrying out relief work in the quake-affected areas of Azad Kashmir, with government permission. Initially, following government orders, the police authorities dismantled many such relief camps set up by the jihadi groups. However, they were later allowed to resume their activities, considering the magnitude of the disaster. The militant groups involved in relief work in Azad Kashmir are Lashkar-e-Toiba, Jaish-e-Mohammad, Hizbul Mujahideen, Harkatul Mujahideen, Tehreekul Mujahideen, Al-Badr, Hizbul Tehrir and Tehrik Nifaz-e-Shariat Muhammadi.

Most of the banned groups are working under different names. For instance, the banned Lashkar-e-Toiba is operating under the name of Jamaat-ud-Daawa (which has already been placed on the watch list of the ministry of interior), the Jaish-e-Mohammad (renamed as Khuddamul Islam) is working under the aegis of the Al-Rahmat Trust, while the Jaish’s splinter group, Jamaatul Furqan, has resurfaced in Azad Kashmir with a new identity: Al-Asr Trust.

Many jihadi organisations are either headquartered in, or have camps in Muzaffarabad, which is often called the ‘city of Mujahideen.’ When the quake struck, almost all major militant groups fighting in Indian-administered Kashmir had a presence in either Muzaffarabad or the adjoining areas in Azad Kashmir. Although their own assets were destroyed and their cadres killed, they were immediately out on the streets to help almost immediately.

However, the leadership of the Jamaat-ud-Daawa, which runs a chain of religious seminaries, schools, hospitals and mosques in Azad Kashmir, does concede that its hospital and several offices and mosques in Muzaffarabad, Balakot and Bagh have been destroyed and around 100 of its activists killed by the quake. But JuD leaders are confident of bouncing back in a short period of time, as they have sufficient resources and a strong financial network to recoup the losses they have sustained.

Despite being hard hit, the JuD, emerged as a resourceful entity after the tragedy. In the aftermath of the quake, the Jamaat-ud-Daawa was able to quickly establish a rapport with the masses, being more organised and disciplined than the relief agencies working in Azad Kashmir. Although hundreds of JuD activists died on October 8, the hectic relief activity it carried out in the quake stricken Azad Kashmir has not only bolstered its image, but has also won the group the gratitude and support of the general public. 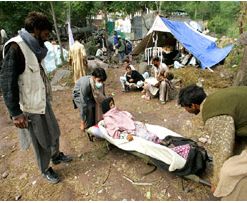 The JuD relief workers don’t wear uniforms, but people in the quake-hit areas of Kashmir recognise the erstwhile Kalashnikov-wielding, bearded, muscular men who are at the forefront of relief and rescue. The JuD describes efforts in Azad Kashmir as a new jihad or holy war.

A day after the tragedy struck, the JuD had launched a countrywide campaign to collect relief goods for the quake victims and rescue those buried under the debris of collapsed buildings. Because of its long association with the region, the group has been able to step in quickly where government response has been slow.

“Our first priority after the quake was to rescue our Muslim brethren and provide them relief,” said Yahya Mujahid, the JuD’s Central Secretary of Information. “Our relief workers had set up a tented shelter for 2,000 people, a dozen clinics for the injured and provided relief to 2,500 others in Muzaffarabad alone. Our workers also buried hundreds of unidentified bodies pulled from the ruins,” he added. He said the JuD was the only relief agency using boats to ferry the deceased and the injured. “Hundreds of residents from the Chahla Bandi village, situated on the Neelum River bank, would have perished had they not been rescued in time by our activists,” he said.

After the earthquake flattened most of the residential and commercial buildings in Azad Kashmir, the JuD promptly established a field hospital in Muzaffarabad, complete with X-ray equipment, a makeshift operating theatre, and even a tent for visiting journalists. The Jamaat-ud-Daawa Medical and Surgical Camps are the first stop for the hundreds of villagers straggling in after walking for days in the rugged terrain of the earthquake-stricken Neelum Valley. The large banner at the camp entrance reads in Urdu and English: ”Ambulance, Rescue, Needy Temporary Villages, and Burial.”

Interestingly, the person heading the Muzaffarabad hospital is none other than the country’s well-reputed orthopedic surgeon Dr Amir Aziz Khan. The elder son of Lt Col (retd) Aziz Ahmed Khan, Dr Amir was arrested on October 21, 2002 from his Lahore residence by the Pakistani intelligence agencies. The charges brought against the doctor revolved around his close association with some Taliban leaders, a few of whom he had treated after the Allied Forces attacked Afghanistan. Aziz has acknowledged in an interview with the Associated Press that he met bin Laden after the 2001 attacks and that the Al Qaeda leader was in good shape at the time.

However, Yahya Mujahid (CSI of JuD) asserts that the JuD is not associated with any terrorist group or individual and that they are not partaking in anything but relief activity at the moment. “The JuD normally considers its duty exclusively that of preaching and of public welfare,” he added. “It is time to wage jihad of a different kind, by helping the quake stricken people. Jihad has many meanings and it is not simply picking up a gun. It means helping, duty, passion — serving the people who cannot serve themselves. If you are serving the people in a natural disaster, that too is a jihad.”

Asked about the JuD’s relationship with Lashkar-e-Toiba, Yahya Mujahid said they no longer have any link with the LeT and that the insurgent group presently only operates from Indian-administered Kashmir. The US State Department had designated the LeT a foreign terrorist organisation in December 2001. Pakistan also banned the group and froze its assets in 2002, forcing LeT to reorganise and rename itself in order to separate its military actions in Jammu and Kashmir from its religious undertakings in Pakistan. On December 24, 2001, Lashkar founder Hafiz Saeed announced his resignation and appointed his right hand man, Maulana Abdul Wahid, as his replacement.

When stepping down, Saeed announced he would lead the Jamaat-ud-Daawa and that it would have nothing to do with LeT. Yet, the fact remains that today the two groups share the same headquarters in the town of Muridke, near Lahore. Since his resignation as LeT chief, Saeed, who ranks number five on India’s ’20 most wanted list of terrorists,’ took a number of steps to cover up his jihadi agenda and display a new philanthropist face to the world. The Hafiz Saeed-led JuD has assumed a new role — Khidmat-e-Khalq — which could help the group evade the accusation of terrorism.

Since the 9/11 attacks, the JuD has increasingly shifted its focus on to social welfare, which is part of its daawat (Islamic mission), just like jihad (the holy war). It has considerably expanded the base of its social welfare operations. Hafiz Saeed’s close circles say that the changing focus of the JuD activities, coupled with the caution exercised by him, has helped their group survive the fresh ban Musharraf had imposed on several extremist outfits in November 2003. According to Hafiz Abdul Rauf, chairman of the social welfare wing of the JuD, the organisation spent 45 million rupees on social welfare projects across the country last year.

In his October 20 interview with CNN, General Musharraf said: “I know that some extremist outfits placed on the government’s watch list are participating in relief activities in the quake-affected areas. Their activities are being watched closely and anyone found involved in extremist acts will be punished. However, everyone is motivated right now to help the quake victims. And I am not going to prevent anyone from helping the people.”

Musharraf’s statement was followed by that of Federal Relief Commissioner, Major General Farooq Ahmed. When asked to comment on the role of banned outfits in relief activities being carried out in the quake-affected areas at a news conference in Islamabad on October 20, he said, “The government could not stop anyone from participating in rehabilitation activities.” Elaborating, he said, “At such a critical hour, the support and assistance being offered by even an enemy, should be accepted.” Then came the statement from Islamabad on October 22, by Interior Minister Aftab Ahmed Khan Sherpao, who acknowledged the role of Islamist groups and declared that “They (the jihadis) are the lifeline of our rescue and relief work in Azad Kashmir right now.”

While many Indian analysts believe that the deadly earthquake may have significantly depreciated the extremist groups’ capacity to bolster the movement for liberation in Jammu and Kashmir, the militants have a different take on it. They consider the disaster to have provided them with a golden opportunity to reactivate themselves and improve their image among the masses. At this critical juncture when the Musharraf-led government was accepting aid and assistance from none other than arch-enemy, India, surely it could not stop them.

The militants are rising to the challenge in these quake-stricken areas and are winning over members of the public, says leading political analyst, Dr. Hassan Askari Rizvi, “While their popularity keeps soaring, the government appears to be moving without direction, leading Pakistan to a dangerous situation.”