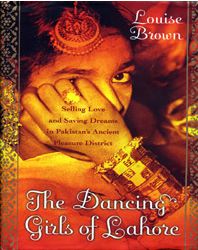 Heera Mandi. For centuries these two words have conjured up images of the forbidden mysterious world of the courtesan. The narrow alleys of Lahore’s walled city was once the traditional playground of the scions of Punjab’s powerful feudal families. Lured by the sound of the ghungroos, the haunting love-songs and the legendary beauties behind the trellised curtained balconies of Heera Mandi, there were manyho left their hearts at the feet of the dancing girls of Lahore.

Today, only the lowest tier in the courtesan hierarchy live and dance in Heera Mandi. The celebrated dancing girls and their powerful patrons have long moved on to up-market residential areas,taking with them the romance and allure that cloaked the sleazy, squalid reality of Heera Mandi.

Sociologist Louise Brown spent four years living in Heera Mandi and her book, The Dancing Girls of Lahore, chronicles the dreams and desperation of life in Heera Mandi through the eyes of one Lahori dancing girl — Maha and her family. It is an intimate, rivetting and poignant study that vividly captures the essence and soul of Lahore’s walled city.

Maha, a classically trained dancing girl, is in her mid-thirties and has five children from her various relationships. When she was 12, Maha gave up her virginity to an Arab Sheikh for two lakh rupees. She says the man was Sheikh Zayed. Five children down the line, Maha is overweight and riddled with insecurity, but still simmers with a magnetic sensuality. She doesn’t dance in the kothas anymore because she is the second wife of Adnan, who has now grown tired of his Heera Mandi “wife.” With financial support from Adnan drying up, Maha faces the dilemma of staying with her indifferent husband or reentering Heera Mandi. Both choices are doomed.

Maha drowns her hopeless existence with bottles of Corex, a strong codeine cough syrup. She swigs down a bottle in seconds and spends most of the day in a drowsy stupor as the day that her own daughters will have to enter the trade draws closer… “I think of the cycles of unhappiness emanating from Maha’s misery: cycles that are eating up her children and will probably consume their children in turn.”

Life in Heera Mandi has its own complex social structure. The traditional courtesan tribe, the Kanjars, follow a strict code of conduct and look upon new entrants with contempt. The old Kanjar women ran a matriarchal household where they reigned supreme. Men were just short-term guests. Today, the role of the Kanjar women has been taken over by professional pimps and only a few descendants of the Kanjars, like Maha, still control their own destiny.

“A competive hierarchy operates in Heera Mandi…thousands of women sell sex in the mohalla, but they inhabit separate social worlds. The elite are “A” class: young, beautiful with rich clients…middle-ranking women fall into the “B” category. The cheapest women, like those in Tibbi Gali are “C” category” — the most despised of the despised. The dregs of Heera Mandi live and practice their trade in Tibbi Gali. Here men can buy sex for as little as 30 rupees. “Women lean against door frames, lie on rope beds… they don’t look like women in other parts of Heera Mandi: there women are clearly for sale. Nazia wears the thickest makeup I have ever seen. It forms a pink-white mask… the layers building up for months. It’s hard to identity individual teeth because they’re so heavily furred by plaque and encrusted with food…in an hour Nazia has entertained five young men… the turnaround time is fast — perhaps five or ten minutes…Nazia’s bright mask is undisturbed by whatever goes on in the back room.”

The children of Heera Mandi have no official fathers or family name, so authentic documentation is almost impossible. “When Heera Mandi’s fatherless children encounter the bureaucratic world, Iqbal signs their papers to prove that these semiliterate and illiterate people are real.” Iqbal Hussain is the son of a courtesan, but also one of Pakistan’s leading artists and a professor at the National College of Arts. “To the people who live beyond the mohalla, he will always be the tough, streetwise son of a courtesan who grew up in a brothel and carried a gun to college… ‘We are the same,’ he says… ‘I don’t know who my father was either. Perhaps he was a painter too.’ ”

Today, Iqbal runs a restaurant in his home in Heera Mandi where Lahore’s Prada and Gucci clad social elite go for some acceptable forbidden thrills. “There’s something exciting and illicit about coming here, something that makes respectable Pakistani pulses race… as they peep into the courtyard — into the dangerous scandal that is Heera Mandi.”

Louise Brown writes with an evocative compassion of the world of Heera Mandi and the joy and love that lights up the filthiest, meanest hovel. There is the dignity of Tariq, the Christian sweeper, looked down upon by even the lowest prostitute; the young hijra Tasneem used and abused, but who gives her best dancing outfit to Louise; Nazia, the Tibbi Galli prostitute, who wants to make Brown look like “a pretty lady”; Maha’s daughters, Nena, Nisha and Ariba who can never fall in love, who know that their mother has no option but to barter them again and again to the highest bidder.

In the midst of unimaginable squalor and despair are moments of heartbreaking compassion, humanity, that inimitable brand of earthy Lahori humour and the generosity of spirit that colour the cruel cycle of life in Lahore’s ancient pleasure district.