It is easy to be taken in by the glitter, glamour and gloss of Dubai’s fabulous shopping malls, hotels and resorts. Not many people are inclined to think too hard about how they were built and, more crucially, by whom.

Based on the sparsity of its population, the emirate opened its doors to foreign workers in the earliest days of the boom, when it was little more than a sprawling village. In order to establish itself as an attractive proposition for workers from the subcontinent, it obviously had to offer markedly better pay scales than they could aspire to at home. And for families in Indian and Pakistani villages who had a member in Dubai (or elsewhere in the Gulf), there was often a palpable improvement in the quality of life. The authorities in the host country left little doubt, meanwhile, that there was a price to be paid for this relative prosperity. An attempted strike among construction workers in the days when theemirate was ruled by Sheikh Rashid bin Saeed al-Maktoum led to their wholesale deportation. They could easily be replaced: no matter how high the demand for labour, it was bound to be exceeded by the available supply. This made it easier to be intolerant of any form of collective action, let alone unionisation.

By and large, this pattern has held over the decades. In March 2006, workers at the construction site for Burj Dubai, touted at the time as the tallest tower in the world (it has since been overtaken by another plan for an even taller tower), spontaneously went on a rampage over poor conditions and subsequently went on a strike. Although anyone known to have been involved in the unrest was eventually deported, at the time the authorities appeared to cave in and went as far as to suggest that unions in some form would be permitted. At the same time, however, the British newspaper The Observer quoted labour minister Ali al-Kaabi as saying, “Intelligence he had received suggested radical tactics were being deployed in workplaces by militant left-wing Indians and Pakistanis intent on disrupting society.”

Dubai was mortified by the idea of damage to its image, which could hurt tourism and potential investment: there was little evidence of genuine sympathy for the workers. They weren’t even rated as a necessary nuisance whose quest for a modicum of dignity ought to be indulged. At the time, skilled workers at Burj Dubai earned $7.50 a day, while the unskilled had to make do with $4. Rates of pay across the construction industry are not uniform, but they are more or less uniformly based on the same principle: the maximum possible labour in return for the minimum possible remuneration.

Writing in Evil Paradises: The Dreamworlds of Neoliberalism (New Press, 2007), Mike Davis described Dubai as “a vast gated community, the ultimate Green Zone. But even more than Singapore or Texas, it is also the apotheosis of the neoliberal values of contemporary capitalism: a society that might have been designed by the economics department of the University of Chicago…an oasis of free enterprise without income taxes, trade unions or opposition parties.” Perhaps he ought to have added that it also demonstrates the ultimate fallacy of the trickle-down theory. As the wealth sloshing about in Deira and Jumeirah has increased, the generosity of those wielding it towards those instrumental in creating and sustaining it has been on the decline.

The contribution of the latter is usually only grudgingly acknowledged. Speaking to The New York Times last year, the aforementioned al-Kaabi, offering a fatuous argument against unionisation, noted: “God forbid something happens between us and India and they say, ‘Please, we want all our Indians to go home.’ Our airports would shut down, our streets, construction. No. I won’t do this.”

The Burj Dubai incidents were both preceded and followed by instances of unrest. The official response was invariably harsh. At the same time, the occasional effort has been made to introduce or enforce legislation aimed at ameliorating the plight of workers. However, such laws that exist are commonly honoured in the breach, often with official connivance. For instance, a long-standing rule holds that outdoor labour must cease if the temperature exceeds 50ºC. Funnily enough, even on the most searing summer days, the temperature officially never rises beyond 49.9ºC. And even that, mind you, is in the shade, whereas those toiling on construction sites are invariably bathed in sunshine.

Evidence of deaths from heat exhaustion or in building-site accidents is largely anecdotal, but suggests that the casualties add up to several 100 each year. And that’s not counting the suicides, generally attributable to sheer desperation.

Desperation also accounts for the fact that, year in and year out, thousands of people in countries such as India and Pakistan pay thousands of dollars (often accumulated by selling the few assets they have, or borrowed from loan sharks) to recruitment agents for job opportunities in Dubai or elsewhere in the Gulf. 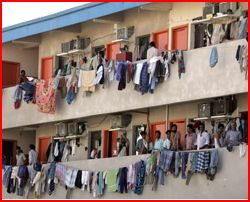 The recruitment costs are supposed to be borne by the firms that hire them, but that’s just the first myth they encounter — and it often takes them years simply to pay off the high-interest loans. Then, they are promised salaries that don’t quite materialise: pay packets often fall sharply short of legitimate expectations. A month’s annual leave and return tickets to visit their families? Many companies don’t honour this commitment either. Accommodation invariably turns out to be a small room, shared with at least half a dozen others, in a squalid concrete block at a labour camp (believe it or not, that’s what the proletarian outposts are officially known as, evidently without any hint of irony) located far away from the glistening shopping malls.

At least until a dozen or so years ago, those who found such accommodation were the relatively fortunate ones: the alternative for the lowliest was tin-roofed shacks that must have turned into veritable ovens under the desert sun. One can only hope they no longer exist.

The only sub-class of people even worse off than the average contract labourer are the so-called illegal workers who enter the country without any documents: naturally, they are unlikely to so much as whisper a complaint, no matter how egregious the indignities they face, even though they obviously meet a demand. If caught out, the best they can expect is imprisonment or deportation, or both. For legals and illegals alike, the inability to pay back even the smallest debts entails similar consequences.

The argument that working-class Asians who accept jobs in places such as Dubai have few grounds for complaint — given that they do so voluntarily, and usually because the prospects back home are even more abysmal — doesn’t hold a great deal of water. The premise may be accurate, but that hardly makes it acceptable to prey on the vulnerable. Meanwhile, minor tinkering with rules and regulations is generally meaningless, and rare labour court decisions in favour of employees rather than employers also don’t add up to much if they lead the latter to victimise the former.

The feudal structure of power in Dubai means that nobody has very many rights, including UAE nationals (when the country held its first “elections” to a powerless advisory council two years ago, the candidates as well as the voters — less than 1% of the population — were handpicked by the government). But nationals do have privileges, as do managerial-level expatriates (often recruited on the basis of skin colour rather than competence), and even median-level employees from the subcontinent are able to lead reasonably comfortable, albeit not exactly luxurious lives, provided they don’t question authority. However, those on the bottom rung of the wealth and race ladder have no privileges at all.

There are, of course, plenty of other dubious aspects to the tinted-glass mirage. For instance, there’s an entrenched culture of smuggling that predates the oil boom and the advent of the UAE. Plus a long-standing reputation as a money-laundering centre: cash has always been welcome, the more the better, with no questions asked about its origins. And underworld connections: Dawood Ibrahim, for instance, was long a privileged guest, until his presence threatened to cause a rupture with India. Nor has it escaped everyone’s notice that builders are able to contemplate the world’s tallest towers, evidently without fear of them being turned into towering infernos courtesy of Al-Qaeda, even though Dubai’s tolerance of what Islamic fundamentalists see as degenerate western behaviour would, on the face of it, make it an obvious target.

Notwithstanding all this, by far the most reprehensible officially-condoned crime in the emirate is the treatment meted out to foreign labourers.

A 100 years ago, a typewritten account of Dubai’s aggregate extended to just a few lines, and included the following items: 4,000 date palms, 1,650 camels, 45 horses, 380 donkeys, 430 cattle and 960 goats. Today, there are trillions sloshing about in the palaces and gated communities and free-trade zones and high-rise office blocks, not to mention race courses. Is it too much to expect the people who arguably have added more value to the emirate’s economy than any other segment of society to be compensated decently, if not proportionately?