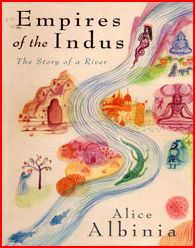 Alice Albinia pulls off a difficult feat with Empires of the Indus. She walks the reader through the course of a fabled river, all the way from the delta in southern Sindh to its source in the mountains of Tibet. The book recounts the decline and fall of ancient empires along the banks, weaving in anecdotes and encounters, marking the milestones of an inspired journey.

The river Alice extols is the once mighty Indus, now struggling to keep alive, threatened by man’s insatiable appetite for water.

The story begins in Sindh, the land to which Alice returned more than once. The journey runs in reverse, so to speak, from the delta up to the mountains and from the present to the past, although it does go the other way as well. Alice says she “doubled back,” at times, in search of more information or corroboration.

With just the ‘Urdu/Hindi’ learnt during a stint in Delhi and studies at The School of Oriental and African Studies (SOAS), Alice dealt with all and sundry, from the Sheedis of Badin to the nomads of Tibet.

The book begins in Karachi, where the author reflects upon the effects of Partition and the ensuing deluge. She takes a trip on a derelict fishing boat, up the Indus Delta. Here she tells us the story of Alexander Burnes, the Englishman who first explored the mysteries of the Indus, charting a course for Company Bahadur to follow. This is linked with the conquest of Sindh a decade later.

The trip upstream follows the Sufi path in Sindh. Along the banks of the Indus lived the saints who left an indelible mark on the history and culture of the subcontinent. Shah Inayat of Jhok who founded a ‘commune’ in the 17th century and paid for it with his head; Uderolal, the river saint; a little further upstream, the incomparable Shah Abdul Latif Bhitai and Lal Shahbaz Qalander of Sehwan, of whom it was said that he could influence the course of the river.

Alice undertakes a pilgrimage to these sites before following the Indus upstream to the punj ab — the land of the five rivers, its very name derived from the five tributaries of the Indus. She reflects upon the legacy of Partition — how not just Sikhs and Muslims who had lived together in harmony were parted, but even the rivers divided. Large dams were to come up and threaten their very existence.

At the time the research for the book took place, it was still possible to visit not just Swat, but Waziristan and the tribal belt. Not one to do things the easy way, however, Alice donned a shuttlecock burqa to make an illegal crossing to Afghanistan through Khost. This was one of the riskiest of her adventures. There is a walk through uncharted territory, in an attempt to follow the path Alexander the Great took from Kunar through the northern areas.

The search for the source of the river in Tibet proved even more hazardous. Alice set out with Karma Lama, a Nepali with “alcohol fumes rolling from him like a fog,” for a guide, and only a chance encounter with a Tibetan nomad, Sonamtering, that saved the day.

Celebrating the ancient civilisations of Harappa and Moenjadaro, the book completes its journey through 5,000 years of history. It ends on a note of warning: “The river is slipping away through our fingers,” says Alice, “dammed to disappearance.”

The book is packed with information gleaned from painstaking research. However, the story is as much an account of Alice Albinia’s encounters with the people, the waters, the hills and valleys of this ancient land as it is of the empires of the Indus. It offers insights into the rhythms of daily life, and a glimpse of its joys and sorrows. In just a couple of chapters, you may feel a bit lost if you’re not a history buff, but on the whole the past only serves to illuminate the present.

Empires of the Indus is hard to categorise, and its author probably did not want it to fall into any category too neatly. It is not a travel book in that it delves too deep into history and it is not an academic book for it is full of personal stories that enliven its discourse. Perhaps we should not try too hard to slot it into a category and take it for what it is — a very good read.