The release of the country’s most high profile prisoner, Asif Ali Zardari, could hardly be described as a triumph of justice. It was purely the politics of expediency that brought freedom to the husband of former Prime Minister Benazir Bhutto after eight years of incarceration and no convictions. Currently floundering in troubled waters, President Musharraf is swimming every which way he can, seeking reconciliation with the liberal secular parties whom he had unsuccessfully tried to wipe out.

Fifty-two-year-old Zardari, a former federal minister, was arrested in November 1996 after the ouster of his wife’s second government. He faced a number of criminal charges ranging from corruption to misuse of political office and murder. In September, a court overturned his conviction for receiving kickbacks from the state-run Pakistan Steel Mills during Bhutto’s tenure, for which he was sentenced for seven years. The Musharraf government, however, hung on to Zardari as a pawn or a likely bargaining chip, in the belief that at some point in the future his release could to be traded for some advantage to the government. And that is precisely what happened.

Most political observers agree that Zardari’s release could be part of the government’s attempt to woo Bhutto’s Pakistan’s People’s Party , which remains the strongest political force in the country, despite persecution by the military establishment. “It is a positive development which will play an important role in creating an atmosphere of reconciliation,” says Information Minister, Sheikh Rashid Ahmed. Perhaps in keeping with this “new spirit of reconciliation” Musharraf last week also telephoned former prime minister Nawaz Sharif in Jeddah to condole his father’s death .

Despite being a staunch ally of the United States in the war on terror, General Musharraf had continued with the traditional military-mullah alliance. He thought he could ally with the hard-line Islamic groups, cobble ties with Washington and make peace with India. But the arrangement has not worked. The political system the military had tried to build is becoming increasingly dysfunctional. Some of President Musharraf’s close aides contend that Bhutto’s secular party was much closer to their pro-west policies and the PPP’s support would be crucial to the government in combating Islamic militancy. 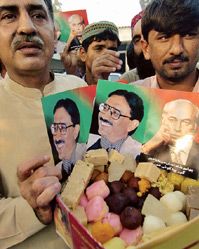 Zardari’s release has assumed greater significance at a time when the combined opposition parties have threatened to launch a nationwide protest against President Musharraf’s decision to retain his post of army chief, reneging on his promise to become a civilian head at the end of the year. It is quite apparent that Musharraf is holding out the olive branch to the two opposition parties, not because he is willing to concede anything, but because he wants the status quo maintained.

After spending eight years in jail, Zardari has emerged as a political leader in his own right. He was also jailed for two years after the fall of Bhutto’s first government in 1990. He has spent a total of more than 10 years in prison — longer than any other Pakistani politician. Even those PPP leaders who earlier considered him a liability, blaming him for the fall of the last Bhutto government, now recognise him as an asset to the party.

The military establishment started negotiations with the PPP immediately after the October 2002 parliamentary elections as the official PML-Q and its allies failed to get a clear majority. The military was even prepared to accept Amin Fahim as prime minister, but the talks failed after the government’s refusal to withdraw all cases against Benazir Bhutto and allow her to return to the country. 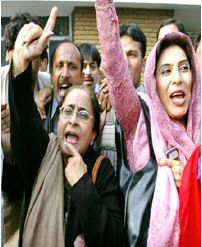 Interestingly, the ISI was negotiating with Zardari throughout this period. The establishment offered to make the imprisoned PPP leader deputy prime minister if Benazir agreed to stay away. With no hope of their offer being accepted, the establishment engineered a split in the party. Several of the PPP MNAs involved in corruption cases found it convenient to join the pro-Musharrraf forces. The renegades, who call themselves the PPP (Patriots), have been the key pillar of a fragile coalition, but the alliance failed to provide any stability to the new dispensation. The appointment of a technocrat prime minister has caused further disarray in the ruling coalition. Shaukat Aziz has failed to provide the kind of leadership that Musharraf needed to fight his battle in Parliament or to mobilise public support. His huge cabinet has only added to the confusion, while many senior ministers are openly critical of his attitude. With Chaudhry Shujaat Hussain as president of the party, Prime Minister Aziz has little control over the MPs, which is reflected in the growing number of absentees in the treasury benches. Reported differences with the Chaudhries have further undermined Shaukat Aziz’s position.

These underlining factors have probably compelled the military establishment to seek negotiations with the PPP. Senior ISI officials and a close associate of President Musharraf have been in contact with Zardari and some other PPP leaders, but the talks have yet to culminate in a deal. The release of Zardari’s release, however, could be described as a confidence-building measure. A major hitch in any agreement is the issue of Bhutto’s return home and her subsequent participation in the country’s politics. “She will not accept any deal which bars her from politics,” says a senior PPP leader. But, there is certainly a change in Bhutto’s tenor. She sounds much more conciliatory. “We don’t reject any dialogue with the government,” she said in a recent television interview. Zardari was more specific when he declared: “The generals have no choice. Either they work with us and the people of Pakistan or their institution is in danger.” It is, however, very clear that Bhutto, who got a significant political boost after her husband’s release, is not prepared to cut any deal on Musharraf’s terms.

Zardari’s release, coupled with speculation about an impending deal with the PPP, has thrown the ruling coalition into a panic. Shujaat Hussain, currently in America for medical treatment, is probably the person most peturbed by this development. There are fears that any deal with Bhutto and Nawaz Sharif could cause disintegration within the party. Similarly the Patriots are also feeling insecure and some of them are trying to patch up and return to the PPP’s fold. The dynamics generated by the release of Zardari could well derail the establishment’s carefully arranged apple cart.

Bhutto’s supporters are confident that Musharraf will be compelled to call early election. “The deal, when it is clinched, will surely enable Bhutto to return to Pakistan and lead the Pakistan People’s Party again,” says a political observer. Whether Musharraf and his generals will agree to Bhutto’s terms is today’s crucial political question. Most political observers believe it will not happen, at least in the near future. However, a worsening political confrontation does not bode well for the military ruler, who is facing, perhaps, the toughest challenge to his rule.

The PPP, meanwhile, is back in the political limelight once again. “We can wait. Time is with us,” declares a confident Zardari.