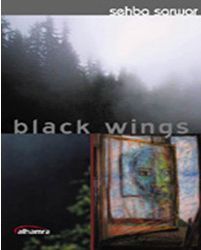 Some of the most interesting English language writing today is coming from young women writers of Pakistani origin. The work of those living in the diaspora, in particular, often expresses a unique sensibility, which places them on the edge of both western and Pakistani cultures — one which apparently allows limitless freedom and the other which seemingly permits none. In her first novel, Black Wings, the Pakistani American writer, Sehba Sarwar explores this dimension through the poignant lives of the widowed Laila and Yasmeen, her divorced daughter, both trying to cope with the death of Yasmeen’s 17-year-old twin, Yasir.

The loss of Yasir has been so traumatic for Yasmeen that once she leaves home and joins college in America, she cuts herself off from her family and Pakistan completely . Instead, she plunges headlong into a marriage with Jim, an American, which ends in divorce. Yasmeen is left as a single parent, holding down a job she hates, and looking after two children, Sam (Sameer) and Saira in Houston. She says, “There wasn’t any part of me, in any part of my life. Except for my children.”

Her sense of alienation in America has increased by the new post-9/11 hostility, which has even seeped into her children’s school.

The novel opens with the arrival of Yasmeen’s mother Laila from Pakistan, but her presence provides little comfort. She brings with her the attitudes and memories that Yasmeen has shut away. Laila’s mere presence in Yasmeen’s American home is an irritation to Yasmeen. Laila’s chance remarks constantly remind Yasmeen of Yasir and of Hawagali, the mountain resort where he died, and the dark, cloaked witches of mountain lore, which give the book its title and haunt Yasmeen in her nightmares. As the story unfolds with flashbacks to Yasmeen’s memories of Pakistan and the stories that Laila tells Yasmeen’s American children, it becomes apparent that Yasmeen’s anger goes much deeper: she holds her mother responsible for the events leading to Yasir’s untimely death.

The story is narrated alternately by Laila and Yasmeen, each haunted by memories of an abortive marriage. As Yasmeen comes to understand her mother more and learns of her poignant story and a carefully guarded secret, she finds many parallels between their respective lives. The special bond of twins is used very effectively to reconstruct Yasir’s brief life and his final hours, through Yasmeen’s dreams. This, in turn, also contrasts the dual worlds that Yasmeen has inhabited — as a child in Pakistan and an adult in America. The second half of this well-thought out, carefully planned novel, centres on Yasmeen’s visit to Pakistan and ultimately to Hawagali, where her twin died: it is there that Yasmeen finally confronts some home truths.

Sehba Sarwar is an instinctive storyteller. The power of childhood stories and Laila’s ability to transmute minor incidents into enchanting tales for children and endow them with the supernatural, is central to the plot. These define Laila’s relationship with her children and grandchildren. They are also pivotal to Yasmeen’s images of Hawagali and the magical, uncanny and bizarre encounters which she associates with them. The descriptions of the mountains, of Yasmeen and Yasir’s idyllic years together, are particularly vivid, as are Laila’s recollections of her tragic and loveless marriage.Black Wings is a promising debut by a writer with an ability to suggest and explore emotional complexity