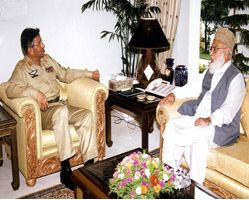 Exactly what the nature of the state is today — as opposed to what was envisaged by Jinnah, argues the country’s liberal intelligentsia — was made very clear by General Musharraf when he recently addressed members of the electronic media: “Pakistan is an ideological state; it is not a secular state. It is the Islamic Republic of Pakistan.” This unequivocal declaration came on the heels of the final verdict on the insertion of the religion column in new passports. Not only will Pakistani citizens have their faith etched in their passports, the state’s religious identity will be engraved on the face of each document as well.

So much for Jinnah’s speech to the Constituent Assembly on August 11, 1947: “You may belong to any religion or caste or creed — that has nothing to do with the business of the State…”

Notch one up for the country’s rabid rightwing who have since the Quaid’s death relentlessly attempted to reinterpret his philosophy, indeed, reinvent his image. That Pakistan’s religious and political rightwing have gradually managed to translate what was, until a few years ago largely nuisance value (formidable though it may have intermittently appeared) into tangible electoral and street power has become increasingly obvious.

Beginning with their clean sweep in the Frontier, their sizeable victory in Balochistan, and their substantial numbers in the National Assembly after the 2002 elections (and most recently their success in the bye-election in Malakand, ostensibly a PPP stronghold), the Musharraf-led establishment has given the mullah what even Zia-ul-Haq did not: he has brought the fundamentalist parties into the mainstream.

According to an International Crisis Group (ICG) report, “With [the government’s] patronage the religious right is fast expanding its political space.” Said Afrasiyab Khattak, formerly of the Human Rights Commission of Pakistan, “[the religious parties] phenomenal rise in October 2002 was not just coincidental, but a part of the political plans of the military.” 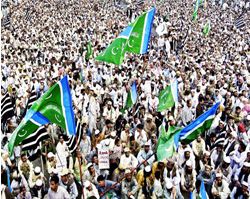 In the vacuum created by the absence of the PPP and PML (N) leaders to whom Musharraf refused a level playing field alongside his dispensation’s hand-picked contenders for power, the mullah, ever-organised and pumped up by the atrocities committed by western powers against the Muslim ‘ummat’ in the wake of 9/11, was catapulted to the country’s political foreground as a serious contender in the electoral race.

Since then he has never looked back — and the government’s response to his harangues has been retreat, rescind, side-step.

Consider the positions taken and backtracked on by the general and his dispensation. No sooner does Musharraf announce his admiration for Turkey’s Ataturk (and the country’s progressive element waits with bated breath for the general to cast himself in Ataturk’s image and deliver the people from the omnipresent spectre of extremism) that Musharraf has second thoughts: soon he is seen going to pains to state that he does not share the reformist Turkish general’s ideological and political sentiments.

Next comes the proposed amendment to the blasphemy law (and that too a relatively insignificant one). As soon as the mullahs start to agitate, the amendment is hastily withdrawn. 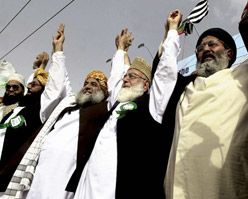 The pledge to register madrassahs and bring their curriculum into conformity with mainstream academic curriculae meanwhile, remains just that to date — a promise. In fact, rather than enforce the proposed Madrassah Registration and Regulation Ordinance of 2001, the government has withdrawn the ban imposed by the PPP in 1990 on madrassah registration. “To appease the clergy and to gain the religious parties’ support… President Musharraf placed madrassah reform on the backburner,” reads the ICG report “Most madrassahs are still unregistered, and the government now assures the clergy that it will not interfere in the madrassahs’ internal affairs.”

The PPP’s bill on karo kari submitted to the Assembly is trashed even before debate, but much credit is taken for the watered-down, insubstantial government-sponsored bill subsequently passed. When government party PML(Q) National Assembly member Kashmala Tariq submits a bill with a view to amend the law in order to make karo kari a compoundable offence, members of her own party join hands with the MMA Parliamentarians to kill the bill. Meanwhile Musharraf, while acknowledging that he “appreciates” the bill, says it failed to muster support because it was “inadequately presented.”

And as the mullahs’ attacks on the Aga Khan University Examination Board — a significant step in bolstering the quality of local education — set up courtesy a government of Pakistan Ordinance issued in November 2002, gain momentum, the government once again goes on the defensive. According to recent reports, the establishment has, in fact, considerably narrowed the scope of the Board’s operations.

Now it is the acquiescence to the reinsertion of the religion column in the new machine readable passports — at a cost of millions of rupees to the Pakistani exchequer considering the number of passports that have already been issued, not to mention the headache for citizens who have already availed of the new documents. Said Samina Ahmed of the ICG, “The decision was clearly dictated by the need to retain the MMA’s support, within and outside parliament, if the military-dictated political order is to survive.”

As for the government’s exit strategy — it seems to be ‘pass the buck.’ Said the President after the commission constituted to debate the religion column announced their decision, “It is the ministerial committee’s decision and we accept it.”

Subsequently, while addressing a group of PML(Q) Parliamentarians, Musharraf is reported to have said, “you are peoples’ representatives and you must play a role as leaders to guide people towards the goal of a dynamic and progressive Islamic state.” 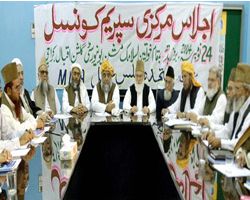 Pakistan’s information Minister Shaikh Rashid for his part, attempted face-saving for the Shaukat Aziz government, stating that the decision to debate the religion column was inherited by Aziz since it had been taken by his predecessor, Zafarullah Jamali.

If the government’s hasty retreats on major issues each time the mullahs raise their voice is not ample evidence of the latter’s growing power, their ability to muster street power is unarguable. The MMA rally in Lahore on March 23 may not have comprised a million people as claimed, but it did muster huge numbers — and compelled the ARD to cancel its own proposed rally the same day. The Lahore rally was followed by others (albeit smaller ones) in Karachi and Peshawar, and once again the numbers were enough to engender concern in liberal hearts.

For the fundamentalist parties, the current status quo makes for a win-win situation. Their protests against Musharraf’s uniform notwithstanding, it is in their interest that he remain in power.

As long as Benazir Bhutto and Nawaz Sharif can be kept at bay, the religious groups offer one of the few alternatives on offer in the country’s political set-up. Just how much lip service the MMA’s demand for a return to democracy — and in this context, of Bhutto and Sharif to the country — is, can be gauged by a recent statement made by Maulana Fazlur Rehman of the JUI, a component of the MMA. After Musharraf’s ostensibly conciliatory gestures towards the PPP leaders and widespread speculation about Bhutto’s return to Pakistan, the Maulana accused President Musharraf of promoting the PPP and weakening the religious parties because, according to him, “He considers the PPP the only moderate force in the country and wants to please Washington.” And the religious lobby’s anti-west, pro-Islam stance resounds louder with every Iraqi/Palestinian Afghan death, at coalition/ American/ Israeli hands. In fact, never before perhaps, has the global climate been more conducive to their professed cause.

For Musharraf, meanwhile, the more visible the mullah, the greater the bogey he can present to the US and the western world about the threat of extremism which he contends only a strong military man — not to mention an “enlightened moderate” can thwart. “The bogey of the mullah has served the general well in his dealings with the west, particularly in the United States where key policy-makers appear to have internalised the belief that Musharraf alone can keep the mullahs at bay,” said Samina Ahmed. Add to that the military mindset to which are intrinsic the Kashmir cause and the ‘strategic depth’ theory (Afghanistan), and to which the extremist element is inextricably linked, and the mullah-military nexus seems almost umbilical in nature.

With its rhetoric going in one direction and the one step forward, two back approach adopted by the government, particularly with regard to the religious right-wing, going another, which way the country is headed remains a moot point — but the indicators are disturbing.