“Musharraf is willing to take orders from anyone” 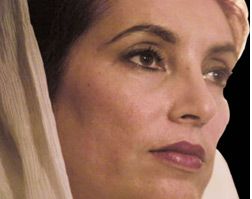 Q: Why do you continue to live in exile? Why don’t you return to Pakistan and wage a political struggle for the country’s return to democracy?

A: A political war can be fought from anywhere. I do want to go back, but if I return, [I suspect] they would tie my hands and I won’t be able to do much. It’s quite difficult for me not to be able to return to my country, but in my country justice has been murdered. My husband has been in prison for the last seven-and-a half years. Whenever he is freed by a court, he is re-arrested on other false charges. So, if I were to go back, I wonder what I could do for my party? But, having said that, I still want to return home whenever I get a chance.

Q: And when do you think you might get that chance?

A: I wish I could answer that.

Q: Political leaders fight from prisons. Are you afraid of going to prison?

A: No, I am not. I’ve been behind bars [before]. In a way, a jail is a place where you can rest, read books and live with yourself. But being in jail is difficult too because it’s like being in a graveyard, you can’t do much.

When I was in jail, Zia-ul-Haq became even stronger — and then, when I went abroad in 1986, I was able to expose him. In 1986 and later in 1989, when I was in the country, they were constantly maligning and harassing me. They didn’t even give me time to defend myself. Then my party colleagues advised me to stay out of the country and begin our campaign against martial law.

Q: Given that President General Musharraf continues to enjoy the support of the west and some political parties, how do you intend to proceed against him?

A: We want the restoration of democracy and an end to martial law, but General Musharraf has created a situation whereby the Taliban are asserting themselves once again, and there is speculation that Osama bin Laden has been [apprehended and hidden away] so that the world will [continue to] feel a need for Musharraf.

Our people are dying, poverty and unemployment are on the rise, but the rest of the world says that Musharraf is needed because [only] he can stop nuclear proliferation, [only] he [can launch] an operation in the tribal areas. So he manipulates and dangles some kind of carrot in front of the world all the time. This is not good for the people [of Pakistan], and I think the world has got it all wrong.

The PPP was waging a struggle inside the country and that was why we kept our doors open for negotiations with General Musharraf so that fair elections could take place. He imposed a ban on me [contesting the elections], but still we participated in them. Then Musharraf betrayed my party colleagues. He promised that he would hand over power to the PPPP if it won the elections providing it was minus Benazir. We won the elections but he did not transfer power. After that, we devised a strategy against the LFO. General Musharraf then went to the maulvis and begged them for their support. He told them that he would take off his uniform and send the judges home. So the maulvis gave him their support.

Q: Do you believe President Musharraf is taking orders from the US?

A:Whatever the US asks him [Musharraf] to do, he does, and when we say anything he calls it treason. He is willing to take orders from anyone. A phone call was made from the US asking him to get out of Kargil, and he got out — and left 3,000 of our soldiers to die in the snow. Then, when the Indian parliament was attacked, Vajpayee asked him to ban certain jihadi groups otherwise the Indian army would strike, Musharraf banned those outfits. He does all of that but I don’t know why he [insists on being] our enemy.

Q: But you have welcomed his efforts to improve relations with India…

A: Yes, we want good relations with India. We are not so narrow-minded that if an opponent does something which we believe is right, we still oppose him just for the sake of opposition. However, we do believe that military or dictatorial rule is not good for our country and we will keep fighting it.

Q: Recently the Pakistani scientist, Dr Abdul Qadeer Khan, was shown on television confessing that he was involved in nuclear proliferation. Would you comment?

A: Dr Qadeer Khan has confessed, but remember that he is under arrest and we don’t know what kind of pressures he is facing. As a former Prime Minister, it’s very hard for me to believe that Dr Qadeer Khan was involved in illegal trade at an individual level. I suspect that he was instructed to do so and now there is a cover-up. I feel sorry that an Indian scientist is a President while we have made our scientist a prisoner. If he has really done what is being claimed then he has betrayed the nation, but my heart doesn’t accept the fact that he has betrayed us. I believe the faces of those people who have harmed the national interest have yet to be unmasked.

Q: Who are those people?

A: I think the transfer of information to North Korea and Libya took place during General Musharraf’s rule. He gave orders, either as the chief of army staff or as President. Remember, that Musharraf went to Libya in 2000 and the deal with North Korea that Pakistan get missile parts in exchange for uranium from North Korea took place in August 2002, and a photograph of the shipment was taken by a spy satellite. So I think the nation needs to know and I demand that an enquiry be instituted to investigate who did what. If General Musharraf has [indeed] given the orders, he should be held accountable.

Q: But some accounts seem to suggest that a deal was struck when you, as Prime Minister, went to North Korea?

A: Well, this impression was being projected by certain quarters but it is absolutely wrong. I did go to North Korea, but when I went I wanted to acquire missile technology for my country. We established our Missile Technology Board in 1989 and built a missile that I named Zulfikar. It was to be test-fired in 1997, which was Pakistan’s golden jubilee year. However, this missile was later renamed Ghauri. I went to North Korea to learn about their technology. And we did acquire North Korean technology — but that was against money, not technology.