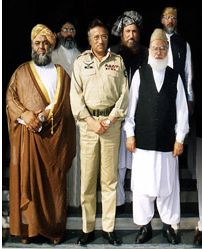 One of the reasons that people have difficulty in comprehanding General Pervez Musharaf’s rhetoric about promoting ‘enlightened moderation’ and combating religious extremism is the fact that the military and the mullah in Pakistan have become extremely close allies, with each drawing sustenance from the other. The bonds that unite them are rooted in their shared interests: both reject democracy except for using the electoral process to capture power or the legitimise usurpation of authority; both have nearly always displayed a lack of understanding of the federal principle; both repudiate women’s claims to equality with men; and both have difficulty in conceding patriotic conduct to non-Muslim citizens.

This understanding between the two sides has evolved over a long period. All military formations derive strength from one dogma or another. However one may define the role of the military in the affairs of a community, the most essential fact is that anyone who joins the military knows that he is in the business of killing or getting killed. Neither prospect can be entertained with equanimity without a strong belief in the military’s mission. This belief may be derived from nationalist ambitions or political ideology but the strongest motivation usually comes from religious belief.

The armed forces of Pakistan inherited a considerable number of values from the British, but they had to look for a new motivation. The belief that drove South Asian natives to risk their lives for causes assigned to the British Indian army had several components. Acceptance of the white man’s right to civilise the savage created the basis of loyalty which could cut across even religious affiliations, as became evident when our soldiers did not hesitate to fight against the keepers of holy places during the First World War. Moreover, membership of the military forces brought privileges not available to their compatriots. For instance, servicemen were counted among notables and ex-servicemen had the right to vote even if they did not fulfil educational or financial criteria for eligibility. The last Unionist premier of the Punjab sought independent status for his province as a reward for the services rendered by soldiers and drew up a five-year plan largely to meet the economic needs of demobilised troops. The British were careful to avoid interfering with the religious sensibilities of Indian soldiers and put greater store by the ethnic, caste, or linguistic bonds for bringing together soldiers subscribing to different religious codes.

One doesn’t have to catalogue the extraordinary privileges the armed forces have enjoyed in Pakistan, and the privileges multiply year after year. However, in the post-independence period, the military had problems defining its belief. The nationalist sentiment was in its infancy and the defence of the new state against threats from India was never considered sufficient motivation to lay down one’s life because commitment to the homeland could not grow without a long experience of a mutually beneficial relationship. There was an element of revanchist thinking born out of the forced adoption of the exploits of Arab and Turkish armies in various theatres of Muslim soldiery in India. These memories nearly always evoked religious emotion because most of the Muslim commanders operating in South Asia invoked divine sanction, even when the enemy also displayed an Islamic banner. Religion easily became the battle cry of the armed forces in Pakistan. Even Ayub Khan, considered in many quarters as a secular commander, fell back on the religious slogan when the 1965 conflict with India began. The literature and music related to the conflicts the Pakistan army has faced are saturated with religiosity.

Pakistan’s decision early in its life to join the western camp in its aggressive confrontation with the socialist bloc, tended to strengthen the pro-religion trends in the armed forces. In the beginning it was considered enough to protect the armed forces against exposure to progressive (condemned as leftist) ideas and disallow the entry of books and other publications containing such material in the military establishments but later on it was considered necessary to strengthen the religious bias among both officers and men by circulating texts by religious writers or publishing anti-socialist literature through a state-run book club.

Persistent indoctrination apart, the drift of the armed forces towards a religious ideology has been helped by two important factors. First, the policy of reducing, and in some cases blocking the entry of non-Muslims into the officer ranks has made for a more rigid and intolerant outlook on human beings in general. Secondly, the replacement of rural-based peasant stock in the officer ranks of armed forces by lower middle class and middle class urbanites gave the conservative elements of society a dominant role in the services. Unlike their rural predecessors, who pursued mundane material interests, these urban recruits brought to the services the religious opportunism of their class.

Ayub Khan is often credited with allowing the mess-culture evolved under the British to continue. This is only partly true. A more important fact is that his policy of suppressing democratic political activity created a big opening for the clerics to encroach upon political space. Consequently, at the end of Ayub’s dictatorship, the religious parties could lay claim to power on their own strength, but no political party, with the possible exception of the Awami League and National Awami Party, could do the same without inscribing some form of commitment to religion in its manifesto in a manner not done previously. However, it was General Zia-ul-Haq who raised the conservative clerics to the position of real contenders for power. The steps taken by him to cement the military-cleric alliance included:

Grant of generous facilities for the opening of religious seminaries, while restricting the growth of institutions of traditional education.

Creation of space for clerics in the legislatures, the bureaucracy and the judiciary.

Evolving a clumsy theory about the armed forces being defenders of the country’s ideological frontiers.

Making promotion to senior ranks in armed forces subject to one’s demonstration of qualities the Martial Law Chief considered essential in a holy warrior. The condition remained in force for almost a decade and produced officers who saw no harm in the Talibanisation of Pakistan.

And, above all, General Zia nearly completed the state’s transformation from an imperfect democracy in the western mould into a theocratic state.

What the military did to raise the political clout of the conservative forces during 1999-2002 is history in the making. The most dangerous thing about the military’s alliance with conservative, quasi-religious elements, from the point of view of the people of Pakistan, is that while the military has played a dominant role in strengthening the latter, in the long run it may not be the principal beneficiary of the arrangement. The military is unlikely to succeed in converting the cleric while its defences against the latter are so weak. The example of the genie becoming independent of the hands that enabled it to come out of the bottle fits the situation that Pakistan faces today so well that it seems the fable was authored exclusively for Pakistan.