The morning of October 9 dawned with a new surprise for the world. North Korea’s decision to conduct its first nuclear test sent shock waves all over the world, even bringing condemnation from Pakistan and India, two countries that had equally shocked the world in 1998 by conducting their nuclear weapons tests.

The power of the explosion conducted at 10:36 on Monday morning was estimated to be equivalent of about 500 metric tons of TNT, which, according to the news reports, is much smaller than the devices tested by India and Pakistan. The small size of the explosion makes experts doubtful about Pyongyang’s capabilities of developing a nuclear device.

Is it the first and the only test, which North Korea will conduct? According to the official statement issued by Pyongyang on October 10, it was preparing to conduct more tests and wouldn’t change course unless it got concessions from the international community, especially the US. Whether the US will play ball and sit down with a recalcitrant North Korea or adopt a stern attitude depends on two issues: US assessment of North Korea’s technological strength, and evaluation of the political cost of North Korean proliferation.

From a technological perspective, US experts do not appear impressed by Pyongyang’s nuclear capacity. It is believed that the device exploded recently was smaller than the atomic bomb exploded over Hiroshima in 1945 and has 25 to 30 times less explosive power than the Indian and Pakistani explosions of 1998. There are other reports that indicate North Korea might have the capacity to produce six to seven nuclear warheads. However, the fact remains that North Korea has, thus far, exhibited limited technological potential, which is not surprising.

The North Korean programme is not driven by the same logic as India and Pakistan’s. Although surrounded by powerful neighbours such as South Korea and Japan, two countries that have security cover from the US, Pyongyang could never aspire to counter the combined military might of the three countries or hope to elevate itself as a regional power. However, the country’s dictatorial leadership viewed its military technological prowess as a powerful bargaining chip in negotiating with its neighbours and the international community. In fact, a review of the history of North Korea’s nuclear activities bears witness to the fact that the country used its nuclear capacity to get certain concessions from the US.

In 1993, when Pyongyang announced that it was quitting the Nuclear Non-Proliferation Treaty (NPT), it led to negotiations between North Korea and the US, resulting in an agreement that the former would freeze and subsequently dismantle its nuclear weapons programme in return for international help in building two civilian nuclear reactors. The bilateral negotiations continued during the Clinton administration and resulted in the easing of US sanctions on North Korea. The US government showed its commitment to the bilateral agreement by allowing a US-led consortium to sign a US $4.6 billion deal with Pyongyang to build two light-water nuclear reactors in North Korea.

President Clinton’s approach was to offer North Korea a carrot in the form of this agreement to persuade it to refrain from carrying out further nuclear weapons proliferation. Pyongyang seemed to have agreed to play ball with the US administration. And there is a possibility that the country might have cooperated if the US stood by its commitment. 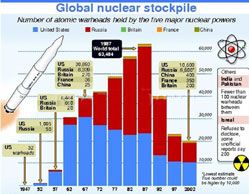 However, a fissure in the bilateral agreement appeared in 2000 when North Korea threatened to restart work on its nuclear weapons programme if the US did not compensate it for the electricity losses caused due to the absence of a civilian nuclear programme. Apparently, Washington was not eagerly pursuing its commitment to North Korea, resulting in delays in the construction of the two civilian nuclear reactors. Moreover, the tenor of the relations completely changed after George Bush’s ascendancy to power in the US.

The Bush administration dithered in resuming direct contact with North Korea, which the US President declared as one of the original three countries that formed the ‘axis of evil.’ The growing bilateral tension led to Pyongyang resuming its ballistic missile tests and it formally withdrew from the NPT in 2003. Earlier in December 2002, North Korea also removed IAEA monitoring seals and cameras from its nuclear facilities and threw out the international agency’s inspectors from the country. Since then, North Korea has insisted on directly engaging the US in talks and getting certain concessions such as American commitment to building a civilian nuclear reactor in North Korea and removal of the US financial sanctions.

Clearly, the North Korean decision to finally test a device is to raise the stakes and attract American attention in taking Pyongyang’s threats more seriously. Unlike India and Pakistan, North Korean leaders view their nuclear capability as a bargaining tool, which, in their assessment, might work on Washington. So, while it is not possible for India and Pakistan to roll back their nuclear programmes for their own reasons, there might still be a possibility of negotiating with North Korea.

The decision to test also reflects an understanding of US non-proliferation policy that denotes a greater sensitivity towards using power and force as a means of curbing the horizontal proliferation of nuclear technology, rather than strengthening non-proliferation as a norm. Since President Bush’s ascendancy to power, the US has backtracked from supporting all treaties and agreements that would strengthen non-proliferation or overall arms control as a norm. For example, the US has gone back to beefing up its own security through its controversial ballistic missile programme, which is a death knell for the NPT. It has even dithered in supporting the UN agenda on curbing the proliferation of small arms and light weapons.

The policy perspective underscores the power of individual nation states rather than emphasising the importance of strengthening international norms for arms control and non-proliferation. Obviously, other states aspiring for nuclear power see this as a window of opportunity to negotiate their own place in the hierarchy of nation states, based on their military technological capabilities. Indeed, both India and Pakistan adopted this route in redefining their relationship in the larger comity of nations. For India, the nuclear tests in 1998 were important to establish its superior capacity, which New Delhi considered a vital tool for being taken seriously in global politics. The geo-political norm set by the US was that military technology was crucial in determining a state’s position vis-Ã -vis other countries, especially if the state, like India, planned to play a role in global politics. India’s nuclear proliferation, as a matter of fact, was eventually accepted due to America’s strategic need of partnering with New Delhi versus Beijing.

In Pakistan’s case, on the other hand, the need for security was paramount in determining the way forward. It had to conduct the nuclear tests to establish its capabilities and to avoid the threat of nuclear blackmail by India.

The North Korean imperative for testing, however, is quite different. The country, as mentioned earlier, has sought the non-conventional defence capability to seek certain concessions from the US. The lesson that North Korea, or any other state hoping to join the nuclear club, seems to have learnt from the Indian and Pakistani examples is that once a certain level of force and capability is acquired, even the most powerful nation would have to recognise the force and negotiate logically. Logic, in this case, means that the US would think twice before using military force against North Korea. In fact, the expectation is that Washington would have to consider returning to the negotiation table and working out a deal with Pyongyang.

Considering the complexity of power politics, it is possible that the US would eventually agree to discuss the issue with North Korea and grant it certain concessions in return for verifiable assurances that the country would not facilitate further proliferation. The Pakistani case indicates the importance of developing communication and getting guarantees regarding better control of the nuclear programme. The Dr AQ Khan network, it must be mentioned, was busy selling nuclear technology at a time when the US had turned away angrily and imposed economic sanctions on Pakistan. For Washington, the greatest worry is to see such a development being repeated.

The UN financial and weapons sanctions, which the Security Council agreed upon to impose on North Korea on October 14, are meant to force the country to reconsider its belligerent stance. However, given the nature of the North Korean political system, the state appears inclined to bear the cost of such sanctions and stick to its guns in negotiating the issue. Clearly, the lesson learnt from the Indian and Pakistani case is that greater resilience has its dividends. Pyongyang will maintain its policy position unless it gets certain concessions out of the international community, especially the US.

Moreover, from a long-term perspective, the nuclear proliferation problem is not likely to get resolved unless Washington agrees on strengthening the NPT as a globally accepted norm.