How the Referendum was Won

On the morning of April 30, at a polling station in Fatima Jinnah Women University,…

The state-sponsored campaign to garner support for General Pervez Musharraf in the referendum, moved towards…

Despite its hectic efforts, the government could not win over the major political parties in…

“Either I could lie to save my job, or tell the truth to save my…

When a couple was arrested on March 24 from Kud, about 100 kilometres from Jammu,…

In a cramped, airless cell, Zafran Bibi, 28, sits listlessly in semi-darkness with her seven-month-old…

War is omnipresent. An intrinsic thread running through the fabric of Afghan life for a…

Night of the General

The woman was a phenomenon. Easily the most influential figure during Pakistan’s second military regime,…

Paul Theroux’s Fresh Air Fiend is a collection of masterful travel writings. It touches down…

Hot on the heels of the unprecedented take-off in advanced economies of modern communications technology,… 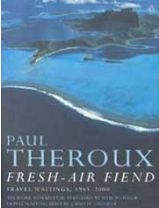 Paul Theroux’s Fresh Air Fiend is a collection of masterful travel writings. It touches down on five continents and floats through most seas in between to deliver a literary adventure. Theroux demonstrates how the travelling life and the writing life are intimately connected. Central to a number of essays in Fresh Air Fiend is the idea of becoming a stranger, travelling abroad to escape familiar surroundings, and how that perspective relates to being a writer. His journeys to remote hinterlands and crowded foreign capitals provide the necessary perspective to “becoming a stranger” in order to discover the self. c

Thus “Being a Stranger” is about the root causes of why and how Theroux became an inveterate wanderer and consummate wordsmith. “I was an outsider before I was a traveller; I was a traveller before I was a writer; I think one led to the other.” The second essay, “Memory and Creation,” offers a thoughtful reflection on the writer’s craft. Few of the other selections — there are more than 50 — are so self-consciously analytical. They are more straightforward. However, in spite of the keen observation, wit and insight, a certain disquieting undertone, is very evident as in “Unspeakable Rituals and Outlandish Beliefs,” which is the title of one of the most interesting, albeit controversial, essays in the book. In the book’s title essay, Theroux explains his need for solitary exercise, to assuage “the loneliness of the long-distance writer.”

Theroux writes of a solitary week in the Maine woods in wintertime. He travels down the Zambezi River, and the Yangtze. He kayaks in the Philippines and visits Hong Kong on the eve of the handover to China. A film star provides entertaining material when spotted emerging from “Lucky Sauna” in Kowloon. The establishment is a ‘gai dao’, or ‘chicken house’, and if Theroux has an eye for the seamy side, he can deal with pathos too, when he interviews a survivor of the Christmas Island H-bomb tests: ” ‘Like a big flower opening,’ Ambo thought, ‘the colour of clouds, with flames inside.’” Getting off easier, at least with more humour, are the multimillionaires whom he joins for a jaunt down the Yangtze: “At the Wuhan Conservatory, Mr Jones asked, ‘What is the name of this instrument?’ He was told it was a harp, but he wanted its Chinese name. The musician looked at him and said loudly, ‘Zhong!’”

In the trip up the Yangtze River in China, Theroux takes you on a Heart of Darkness-esque journey into China and guides you through the country’s turbulent clash between modernisation, industrialisation, communist beliefs and free-market sensibility, contemplating the likely outcome of China’s fight for a place in the world. The book jumps from post-Mao China and years spent as an Africa-based Peace Corps volunteer in the ’60s to turtle watching in Hawaii and kayaking on Cape Cod. In Africa, Theroux was a muzungu, a word for white man, which also implies spirit or ghost figure. Elsewhere, travelling in China and Hong Kong, he is a gweilo, which has similar connotations in Chinese. He is the shadowy figure that has witnessed many of the culture changing events of our times.

In Robinson Crusoe, Theroux goes to an unnamed island off the coast of Guam, identified only by its global positioning coordinates, where he humorously tries to turn an unspoiled utopia into a wired world. Armed with a satellite phone, an electronic notepad, beeper and video camera, he soon finds that the batteries run out within a half hour, “it seemed pathetic that the vitality of such sophisticated electronics depended upon such clumsy, feeble batteries…. My uplink was as useless as the doubloons that Robinson Crusoe mocks on his island.”

However, it must be said that Fresh Air Fiend can appear to some as having a somewhat unsettling staccato quality as the author abruptly moves from place to place, from topic to topic and, more annoyingly, eschews any chronological order. This is not a book for people who read cover to cover but like to pick and choose the stories in an anthology.

Among the essays are introductions to the work of kindred spirits, Joseph Conrad, V.S. Pritchett, Henry Thoreau and Graham Greene. This section of the book is all too brief but intriguing as he takes on such writers as Daniel Defoe, William Simpson, and Bruce Chatwin, all of whom shared his fascination with other peoples and other places. His essay on his friend and fellow travel-writer, Bruce Chatwin, offended Chatwin fans, until corroborated by a recent biography. His book, Riding the Iron Rooster, was judged by some to be too harsh on China, until TianAnmen Square. His memoir, Sir Vidia’s Shadow, seen by some as a friendship-nuking book on V.S.Naipaul, continues to stir controversy .

[A companion volume to Fresh Air Fiend is Theroux’ Sunrise with Sea Monsters].