“There’s no room for clergy in Islam” 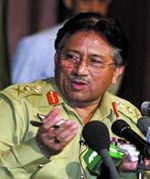 A: This is more important.  This sets a direction for the country, that was a response to a terrorist attack.  I have been moving in this direction since a long time.  Even in my october ’99 speech I had stated that we have to eradicate sectarian extremism from Pakistan.  We are all Muslims, we don’t want to be divided into extremists and moderates.  There shouldn’t be differences within the religion itself — I want to bury sectarian differences.  I want to take everyone along…

A: This is certainly a doubt  [problematic area] but, personally, I think we must win through superior intellect, argument…

It’s only a few religious extremists… they have a vested political interest, they have a vested interest in making money and then, of course they want to use their clout and try to slow down everything… They’re not ready to accept that they’re illiterate, that they don’t have the education, but they want to dominate the field of religion and that’s not right.

There’s no room for clergy in Islam.

Q: So the war remains to be won?

A: I don’t think I would describe it as a war.  Yes, it hasn’t been won, we have to convince people and take the nation along. I personally feel the speech has helped educate everyone’s minds and the vast majority do agree.  But there are some who don’t agree and I would like to convert them to my point of view.  [Then too] a very small minority element would remain who would like to agitate and undertake criminal extremist acts.  We have to confront them with law-enforcement agencies and bring them to justice.  This process has already started.

Q:  Would you comment on the pressure Pakistan faces from India on the issue of terrorism?

A: I think it’s terrible, the comments they are passing… they are waiting to see action. What action?  I certainly am not interested in proving anything to them; I am simply doing something for the nation.  I am more concerned about Pakistan.

Q: How would you assess the present situation vis-a-vis India?

A: From a military point of view, there are always two aspects — the enemy’s capabilities and the enemy’s intentions.  Way back, when people used to ask me, are you quite optimistic that nothing will happen, I would say yes, because their forces are not deployed.  But now by deploying their defensive and offensive forces, the army, navy and air force, they have developed a capability for any kind of operation anywhere.  Therefore the situation becomes very dangerous.

We have to de-escalate, we have to remove the capability.

Q:  How has India’s mobilisation of troops on our borders affected the defence of our Afghan border?

A: It’s difficult because we are a small force.  We have a  much smaller army than the Indians and every unit and every brigade is required.  Deploying anything elsewhere will certainly weaken our position against the western front, therefore I would say it’s a cause for concern.

Q:  Have you removed any troops from the western border?

A: Troops have been removed but not those sealing the western border.

Q:  How have the Kashmiris responded to the formation of the Kashmir Committee?

A: It’s been well received by the Kashmiris.  The Kashmir Committee comprises the Kashmiris and the Pakistani political leadership.  It’s a committee [to secure] the rights of the people of Kashmir through a peaceful dialogue with India.

A total unanimity of views exists within the committee and everyone has shown a resolve to support the Kashmir cause domestically and politically, as we have been doing [in the past].

Q:  It is being said that you have banned certain religious parties under pressure from India…

A: This is a misconception created by the Indians, who keep saying that whatever happened in Kashmir was exported from outside.  … actually it was a political movement which began in Kashmir.  People took to the streets to demand that India get out of Kashmir.  They [the Indian forces] suppressed this totally civil agitation, and when they suppressed it, those people went underground.  The freedom struggle was a consequence of the suppression by the Indian forces of the Kashmiris’ peaceful struggle through civil agitation.

Last year, these mujahideen declared a unilateral ceasefire and the Indians refused to talk to Pakistan saying this was a local, indigenous affair of India and they would talk to the mujahideen.  They themselves said it was indigenous.  So who exactly are they (the mujahideen)?

Q:  Fears are being expressed in certain quarters that Pakistan has abandoned the Kashmir cause…

A: I don’t think so at all.  There was apprehension and I clarified that Kashmir runs in the blood of everyone and I didn’t say anything unusual.  We will continue to give all diplomatic, political and moral support.

Q:  What are your views on the nuclear question?

Q:  Would you agree that this region faces the greatest risk of a nuclear conflict?

A: Yes, I think so, because one of the most serious conflicts in the world [exists] in this part of the world, and that is the Kashmir [dispute that has been], going on for over almost fifty years.  The countries being nuclear-capable, one realises the dangers.  That’s why I keep saying we have to resolve the core issue, otherwise the danger remains.

Q:  Is there danger of a conventional war?

A: They [the Indians] have downgraded their air [reaction] forces.  And some [ground] forces that would give them the full potential for an offensive, they have not been deployed.  Let me assure you from a military, and a diplomatic and political, point of view… I don’t think there can be war, unless there’s some mad action — but then, that’s always a possibility.

Q:  What is the solution?

Q:  Did you send a message to India through Mr Colin Powell?

A: Yes, I told him that we are for peace with India, for reconciliation and dialogue and moving forward on Kashmir.

Q:  What transpired during your trip to China?

A: The Chinese are our time-tested friends, we want to keep them informed.  Of course they were concerned about the tension along the border.  They are very keen to contribute to the de-escalation [efforts]; they certainly are our great friends.  They are with us, they stand by us. I don’t have words to express the warmth that Jiang Zemin extended to us.  The Chinese don’t normally shake hands but when I was leaving he held my hand like a Pakistani, not letting it go.  He held on and he said, in my ear, ‘We will always be with you.’

Q:  How do you view the situation in Afghanistan now?

A: Afghanistan is doing well but I wouldn’t say that all its problems are over.  A political framework has been put in place and this is an excellent beginning.

We hope that with the creation of the loya jirga after six months, a more balanced and more equitable representation is maintained in the political structure.  I’m reasonably optimistic that the arrival of the multinational force will bring more harmony between the various ethnic factions.  And if the military operation also ends, there will be further improvement in the situation.

Q: Where do you believe Osama bin Laden might be?

The second possibility is that he is alive and somewhere in his cave…these mountains are such that you cannot cover every inch of the area; it’s even impossible to bomb every inch of territory there.

Possibility three is that he has escaped from Afghanistan and gone somewhere, and the last possibility is that he has escaped to Pakistan.  I’m stating this as the last possibility because we have deployed troops everywhere; we have taken the tribal leaders into confidence and they have assured us that they would tell us [if they learnt of bin Laden’s presence in their area].  He is not the kind of man who can hide so easily  and this is not an unpopulated area.  There are many who would reveal it if he were here.  I am sure of that.  And yes, [then there are the] 25 million dollars also.  Therefore, I maintain that this is the last possibility.

Q:  Did September 11 provide you the opening you needed to proceed against the extremists?

A: I wanted to do it from the very beginning, but my first priority was economic stability.  However, I had initiated action against them before September 11.  I banned two sectarian groups in August.

Q:  Why then, did you backtrack on the blasphemy law?

A:  I backtracked on it because I wanted to bring economic stability and didn’t want to open too many fronts.  Now I feel much more confident.  Everything is in place.  But I have to move carefully, these are very very sensitive issues.

A: Yes, that’s because frankly everything is in place now.  You ask me anything about Pakistan and I’ll tell you what we’re going to do, because we have thought of everything.  In the [initial days], we used to have cabinet meetings every Wednesday without fail.  We would discuss issues for 8 to 10 hours.  We took up every issue.

We don’t have much to discuss now, so we hold meetings after a gap of two to three weeks.  That’s why I can play tennis now, I can visit friends in the evening, I was working in three shifts before — 18 hours a day — because there was so much to be done.

A: Yes, but we have to keep moving forward, not slipping back.  I will hold elections as promised, but I will not allow the return of the rule of loot and plunder.  We didn’t have any democracy in the past.  We want democracy, [but] it has to take root and flourish.  We will bring the correct democracy.

Q:  Do you plan to remain president?

A: Yes, I will continue as president.  I have to do it not just for my sake but for the sake of the nation.  For continuity and stability, it is necessary.  It takes some time for  democracy to take root.

It’s right that I’m there, that I remain there.  But we have to formalise it through some constitutional method that remains to be determined.  These are the questions that have to be resolved finally. But I’m not going.