The Song Remains the Same

Can the Coalition Survive?

Ninety days after the elections, the issue of the restoration of the deposed judges continues…

If At First You Don’t Succeed…

Children crying, men and women desperately searching for their loved ones, blood splattered all over…

Never the Twain Shall Meet

In what must be a record of some kind, the Tehrik-i-Taliban Pakistan (TTP), the umbrella…

In the aftermath of 9/11, Pakistani students faced long security clearances and a myriad of…

Since its inception, Pakistan has had a turbulent political history, chequered with military takeovers, political…

Not the Entire Story

The launch of art critic Salwat Ali’s book, Journeys of the Spirit: Pakistani Art in…

In the last decade, the neo-miniature has acquired the status of a genre of expression…

Since its inception, Pakistan has had a turbulent political history, chequered with military takeovers, political assassinations and two wars, one of which led to the division of the country. An air force officer who became an ADC to three presidents, Ambassador Arshad Sami Khan has had a ringside view of Pakistani politics, most significantly the East Pakistan debacle which continues to be mired in controversy. Starting his career as an aide to the president Ayub Khan, the author of Three Presidents and an Aide survived the changes of regime and continued to serve in this capacity under General Yahya and later Zulfikar Ali Bhutto. In fact, he even served as chief protocol officer under Benazir Bhutto, to whom the book is dedicated, and subsequently enjoyed a distinguished career in the foreign service. 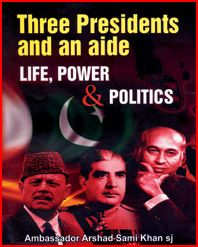 Starting his career with President Ayub as a young man in his twenties, Arshad Sami Khan was understandably quite taken by the imposing field marshal, whom he recalls fondly. In fact, Sami Khan and his wife felt nurtured by the warmth and affection they received from both Ayub Khan and Begum Ayub, who they remember as ‘Maaji.’ He laments, for instance, that there is no monument or road in Islamabad to remember Ayub, whom he credits with founding the city.

Fortunately, the author’s personal regard for Ayub Khan has not completely blinkered him to his leader’s flaws. Like all military rulers, Ayub Khan wanted absolute control and like all dictators he could not brook the popularity of another. He removed the massively popular governor of East Pakistan, General Azam Khan, simply because he felt threatened by him, and replaced him with the ineffectual Monem Khan. Sami Khan relates some hilarious anecdotes about the new governor who seems to have been picked for the job only for two reasons: first, he was a Bengali; second, his lack of intellectual stature.

On one occasion, the governor was required to translate the president’s speech at a public rally. Monem Khan reportedly snored through Ayub Khan’s speech and when the time to translate came, he delivered a fiery tirade in Bengali, littered with quotations from Ghalib and Iqbal, which had no resemblance to the president’s address but which, in Monem Khan’s opinion, was what the people wanted to hear. In another stroke of misguided ingenuity, the governor engineered traffic jams on President Ayub’s arrival in Dhaka to give him the impression that huge crowds had turned out to greet him.

While East Pakistan was left in the care of the inimitable Monem Khan, Ayub Khan also began to have misgivings about his governor in West Pakistan, the Nawab of Kalabagh, who had been a close personal friend. Apparently, the Nawab had been turning away members of Ayub Khan’s family, who would approach him for favours. To Ayub, his family was his weakness, and although not a corrupt man himself, he turned a blind eye to the misdoings of those dear to him. The Nawab of Kalabagh was replaced by General Musa who, according to the author, was a thorough gentleman but a weak ruler.

The book also includes some amusing stories involving foreign dignitaries. For instance, Marshal Tito going on a duck shoot with Ayub Khan and falling into the water or the one about the crass US ambassador who was put in his place by the president.

As Ayub Khan’s reign came to an ignominious end, and Yahya Khan took over, Sami Khan became his ADC. The author attempts to present a more balanced picture of the bushy browed general who, he feels, was unfairly apportioned all the blame for the breaking away of East Pakistan. The author points out that the creation of a country with two wings, both so culturally different, was flawed from the start. He then sheds light on the slow build-up to the debacle which began in Ayub Khan’s era and later gained momentum with the language riots and the rise of Sheikh Mujib’s brand of nationalism. Negating the predictions of General Yahya’s advisors, the elections held by Yahya saw the two wings of the country completely polarised, with Sheikh Mujib winning a massive majority in one wing and Zulfikar Ali Bhutto sweeping the other. Once regarded by Ayub Khan as his “fifth son,” Bhutto had already had a falling out with him and now proved even more difficult to rein in after his electoral sweep. Following his well-documented inflammatory statements, the situation only spiralled out of control. Critics have often painted Yahya Khan as a drunkard and a womaniser who caroused while the country burned. But the author refutes this picture and points out that other players shared equal responsibility for events at that time. However, while he speaks of the havoc wreaked on non-Bengalis in East Pakistan, he is completely silent on the atrocities committed by the West Pakistan army. This is a surprising, indeed glaring, omission, which tends to weaken the author’s credibility.

Yahya Khan was a colourful character and Sami Khan refers to “the teenager in him” who loved revelry but which, he claims, was of a harmless nature. The book includes several anecdotes about the general, which give the true story behind some of the scandalous incidents attributed to Yahya Khan. There is also an interesting account of the first Islamic Summit Conference, where Yahya Khan adroitly averted a disastrous situation being engineered by the Indians. It is apparent that India was always a step ahead of us in diplomacy and has had the ear of world powers, mainly because that country is led by democratic governments while Pakistan has been managed by military dictators.

As governments fell, quite acrimoniously at that, Sami Khan continued as ADC and next served with the mercurial Zulfikar Ali Bhutto. The author attests to his brilliance and his massive popularity; he was a messiah-like figure to his voters. However, since he considered himself intellectually superior to most others, this democratically elected leader was even more dictatorial than the military despots who had been at the helm before him. A brilliant orator, Bhutto was also an insomniac who would carry out surprise visits in the middle of the night. In fact, his first cabinet was sworn in at 4.30 in the morning and Sami Khan and his associates had a hard time convincing potential cabinet members that they were not playing a hoax on them.

The author recalls Benazir Bhutto with great affection and has some endearing tales of her meetings with world leaders like Yasser Arafat and Gaddafi, who shared warm relations with her father. He was also with Benazir when she received news of her first dismissal from office.

The narrative throughout the book is up close and personal, outlining the idiosyncrasies, strengths and flaws of those who have shaped our history. Arshad Sami has been privy to strategic meetings, sensitive telephone conversations as well as relaxed evenings with these leaders, which makes this account highly readable. Stylistically, the book is simple but could have done with tighter proofing and, of course, there will be many who disagree with this interpretation of events. Perhaps, it will encourage others who have been closely associated with these crucial events to speak out as well.