The Song Remains the Same

Can the Coalition Survive?

Ninety days after the elections, the issue of the restoration of the deposed judges continues…

If At First You Don’t Succeed…

Children crying, men and women desperately searching for their loved ones, blood splattered all over…

Never the Twain Shall Meet

In what must be a record of some kind, the Tehrik-i-Taliban Pakistan (TTP), the umbrella…

In the aftermath of 9/11, Pakistani students faced long security clearances and a myriad of…

Since its inception, Pakistan has had a turbulent political history, chequered with military takeovers, political…

Not the Entire Story

The launch of art critic Salwat Ali’s book, Journeys of the Spirit: Pakistani Art in…

In the last decade, the neo-miniature has acquired the status of a genre of expression…

The launch of art critic Salwat Ali’s book, Journeys of the Spirit: Pakistani Art in the New Millennium, a compilation of her articles and reviews written between 2000 and 2005, was meant to be an informal, low-key affair at the request of the modest author. As fate would have it, and perhaps in some sublime way as recognition of her contribution to the field of art, the event turned out to be a lot more than just a book launch. 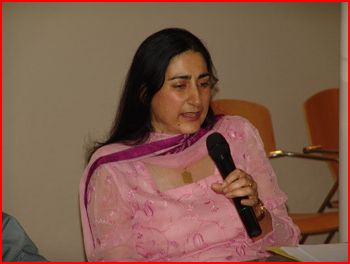 With chairs laid out informally along the walls of the FOMMA Art Centre, rather than in the usual auditorium-seating style, it was obvious from the start of the programme that the evening was going to be different from the norm. Jalal Uddin Ahmed, executive director FOMMA, introduced the author and disclosed how difficult it had been to convince Ali to compile this book. In fact, Ahmed confessed that after he made no headway with the writer, his wife Azra and the publishers FOMMA insisted that they wanted to publish her work, and that’s how it ultimately saw the light of day.

Azra Jalal commended the writer, saying that her writings were an invaluable contribution to the field of fine arts. In an attempt to get the shy writer to say a few words, Ahmed asked her to share what it was about his wife that had made her agree to work on the book when she had refused him earlier. She candidly replied that writers need space and Azra Jalal had the capacity to empathise, giving her the space she needed.

Nighat Mir, director FOMMA Art Centre, accredited the writer’s alma mater, St Joseph’s Convent School, for her writing prowess. She also pointed out that the Art Centre was being run purely on a non-profit basis and was entirely dependent on donations and expressed the hope that more people would come forward with their support in order for them to be able to sustain such activities.

Art critic Niilofur Farrukh stated that such books are the need of the hour and are important reference points regarding the works of artists, for posterity. She rightly pointed out that while there are some ten-odd art critics, who are writing on a weekly basis in various publications, their work is not being preserved and, hence, their impact lasts only as long as the periodical’s shelf life.

Rabia Zuberi, sculptor and principal of the Karachi School of Art, also expressed her deep appreciation for the writer’s contribution to art and commented on the vibrancy of the current art scene. Interestingly, once the floor was opened for comments and questions, the subject deviated from the launch of the book to the formation of a record-keeping body of the works of all artists, in order to prevent forgery, thefts and destruction and to keep abreast of the latest developments in art. Farrukh invited all artists to send in CDs with pictures of their works to FOMMA, so that a record could be maintained. She also offered to devote a page in her art magazine, Nukta, to report any stolen or destroyed art pieces that she is informed about.