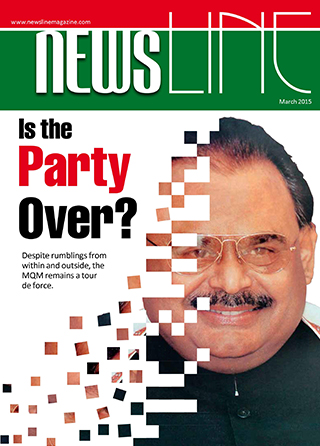 Even without the use of flashy PR campaigns and sprawling billboard advertisements, Bunto Kazmi remains…

Will the Real Muslim League Please Stand Up?

Every now and then, calls are made for the unification of all factions of the…

Basharat Peer is a Kashmiri author and journalist whose book, Curfewed Night won the Crossword…

Back in the late ’70s or early ’80s, I remember standing in an empty room…

The Culture of Silence

When an artist’s lifelong contribution is erased from public memory, the question we need to…

And Then There Were None

Post-Elections 2013, rigging was the issue; as the March 5 Senate elections drew near, it…

The name RekoDiq conjures up an image of a mysterious land, tucked away in a…

Two years ago, I went to see my first art exhibition in Karachi at the…

Politicians should think twice before they use metaphors. When Mufti Mohammed Sayeed described the alliance…

Imagine Benazir Bhutto and Syeda Abida Hussain engrossed in an intimate, nocturnal chat in a…

Pakistan faced a severe petrol shortage during most of January. This was largely due to…

The Emblem of Terror

The government should not attack Lal Masjid. It will create thousands of Lal Masjids throughout…

Hammad Khan’s second feature film, Anima State, is a wondrous potpourri of dreams and other…

Footprints in the Sand

Fragments of memory, objects and artifacts are among the stimuli that serve to evoke the…

The Lahore Literary Festival (LLF) began amidst February showers. However, the real chill set in…

The Karachi Literature Festival has become the cultural event of the year. And again this…

Cover Story: Is the Party Over?

2015 — and once again the MQM finds itself in the crosshairs: the smoke from…

Andrew studies at a prestigious music school and wants to become a jazz drummer. A…

Back in the late ’70s or early ’80s, I remember standing in an empty room above the existing Urology Department of the Civil Hospital in Karachi. The founder of the Sindh Institute of Urology and Transplantation (SIUT), Dr Adib Rizvi, shared with me his dream of building a Urology Centre at the hospital that would provide first class treatment with state-of-the-art facilities and equipment, and well-trained medical personnel. He said these were necessary adjuncts to modern medical treatment. Those were politically tumultuous years, but Dr Rizvi’s perseverance eventually paid off and his dreams have become a reality.

Today, the SIUT is ready to step into the future. Besides offering training and expertise to doctors in robotic surgery, the SIUT will soon be conducting operations using this new methodology.

Robotic surgery is exciting in the new avenues it opens up for surgery. One of its foremost proponents, Dr Prokar Dasgupta, Senior Professor of Robotic Surgery at Guy’s Hospital, London, recently visited the SIUT. At just 48 years of age, his remarkable strides forward clearly indicate his commitment to the expansion of knowledge about this new discipline.

Around for 15 years, robotic surgery is applicable to various medical problems and enables visibly fast recovery of patients, in the process minimising the pain associated with traditional surgery. A distinctly advanced feature is that the surgeon can operate even if he/she is at a distance of many miles from the patient.

At a recent meeting at the SIUT, Dr Dasgupta was keen to engender understanding, through detailed explanations, of the discipline among the medical fraternity in attendance. His visit attracted considerable interest at the institute, with the lecture hall packed, attended by several professors and students. “The common misconception about robotic surgery is that the robot does the operation while the surgeon sits on the side enjoying coffee,” he said. “But this isn’t the case. The robot, technically known as the da Vinci robot, allows the surgeon an extension of his eyes and his hands. It is essentially a computer with a master-slave relation. The surgeon is the master, the robot is the slave. It’s a better way of performing minimally invasive surgery.” In most such surgeries, the surgeon is seated in the same room with his head inside a console from where he controls the robot and can see the screen. His hands are attached to the controls by two small Velcro straps from where he moves the instruments and the camera. It is similar to sitting in the cockpit of an aircraft.

The da Vinci robot is a sophisticated robotic creation designed to expand the surgeon’s capabilities, and offer a state-of-the-art minimally invasive option to major surgery. With da Vinci, small incisions are used to insert miniaturised ‘wristed’ instruments and a

Traditionally, in order to perform an operation the surgeon would make a big cut in the patient. With later developments came keyhole surgery, whereby the surgeon would make small holes through which he/she would put long instruments. The modern day da Vinci robot is manufactured in California and the only one of its kind (although new machines are now coming into the market). But despite its high price , the da Vinci model is proving very popular, especially because it can be used for a variety of surgical operations.

The robot consists of four arms, of which one is a 3D high-definition camera. The advantage is that the image is magnified many times, meaning the surgeon’s vision is much clearer. Before this we would see the surgery on a flat screen, in 2D. But the 3D HD camera gives the surgeon his/her eyes back. “Because vision is magnified, you can see things that you otherwise cannot in traditional open surgery,” explains Dr Dasgupta.

The robot has three other arms which carry instruments, and are like the wrists of a surgeon. They are tiny, just 7mm long, and, importantly, have no tremors in them because the computer filters them all away. The robot’s arms are able to bend, stitch and cut at different angles just like the surgeon’s wrists, unlike straight instruments like a knife. Thus the robot enables the surgeon to do a finer job, as opposed to traditional open surgery.

The steadily rising popularity of minimally invasive robotic surgery has been hailed as a major breakthrough. By minimising the contact time between the instrument and the body’s interior, the risk of infection is also markedly reduced.

Discussing the kind of training required to perform robotic surgery, Dr Dasgupta emphasises that an entire team must be trained, not just the surgeon. “Besides the surgeon, you have to train the nurses, the anaesthetist and the assistants; the entire team around the patient. The training is intensive — you have to learn how to perform keyhole surgery, be able to get inside and outside the body safely, and be able to communicate well with the entire team to ensure that no mistakes are made during the operation,” he explained.

On when robotic surgery is likely to be introduced in Pakistan, Dr Dasgupta says, “I’m told that a few robots are

already being used in general and gall bladder surgery in Pakistan.” But with basic equipment to perform robot surgery costing over two million dollars, he cautions that in order for them to be cost-effective in any developing nation, “the robots have to be used in multiple disciplines, to perform numerous operations, not just in one speciality. General surgery, urology, gynaecology, thyroid surgery, ENT, plastic surgery etc. If you have different teams using the robot on different days then it will be cost-effective. I know that there are aspirations at the SIUT to introduce robotic surgery eventually, when the time is right. And I’m sure that the technology will become cheaper as other competitors’ products become available in the market,” he says. Dr Dasgupta along with his colleagues (Dr Matin Khalid Mehmood Sheriff, who is the founder and director of the Minimally Invasive Surgical Teaching Institute in Kent, and Dr Shamim Khan, who leads the non-muscle invasive bladder cancer programme at Guy’s Hospital) have already been training SIUT staff in this type of minimally invasive surgery over the past year.

Robotic surgery can be used in general, cardiothoracic, gynaecological, gastroenterologic, urologic, colon and rectal surgery, and much more, and has become one of the fastest growing fields of surgery. More and more surgeons around the world are opting to perform surgery with the help of robotic tools. In the US a total of 422,000 robotic surgeries had been carried out up to 2013. With less pain experienced by patients, reduced hospital stay, and minimal scarring, patients usually return to normal life in a matter of days.

The SIUT maintains a first class reputation for surgery and medicare, but as robotic surgery gains increasing popularity, the risks are likely to increase. These include injuries to tissues or organs and internal scarring that can cause long lasting dysfunction, as well as equipment failure and basic human error. In Pakistan, medical malpractice is rarely spoken about. Therefore the popularity of robotic surgery must go hand in hand with the best possible training and surgical expertise.

This article was originally published in Newsline’s March 2015 issue.