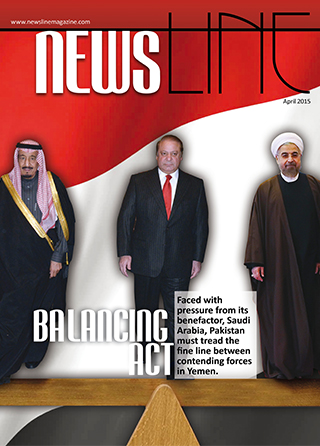 Even without the use of flashy PR campaigns and sprawling billboard advertisements, Bunto Kazmi remains…

Will the Real Muslim League Please Stand Up?

Every now and then, calls are made for the unification of all factions of the…

Basharat Peer is a Kashmiri author and journalist whose book, Curfewed Night won the Crossword…

Back in the late ’70s or early ’80s, I remember standing in an empty room…

The Culture of Silence

When an artist’s lifelong contribution is erased from public memory, the question we need to…

And Then There Were None

Post-Elections 2013, rigging was the issue; as the March 5 Senate elections drew near, it…

The name RekoDiq conjures up an image of a mysterious land, tucked away in a…

Two years ago, I went to see my first art exhibition in Karachi at the…

Politicians should think twice before they use metaphors. When Mufti Mohammed Sayeed described the alliance…

Imagine Benazir Bhutto and Syeda Abida Hussain engrossed in an intimate, nocturnal chat in a…

Pakistan faced a severe petrol shortage during most of January. This was largely due to…

The Emblem of Terror

The government should not attack Lal Masjid. It will create thousands of Lal Masjids throughout…

Hammad Khan’s second feature film, Anima State, is a wondrous potpourri of dreams and other…

Footprints in the Sand

Fragments of memory, objects and artifacts are among the stimuli that serve to evoke the…

The Lahore Literary Festival (LLF) began amidst February showers. However, the real chill set in…

The Karachi Literature Festival has become the cultural event of the year. And again this…

Cover Story: Is the Party Over?

2015 — and once again the MQM finds itself in the crosshairs: the smoke from…

Andrew studies at a prestigious music school and wants to become a jazz drummer. A…

Like R. Balki’s previous films, Cheeni Kum (2007) and Paa (2009), Shamitabh is also very different from the average Bollywood production. There is more to the story than is immediately apparent. The film is apparently about the clash of egos between a speech-impaired young man who dreams of becoming a Bollywood superstar and the man who lends him his voice to achieve that goal. But Shamitabh is actually a metaphor for the film industry in general, and the various power struggles that take place behind drawn curtains.

Amitabh Bachchan plays Amitabh, a drunken drifter, who agrees to give Danish (Dhanush) his voice through the use of live voice transfer technology. The technology allows a person to store someone else’s voice in a make-shift voice box in their larynx, and use it as their own. But Danish hides this truth from the media and public because he thinks it will damage his image. Amitabh, therefore, remains a secret. But when Danish acquires fame and wealth, Amitabh starts to get jealous. “What are you without me?” he asks Danish time and again. “Without my voice, you’re finished,” he says, reminding Danish that it is his unusual voice that sets him apart as an actor. Even Akshara (Akshara Haasan), the assistant director who ‘found’ Danish, helped him get the live voice transfer technology and put him in touch with the director who produced the film that launched him to fame, calls him a “selfish pig” for expecting everyone around him to continue to serve him while he becomes a bigger and bigger star. Shamitabh questions the extent to which the actor is the essence of a film, because without sound effects, make-up, direction and more, the actor is nothing. “If a film cannot be made without audio, then why is it called a ‘picture’, why not ‘mixture’?” Amitabh asks.

Shamitabh also questions the extent to which an actor’s fame is a result of his talents, rather than just luck and coincidence. This is evident in the irony that Danish’s claim to fame is exactly what became Amitabh’s downfall 40 years earlier when he — like Danish — came to Bombay in pursuit of the same dream. Directors told Amitabh that his voice was too deep to play the role of a hero but too weak for a villain, which meant that he was useless as an actor. But it is this very voice that the people fall in love with in Danish.

Luck aside, Balki refers to more sinister things that help launch and maintain careers in Bollywood, like bribery and deceit.  In one scene where Danish and Amitabh are at an awards ceremony, Amitabh launches a tirade on how the award ceremony is “all fixed, it’s all corruption.”

While Further, after an engrossing first half, one had expected an equally creative resolution, but the ending is far too clichÃ©d and overly dramatic. A more realistic one would have proven far more powerful.

The unashamed product placement right at the beginning of Shamitabh is also a big let-down. The film that launches Danish to fame is called ‘Lifebuoy,’ and Danish gets the idea for this film from the soap brand’s theme song run on Indian TV channels. It’s about a hero who saves innocent people from bad guys, just like the soap saves people who use it from germs.

All in all, while Balki’s film is great in terms of the concept, it doesn’t entirely succeed in its execution.

This article was originally published in Newsline’s March 2015 issue.