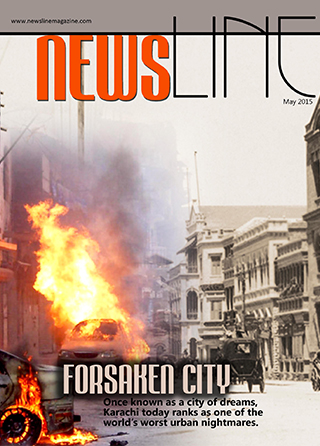 With attention shifting to market response and media hype, we often forget the importance of…

The large room is filled with children of all ages, sitting quietly in reclining chairs……

Letter From India: A Suicide and a Padayatra

In March and in April, when the rains came down and city dwellers in north…

Book Review: Song in his Soul

Song in his Soul is billed as “an autobiographical account” by S.M. Shahid, but it’s…

With the long-standing Kashmir conflict serving as a backdrop for the novel, An Isolated Incident…

The Way We Were

In the month of April, thousands of Hindu devotees travelling from across the country and…

Cover Story: This Land is My Land

The Muttahida Qaumi Movement  (MQM) has its own way of doing politics. Over the years…

Rickety, overcrowded buses with commuters riding on roofs and hanging out of the doors, rickshaws…

Another Year of Promises

The new fiscal year begins on July 1, with budget proceedings starting around the first…

No Country for Shias?

Around this time in 2011, Prince Bandar bin Sultan, the then Secretary General of the…

Banking on the Asian Century

Child 44 is the name of Tom Rob Smith’s international bestseller published in 2008. As…

With Run All Night, director Jaume Collet-Serra and actor Liam Neeson have completed a quasi-trilogy.…

When the Director-General, Sindh Rangers claimed that the violence in Karachi had gone down by…

Sharmeen Obaid-Chinoy Films’ latest venture is a computer-animated feature film in collaboration with ARY Films, produced entirely in Pakistan. 3 Bahadur is about three 11-year-olds who use their superpowers to banish the evil Mangu from their hometown.

For those of us who grew up amid the Harry Potter craze, the characters and plot in 3 Bahadur will seem all too familiar. Saadi, like Harry, is the sensitive, brooding one whose past is mysteriously connected to Mangu’s; Kamil, like Ron, is the goofy one who is always worried about his stomach; and Amna, like Hermoine, is smart but fiery, always keeping a level head and usually the one to come up with a plan of escape. The trio is up against an extraordinarily evil man who, much like the villain in Harry Potter, seeks unlimited evil power.

However, 3 Bahadur gives this plot a refreshing Pakistani makeover: Mangu’s hideout is a tower that looks strikingly similar to Karachi’s Merewether Clock Tower; Kamil’s father runs a dhaba; the townspeople are mostly dressed in shalwar kameez; there’s an “aunty” who thinks it’s her God-given right to break queues, and another who ironically berates a man for getting in her way as she throws trash where it is expressly forbidden to do so. This is what makes the film so relatable, for adults and children alike.

But the best part about this film is that it offers a ‘child-friendly’ version of current affairs in Pakistan. There is one scene in which the bad guys are talking about Mangu’s clever plan of turning off the water supply in Andhairpur only to siphon it all off into his tankers and sell it at exorbitant rates in a nearby locality. This is precisely the reality of Karachi’s ongoing water crisis: residents rely on water tankers that are actually selling water from the main supply line at exceedingly high prices. The thugs then reveal another truth about tyrannical rulers: “If you keep people entangled in the small things, like water and electricity problems, they won’t question the greater injustices.”

Abounding with such intellectually stimulating gems, it is therefore surprising that the makers of the film found it necessary to label what is clearly a packet of crisps with the word ‘crisps,’ and what is unmistakably a bar of chocolate with the word ‘chocolate.’ This, along with the blatant product placement (a characteristic across Pakistan’s film and drama industry), takes from the film’s appeal. Store shutters and walls in Andhairpur are painted with the logos of Safeguard soap and Rio and Gluco biscuits, the film’s sponsors.

More importantly, the film might be too dark for younger children. There is evil magic, a bad guy whose eyes and body are made of fire, allusions to murder and torture, and guns and knives are openly displayed. While all this is a reality in Pakistan, especially Karachi, is it wise to expose small children to this reality so brusquely? 3 Bahadur also has the classic Disney trademark — the single-parent family. All three heroes have just one parent (even though Kamil mentions his mother, she is nowhere to be seen). The suggestion is of death or divorce, traumatic to children at any age.

The animation — which is the film’s main brag — is very Shrek-like in the beginning. And unlike most cartoons produced in Pakistan, the characters in 3 Bahadur are able to demonstrate a wide range of expressions, their lips actually form the words they utter, and the movement of their bodies is mostly natural.

The film has great lessons for children: speak up against what is wrong, establish trust in your communities, be united in the face of adversity, and intelligent in the choices you make. This is important for Pakistan’s youth if they are to banish crime, intolerance and dishonesty that has become our national identity.

But far more interesting is the way the film depicts a role reversal between adults and children. The fact that three 11-year-olds take it upon themselves to get rid of the town’s biggest criminal — while all the adults literally cower behind them — is unnatural, but a sad reality of our world today. Consider how a colouring book for adults has become a bestseller on Amazon.com; how a constituency in Scotland recently elected a 20-year-old to the UK Parliament; and, far more seriously, how children took the brunt of an adult’s war during the December 16 massacre at the Army Public School in Peshawar. While Kamil, Saadi and Amna’s battle against Mangu is great fun to watch, the truth is that they will probably suffer from anxiety and post-traumatic stress disorder because they are forced to carry a burden that is too heavy for their young shoulders.