The top brass of General Headquarters in Rawalpindi, the heart of the Pakistan Army, is…

A frequently asked question in Pakistan these days is whether we have any government. The…

During the previous edition of the Olympic Games in Athens, I met with Pakistan’s sports…

In February 1990, an Afrikaner teenager was in the swimming pool when her father emerged…

Upon entering Unicorn Gallery, at the opening of the photography exhibition titled ‘Of Space and…

Can Pakistan Survive? Yes, if…

Tariq Ali was not the first one to pose the question, “Can Pakistan survive?” when…

Sixty-one years old this August, Pakistan is still confined in the cradle of its confusion…

Q: PML-Q information secretary Tariq Azeem maintains that your expulsion from the parliamentary party is…

Ahmed Rashid is, arguably, the most famous journalist-scholar from Pakistan because of his books on…

The Magic of Mir’s Line

An intelligent interplay of geometric severity and organic pliancy, ‘Dimensions of the Illimitable’ by Imran…

The Rise and Fall of Lollywood

Shuja Nawaz’s latest book on the Pakistan Army is an exciting read that could turn defence analysts, like myself, green with envy for not having the kind of contacts within the country’s armed forces that would open up a wealth of information. The prose flows smoothly as the writer takes us through the journey of the development of the army from the colonial times to the most current period. 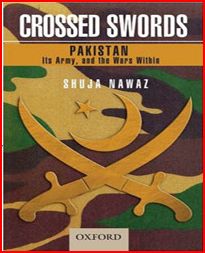 Spread over 606 pages with 18 chapters, the book tries to decipher the reasons behind the power and influence of the military, and its relations with the political forces, the US and the mullahs. These are the three critical areas that have been covered by several academics in various works. One of the important questions which the writer asks is whether Pakistan’s military is like the Turkish military, which is engaged in nation-building, or the Indonesian military which is predatory. Although one of Nawaz’s recommendations is that the military must shed its commercial role, he appears quite gentle in analysing the military’s role and its professional capacity.

Considering the kind of access the author had to military archives and sources, the book is extremely revealing in terms of information. For the first time it has been revealed that Liaquat Ali Khan was “sold on” the idea of Ayub Khan as the army chief (page 80). We know for sure now how Major General Akbar Khan planned the 1947/48 military operation in Indian-administered Kashmir with the help of tribal warriors, which led to the first war with India. Then there is information about how Iskander Mirza, Ghulam Mohammad, Ayub Khan and Pakistan’s ambassador to the US, Amjad Ali, were all independently trying to build relations with the US. How there were ethnic tensions in the army during the early days, with officers suspicious of those whose families had migrated from India. How Ayub Khan created a system of perks and privileges for the officers, which was opposed by some officers such as Sher Ali Pataudi. We also learn that Ayub Khan imposed the first martial law after he heard rumours about himself, spread by politicians, that he was paid off by the Indians during his November 1953 trip to the US. Also, that Bhutto and General Akhtar Malik influenced Ayub Khan to launch ‘Operation Gibraltar’ that led to the 1965 war.

We are informed that while Ayub Khan wanted to solve the Kashmir issue for good when he went for talks with the Indians, it was Bhutto who was dragging his feet. And that Yahya Khan wanted to rule for 14 years so that the country did not fall into the hands of ‘wolves.’ The other revealing information pertains to how the ISI bribed politicians like Jatoi, Junejo, Pir Pagaro, Hafeez Pirzada, and Jam Sadiq to topple Benazir Bhutto’s first government. We also learn that the Sharif brothers bribed senior military officers with BMWs and blackmailed Begum Abida Hussain after she had taken money from them to pay off her political opponent.

The author very systematically explains the evolution of Pakistan-US relations. In fact, these details are interesting, as the book seems to be addressing two types of audiences: the Pakistan Army and the US. According to Nawaz, Ayub Khan established links with the US. The details on the bilateral relations are worth reading. However, he fails to mention how Jinnah was equally keen to develop these relations to get weapons and material help to build the country against India.

Indubitably, the book is explosive in terms of the new material it provides. Nevertheless, there are a few issues which one would like to raise with the author. Before one embarks on that, it is important to slot the book in the right category. The existing literature on civil-military relations in Pakistan, its politics and the military falls into three categories: (a) sympathetic to the army, (b) critical of the army and (c) that which views the issue from a structural paradigm. Although Shuja Nawaz’s book has sufficient potential to fall in the third, it actually belongs to the first category. The author is critical of generals Yahya Khan and Zia-ul-Haq, but sympathetic to the views of generals Ayub Khan, Mirza Aslam Beg, Asif Nawaz, Waheed Kakar, Jahangir Karamat and Pervez Musharraf. In fact, he completely ignores the information that Ayub Khan had received a bad ACR (Assign Channel Reassignment) from his bosses prior to the partition of India and had become a general through machination.

While Nawaz points out the flaws of the Yahya Khan regime, especially how it suffered from centralised decision-making and how it launched an unwise military operation in East Pakistan, his narrative almost justifies the military action during the 1950s. While pinpointing how various civilians were inept in handling the state, he fails to link the political problems during the country’s early years with the birth of the state. Since Pakistan was born as an elitist state, it was natural for the political elite to behave irresponsibly and for the state to turn into a rentier one. He does not necessarily see the relations with the US as part of the rent-seeking culture of the elite or the state. Furthermore, the author distinguishes between the ‘irresponsible’ politicians and the generals, while both belong to the category of the rent-seeking elite of the country.

Another issue, which one would like to raise with the author, pertains to his assessment of the military as a professional organisation. He continues to refer to it as professional, but admits that the generals have made mistakes and behaved irresponsibly. At several places Nawaz points out how the military’s professionalism was compromised. Professionalism is, indeed, a subjective issue. Does one link it with the level of training as compared to that of less trained militaries, or the passion of the soldiers to attain tactical objectives, or the ability of its generals to attain strategic objectives? Interestingly, the author does not analyse the Kargil crisis critically or note down the fact that it was not just due to the folly of Nawaz Sharif that Pakistan was compelled to withdraw but the fact that the army’s line of communication with its troops was severed during the operation, which allowed the Indians to regain ground. Moreover, what can one say about the professionalism of an army that allows militants to penetrate its rank and file?

Another questionable issue pertains to his assessment of the army as having no links with the Islamists and it being a secular institution. This analysis runs counter to some of the details given in the book. Perhaps, if Nawaz had looked carefully he might have been able to see that the army’s fundamental flaw lies in its links with the tribal warriors and militants, whom they view as the most potent tool against India. It really does not matter if the bulk of the army interacts with the militants or not, the fact remains that militancy is part of the larger strategic design and militants have penetrated certain critical segments of the organisation. In fact, Nawaz notes that the ISI was responsible for supporting the jihad in Kashmir. But alongside, the author also tries to build a case that the Taliban were not created by Pakistan’s ISI. However, his knack for details does not include information as to how the Taliban managed to launch an organised offensive in Afghanistan, which smacked of professional help.

More importantly, the author fails to note that Pakistan’s politically ambitious army’s links with Islamists and their religious ideology are as strong as those of politicians due to the problem of legitimacy. The army does not have any political base and the Islamists have served as their constituency in the past.

Although Nawaz discusses the problem of the military’s system of perks and privileges, he classifies it as part of the larger problem of entitlement. One wonders if the problem didn’t merit greater attention.

Reading the book, one is reminded of the philosophy of Pakistan’s strategic analyst Hassan Askari-Rizvi, who is of the opinion that one must keep a distance from the generals to arrive at an unbiased opinion. The bulk of the information, which makes Shuja’s book such an interesting read, obviously came at a cost.