Convicted child-killer Shafqat Hussain got another lease of life when his execution, scheduled for June…

Abraham Lincoln once said, “You can fool all the people some of the time, and…

With its tall mountains, thick pine forests, lush green plains, and the numerous arteries of…

Local elections will take place in Sindh and Punjab on  September 30, 2015. The exercise…

The late Ahmad Ali Khan, the longest-serving editor of Dawn, was known to be a…

This book is of special relevance for readers in Pakistan for three reasons. First, because…

All Show, No Go

The well-documented support of Lal Masjid cleric, Abdul Aziz, and Jamia Hafsa students for the…

Was the United Baloch Army (UBA) behind the massacre of 20 Pashtuns in Mastung? According…

Karachi is a ‘love it or hate it… no half-measures’ kind of a city. It…

Bruno Anthony has a theory: if two men murder two strangers, the murderers can never…

Once a name familiar only to teenagers and those hooked onto Pakistani music channels, Mahira…

Walking through the exhibit, ‘A Flower in Every Meadow: Design and Innovation in Pakistan’s Dress…

The sizzling heat of June remained somnolent, giving no respite while we drove to Mandew,…

Once a name familiar only to teenagers and those hooked onto Pakistani music channels, Mahira Khan is now a household name.

Humsafar, a Hum TV serial, catapulted Khan to fame. Shehr-e-Zaat and Sadqe Tumhare followed. And now she is about to hit the big screen in a big way. Her first, Shoaib Mansoor’s Bol, saw her in a small role opposite Atif Aslam. But her next three films, Momina Duraid’s Bin Roye opposite Humayun Saeed, Asim Raza’s Ho Mann Jahan with Sheheryar Munawar and Adeel Hussain, and Rahul Dholakia’s Raees, alongside Bollywood bigwig Shah Rukh Khan, may very well set the stage for this incredibly talented  actor, both here and in Bollywood.

While Mahira has been very forthcoming about her upcoming Pakistani films, she remains extremely tight-lipped about Raees and her Bollywood experience, except of course for her tweets about being incredibly nervous and experiencing sleepless nights when shooting with SRK, and a detailed interview with NDTV (alas, local media always gets short shrift).

In this email interview with Newsline, Mahira talks about her transition from the small screen to the big screen.

Two of the movies you’ve starred in are set to release this year, and a third is in the pipeline. How varied are the characters you play in Bin Roye, Ho Mann Jahan and Raees? What do you bring to each role personally? Which character can you relate to more as a person?

Very varied. Saba (Bin Roye) is a young girl who is in love, she is stubborn and brash. I would say she has shades of grey, but she is more human than a lot of characters that I have read. It was difficult to play Saba; I didn’t fully relate to her. Also, if the audience doesn’t feel her pain, the whole story could go the other way — and I think that was the hardest part. I had to play her as honestly as possible.

Manizeh (Ho Mann Jahan), on the other hand, is a mature girl who knows what she wants. She is like a rock, she is also calm. I would love to be more like Manizeh, actually. She is comfortable in her own skin, also very passionate about the things she loves or the people in her life. For Manizeh, I had to become less rigid in my way of talking or even small things like walking. She had to hold her own, even if she was sitting at a dhaaba with a bunch of boys.

From the small screen to the big screen, how was the transition? Were there any awkward moments?

I guess only when it came to singing and dancing on screen did I feel the ‘transition.’  Otherwise, I think I’ll realise the awkward moments only when I see myself on screen. But I hope not!.

Now that you’ve experienced both TV and film, what would you say is your preferred medium?

I like acting… I’m happy doing that in any medium!

Are Pakistani TV plays as big in India as is being reported? And do Fawad Khan and Ali Zafar have a sizeable fan following? Were you also recognised on the streets of Mumbai?

Absolutely. I don’t have to tell you that, you can look online. Not just in India, world over people love our TV shows. And Fawad and Ali are very popular. Yes, I was recognised, but definitely not the way I am back home.

Bin Roye releases this Eid. Do you see it reigniting the magic of Humsafar?

Humsafar is Humsafar!  None of us planned Humsafar to be what it turned out to be. I don’t think magic can be planned. That said, I do hope Bin Roye can create its own magic! 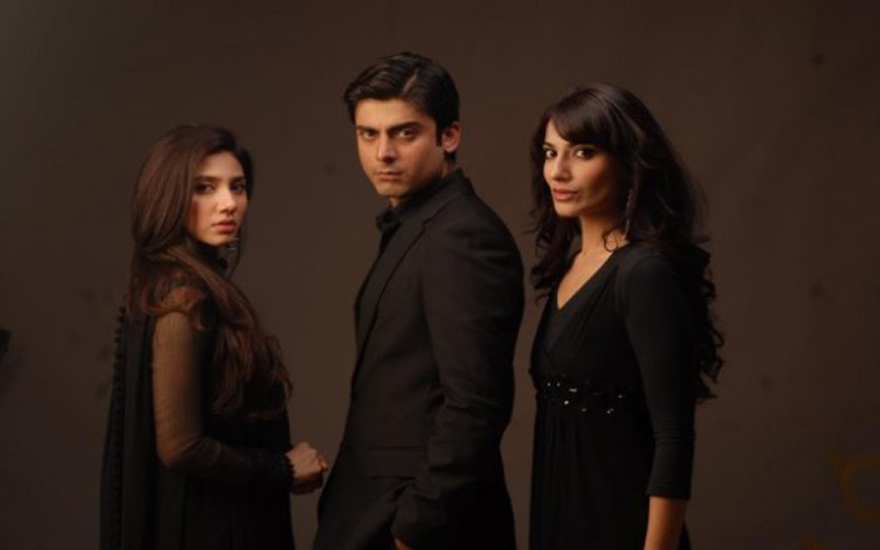 Mahira Khan with Fawad Khan and Naveen Waqar in ‘Humsafar.’

Would you like to break out of the ‘good girl’ mould you often play?

I have played very strong female leads. I don’t know why we categorise roles as good or evil. Yes, I have never played the quientessential ‘villian,’ but that is purely because I have never been offered a negative character. I would love to explore different roles, which at the moment, I feel, is in my capacity!

Is there any character you would like to play?

I’d like to dabble in comedy if I get a chance. Character-wise, I’ve never really had a dream role, so to say.

Like Fawad Khan, are you, too, uncomfortable doing romantic scenes?

Oh, I can be very uncomfortable doing romantic scenes; it’s just that we aren’t used to physical proximity in our dramas. But, at the same time, I love romantic scripts. Honestly speaking, as long as I am enjoying playing a character, I don’t feel uncomfortable doing anything. I have put keechar (mud) on my face, screamed at the top of my lungs and so on.

Have you had a mentor through the whole process of acting? Or did you figure it all out on your own?

Well, I’ve never had a mentor as such, but it would be wrong to say that I figured it all out on my own. Be it Shoaib Mansoor, Mehreen Jabbar, Sarmad Khoosat, Asim Raza, Momina Duraid, Haissam Hussain, Ehtesham, Rahul Dholakia, be it my co-actors, even people who have been part of my VJ days — and trust me when I say this — each and every one of them has contributed to what I know today. I could literally list down the things I have learnt from each of these individuals.

I need to bond with my director.  I love it when my director knows the character inside out. Every director is different. Some like to leave actors to decipher their own characters, some guide you completely… but it’s always a combination of the two.

Do you have what it takes to be a successful Bollywood actor, thumkas et al?

Haha! I don’t know what it takes to be a successful actor, Bollywood or anywhere else. I just want to be able to explore my craft, play varied roles and hope that I can be successful doing so.