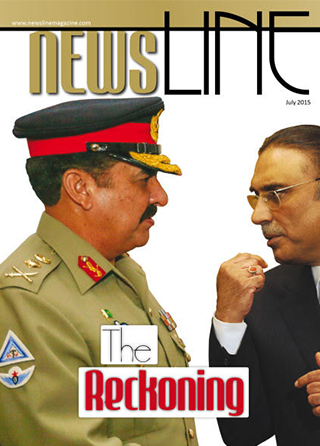 Convicted child-killer Shafqat Hussain got another lease of life when his execution, scheduled for June…

Abraham Lincoln once said, “You can fool all the people some of the time, and…

With its tall mountains, thick pine forests, lush green plains, and the numerous arteries of…

Local elections will take place in Sindh and Punjab on  September 30, 2015. The exercise…

The late Ahmad Ali Khan, the longest-serving editor of Dawn, was known to be a…

This book is of special relevance for readers in Pakistan for three reasons. First, because…

All Show, No Go

The well-documented support of Lal Masjid cleric, Abdul Aziz, and Jamia Hafsa students for the…

Was the United Baloch Army (UBA) behind the massacre of 20 Pashtuns in Mastung? According…

Karachi is a ‘love it or hate it… no half-measures’ kind of a city. It…

Bruno Anthony has a theory: if two men murder two strangers, the murderers can never…

Once a name familiar only to teenagers and those hooked onto Pakistani music channels, Mahira…

Walking through the exhibit, ‘A Flower in Every Meadow: Design and Innovation in Pakistan’s Dress…

The sizzling heat of June remained somnolent, giving no respite while we drove to Mandew,…

This book is of special relevance for readers in Pakistan for three reasons. First, because it chronicles with dates and details how the Indian State, our most difficult neighbour, has attempted with substantial effort, yet limited success, to adapt its constituent state-units (provinces) to its vast ethnic and cultural diversity. Second, because it is a compact, handy source of information on this subject for Pakistan, where knowledge about India is mainly confined to a broad awareness of the northern Hindi-speaking parts (and Bollywood trivia), whereas this book provides considerable detail about south India and North-East India. Third, because both India and Pakistan are part of an unfolding era in regional and global history when established state frontiers are being breached or facing threat from various sources including ethnic and cultural forces.

The author is an assistant professor of Political Science at St Xavier’s College, Kolkatta. The principal part of the book is the text of her doctoral thesis. A thesis is a good starting point for a book. But further research and reflection is required  before it can become a fulsome book for the specialist and general reader. Further, at critical points, the national identity of the author appears to prevent an impartial and objective assessment of major failures in India to effectively address the intricate  demands of diversity. Lastly, there are basic lapses of syntax and textual construction. Neither the author nor the book’s editors have paid necessary attention to these details before going into print.

The book serves as a wide-ranging, but incomplete, catalogue of the trends, actions, phases and personalities that are relevant to the history and progression of conflict resolution in a multi-cultural society such as India. For example, it does not go far enough to present the views and perceptions of India’s largest religious minority, the Muslims, with their own wide-ranging cultural diversities located in geographically distant areas ranging from Kerala to Kashmir, and in conflict with the  Hindu majority, on their rights to equitable power-sharing .  This absence is notable because the text does refer to the ironic problem in general wherein a solution for a  Hindu  (linguistic) majority can still leave unresolved another  Hindu (linguistic) minority’s concerns.  Thus, both in the pre-Independence and the post-Independence phase, the Indian Muslim quest for credible participatory  political structures and outcomes is not dwelt upon.

One indicator of this curious oversight is the fact that neither the Muslim League nor Mohammad Ali Jinnah are even minimally covered or listed in the Index. Almost inadvertently though, the text highlights how similar the views of both Jawaharlal Nehru and Mohammad Ali Jinnah were, immediately after Independence, on the need to avoid making language the basis for provincial identity-assertion .

In the Quaid-i-Azam’s speech on March 24, 1948, at the Dhaka University Convocation, he declared that, while Bengali should be “.. the official language of the province (East Pakistan)…,” only Urdu could be the (sole) state language for communication between all provinces. This is rightly cited as the origin of the alienation of Bengali East Pakistanis from the  Pakistani state. What is not equally cited are the other parts of the same speech in which Jinnah stressed that grave dangers threatened the unity and stability of a new nation-state precariously created with two wings separated by 1,000 miles of hostile territory. He emphasised that anti-Pakistan elements were deliberately using the language issue to foment the destabilisation of Pakistan.

Though there is no mention  of this aspect in the book, on pages 40-42, the text cites how Nehru, post-1947, reversed his earlier position in the 1920s/30s on language being the basis for state (province) formation. Excerpts from remarks made in Parliament in 1947, 1952  and 1956, reveal that the first prime minister of India repeatedly warned against letting the language question threaten the unity and integrity of a newly-independent India by making language the basis for sub-division. He was supported by the Linguistic Provinces Commission established by the Constituent Assembly in June 1948. The Commission  recommended that the linguistic issue should  be recognised “only when Indian nationalism has been sufficiently strengthened.” It is another matter that post 1953-1956, the Indian Union  began to change its approach, spurred by the alarming demand for secession by Dravidian Tamils. This change in approach represented our neighbour’s admirable capacity to be flexible rather than rigid. So that today in 2015, there are 29 states (provinces) in India, whereas there were only 14 in August 1947.

Pakistan, meanwhile, remains the world’s most asymmetrical federation with only four provinces for over 180 million people. Even the 18th Amendment, which introduced unprecedented devolution,  does not fully address the issue of cultural, ethnic and linguistic diversity that will require re-structuring.

Multiple methods were used in India  to deal with conflicts. These included the re-organisation of states (provinces) on a linguistic basis; formation of autonomous district councils; devolution of powers to local levels; and the formal affirmation of equal rights for all inhabitants, this last feature being of particular relevance in caste-based social practices.

At several points, the author commendably admits failures and shortcomings in India’s approach to the complex and daunting challenge of internal re-organisation. Yet, in  four respects (Hyderabad, Sikkim, Goa, Kashmir), there is virtually no reference whatsoever to coercive, even brutal, aggression by the central Indian system to alter and distort historic continuities and realities of people and areas shaped by culture, religion, race and region. Take the case of the two largest princely states forcibly moved into the Union: Hyderabad Deccan and Kashmir. Notwithstanding the anomaly of Hyderabad, where the Nizam was the Muslim ruler of a mainly (about 80 per cent) Hindu population, there was a distinctly pluralist Deccan cultural milieu, historically evolved, largely harmonious and autonomous. But the unavoidable recognition of the Hindu and Telugu dimensions of Hyderabad was also used, after military invasion and occupation (misleadingly named ‘police action’) to conduct a systematic cultural de-construction of this extraordinary entity. The attempted decimation of Hyderabadi cultural identity was reinforced by the re-distribution of the original territory into Maharashtra, Karnataka and Andhra Pradesh .

Annexation by sheer military force of Sikkim and Goa is misrepresented as the granting of the status of states to these areas .

In Kashmir’s case, the author has not dealt with the enormous pain and oppression to which the people of Indian-administered Kashmir have been subjected. Initially, from 1947 to 1989; thereafter, to date in 2015, made worse by a huge concentration of military troops. And the tragic loss of lives of tens of thousands of Kashmiris. Despite the existence of a provincial  legislature and periodic elections, the basic conflict has not been resolved, de-centralisation of power from New Delhi to Srinagar is illusory and there is neither true political autonomy nor acknowledgement of Kashmiriyat as a cultural reality. To rub salt in the wound  (page 22), while entirely ignoring the internationally-disputed dimension of Kashmir, the area is misleadingly lumped together with other linguistic entities such as Oriya and Assam which were given state (province) status in 1956 on the basis of language. The fact is that the contrived grant of a provincial status to Kashmir within India was a militarily-enforced  political arrangement in violation of UN Security Council resolutions. It was not a recognition of Kashmir’s exclusive and separate cultural and ethnic identity, even after noting Article 370 of the Indian Constitution that gives Kashmir a special status.

In contrast to such unintended, or deliberate, omissions, the book devotes substantial attention to the tribal complexities and cultural challenges that compound the process of autonomy and empowerment in the seven North Eastern States of Assam, Nagaland, Mizoram, Meghalaya, Arunachal Pradesh, Manipur and Tripura. Several initiatives to acknowledge indigenous identities and to deal with ethnic minorities both from within India and from Bangladesh, which also reside in some or all of these seven states, have been unable to ensure sustained stability. The Indian Army maintains a strong presence to enforce the Union’s writ but continues to face recurrent tensions. The region has produced the world’s longest hunger striker: the incredible Irom Chanu Sharmila, born in 1972, who began her hunger strike in November 2000 to protest the killing of 10 local citizens (including her brother) in Malom, Manipur by the Assam Rifles. Despite being arrested for attempted suicide, force-fed, released, re-arrested, her phenomenal endurance on the tortuous force-feeding alone, continued for over 14 years. She became a symbol of  how the fundamental roots of conflict in that region have not been fully resolved.

One major aspect of internal conflict has not been analysed. This is the Naxalite Maoist insurgency. Commencing from the small village of Naxalbari in West Bengal in 1962, and persisting through uninterrupted democracy as in the holding of regular elections since 1947, the insurgency that totally rejects the supra-model of the Indian State and remains unsatisfied with the formation of new states (provinces) spread to almost 200 districts. Is this not a gross failure in conflict resolution in spite of re-construction of structures?

On pages 35-36, there is a reference to the view that religion alone, as in the case of West and East Pakistan in the 1947-1971 phase, was unable to sustain unity. But the reference does not go further to note that post-1971, Bangladesh shows no desire to merge with West Bengal with which it broadly shares linguistic, cultural and historical commonalities. Thus, the birth of Bangladesh was more a rejection of the state  structure of Pakistan rather than a rejection of religion, per se, as a basis for unity.

While considerable research has obviously been conducted, the overall view of the book that emerges on completing its reading is that it is not comprehensive or balanced enough.

Regrettably, there are several, recurrent errors of syntax, language and proof-reading. One error is a favourite in South Asian English, specially in journalism, but not acceptable in a scholar’s book. This is the use of “although” and “however” or “yet” in a single sentence. The use of the singular term where a plural should have been used. “Parity” instead of “disparity,” which therefore conveys the opposite of the intended meaning. As many as 100 words in a single sentence (paragraph three of the Preface). And so on.

The book seeks to portray the formidable challenges faced by India and how, in many instances, a positive, accommodative perspective evolved. A thoughtful concluding chapter contains some constructive observations.  In further editions, the author and the publishers should rectify the flaws in syntax and grammar, and other omissions which detract from a well-intentioned, pertinent book.

This review was originally published in Newsline’s July 2015 issue.