The Tribes Fight Back

The Mullagori tribe is small and weak compared to other Pashtun tribes, such as the…

NWFP governor, Owais Ghani, during a visit to Lahore on September 22, revealed that the…

“It is a tragedy that nothing seems to matter — no signature, no oath. It…

On the Paper Trail

Once a most unlikely medium for sculpture, paper — whether recycled, industrially manufactured, or handmade…

Of Frappes and Mochaccinos

From Coffee, Tea & Company to Gloria Jean, to Masoom’s to Jammin’ Java, to Dunkin…

The residents of the once quiet and peaceful city of Islamabad are now used to bomb blasts in their city. Despite this, when I heard a loud blast on 9/20, I hoped it was thunder. I was wrong. Soon, all the news channels on TV broke the news about the blast in front of the Marriott Hotel. I rushed to the site out of curiosity and sheer habit. Although a police vehicle stopped me about a kilometre away from the hotel, I managed to argue my way through and could hardly believe what I saw on approaching the hotel. The impact, sadly, was far greater than I had imagined.

Branches and leaves were scattered all over the place. Once I reached the Aga Khan Road in front of the hotel, I came across a line of cars that had been reduced to steel skeletons by the intensity of the blast. About 20 ambulances belonging to various hospitals in Islamabad, Rescue 1122 and Edhi, had lined up to rescue the victims. But despite the presence of a large number of police personnel, the endless flow of ambulances and vehicles belonging to various TV channels caused a massive traffic jam.

Amidst all the chaos, it remained unclear as to where one was supposed to shift the injured or the dead bodies as the long convoy of ambulances stood immobile. If you opted for the closest one, the ambulance was unable to leave immediately because of the traffic quagmire. And if you opted for the one towards the front end, then it would obviously take some time for rescue workers to reach it. I know this was a major problem since I carried two persons, one dead and another injured, and believe me, it wasn’t easy. There was no one present to guide the people who were carrying the stretchers, to the ambulance. There was a free for all.

Police was in abundance but nobody seemed to be in charge. I could not see a single senior officer supervising the situation, directing the rescue workers or even trying to control the traffic jam. Apart from the ambulances and police cars, there was only one fire engine, which was perhaps the strangest and saddest part. The blast had just taken place and only a couple of the hotel rooms were on fire at that point. A German who was on the ground floor in the hotel gym at the time of the blast, made the mistake of rushing to his room to collect all his belongings. But by the time he packed, it was too late and he had to jump from his room’s window to save himself. The fact that he had enough time to get to his room from the gym shows that the hotel didn’t immediately catch fire. And the talk about the explosives carrying aluminium powder that instantly caught fire, making it difficult to extinguish, sounds like an eyewash just to cover up the inefficiency of the fire brigade.

The sole fire engine standing close to the site of the blast looked like a monument from a museum rather than one that belonged to the capital’s fire brigade. The other fire engines started to arrive about an hour after the blast and it took them a long time to even get close to the building. One could immediately discern that the firefighters were disorganised and were not rushing to the rescue, unlike the volunteers who were attending to the injured. They were walking around, carrying coiled pipe hoses on their shoulders as the fire spread alarmingly to the front of the building. Turns out that they couldn’t do much because the fire engines were out of water and they didn’t have back-up water tankers. The firefighters were seen standing helplessly, waiting for the water tankers to arrive.

I managed to get inside the hotel’s ground floor to look for injured people. Luckily, there were none and I noticed that all the sprinklers, on this particular floor, were working impressively and this is perhaps the sole reason that this floor was saved. I went towards the back of the hotel, near the pool, and was saved by two men who shouted, asking me to move. I ran and within seconds, something from the back of the building fell to the ground. The back of the hotel building had also caught fire. And yet, there was not a single firefighter in sight.

It was only after about three hours that a snorkel, with a ladder long enough to reach the top floor of the building, arrived. But it was too late by then. The fire had consumed almost every flammable and combustible item in the building. I noticed that the ladder worked wonders since the firefighters could now easily reach the top of the building, extinguishing the fire within minutes. 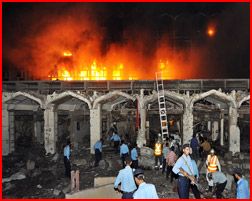 There is little doubt that if Islamabad’s fire brigade had reached on time, at least the hotel could have been saved from catching fire. Islamabad is the only city in Pakistan without a local government and it is altogether a different issue as to why General Musharraf’s regime failed to introduce the system of decentralisation in the capital, since it worked well in other cities. As a consequence, the Capital Development Authority (CDA) remains in charge of disaster management, including the fire fighting system.

The capital’s fire brigade had confronted a similar emergency situation in 2002, when the Shaheed-e-Millat Secretariat on Jinnah Avenue caught fire. One may find it hard to believe, but initially the firefighters kept trying to extinguish the fire on the first three or four floors, and then decided that they had no option but to let the fire consume everything on the remaining top floors. They lacked the equipment needed to reach the upper portion of the Secretariat.

After the Shaheed-e-Millat fire, the government decided to upgrade the firefighting wherewithal. In 2005, a Rs.650 million contract was awarded for upgrading and improving the Islamabad Fire Brigade, which included new fire tenders, two snorkels with the maximum height attainability of 232 feet, other necessary equipment, and the recruitment of staff and their training.

Consequently, the Islamabad Fire Brigade now has a staff of nearly 500 people, 16 fire engines and two snorkels. At the time of the Marriott blast, however, as luck would have it, one of the snorkels was not in working condition and was undergoing repairs, while the other reached the hotel quite late. Even after the snorkel reached the site, the staff was unable find parking space to enable it to reach the building from the front. As a result, it was deployed in the parking lot, on the other side of the building, and could only help in extinguishing the fire on that one side.

The Islamabad Fire Brigade faltered badly at a crucial time, and it blames the traffic jam in front of the building, the Sui Northern Gas Pipelines Limited (SNGPL) and the Islamabad Electricity Supply Corporation (IESCO) for failing to respond to the emergency situation. According to the city’s fire brigade, the teams of the two utility companies arrived 90 minutes after the incident to cut off the main supply of gas and electricity to prevent the fire from spreading. It also claims that 250 of its staff members were involved in extinguishing the fire, but encountered immense difficulties due to the continuous supply of electricity and gas to the hotel. They say that the situation became even more challenging after the electricity supply was cut off, as the hotel generators became operational automatically.

The irony in this whole unfortunate incident is the role of the Disaster Management Authority, which sits in the comfortable environment of the Prime Minister’s Secretariat. This Authority was established through the National Disaster Management Ordinance 2006 (No. XL) in December 2006. Despite the lapse of almost 22 months, the previous government and now the present PPP-led regime have not been able to give the Ordinance the shape of an Act passed by Parliament. Ordinances lapse every four months, and the Authority was kept alive by regularly re-issuing this Ordinance. It was promulgated on October 3, 2007 the last time, through Ordinance number LIII and is now being given protection under the PCO, that was issued during the Emergency imposed by former president, General Musharraf.

The blast at the Marriott comes within the purview of the Authority, as the definition of disaster in its parent law covers man-made catastrophe, or a calamity, which results in a substantial loss of life or human suffering or damage, and destruction of property. The law talks about the formation of a National Disaster Management Commission, chaired by the prime minister, and includes leaders from the opposition in the Senate, National Assembly, ministers for interior, defence, communications, finance, governor of the Frontier province, prime minister of AJK, the four chief ministers and the chief executive of the Northern Areas and chairman JSCC or his nominee. A National Disaster Management Authority is to be notified soon after the formation of the above commission, which is presently headed by Lt General Farooq Ahmad Khan

It remains unclear as to why a National Commission and an Authority was established for the exact same purpose. In any event, both have the responsibility for laying down the policies, plans and guidelines for disaster management. The law also talks about the formation of such authorities at the provincial and district levels. But here’s the problem: nobody knows about the policies, plans and guidelines for controlling such disasters, even though the Commission and the Authority have been in existence for almost two years.

On September 20 at the Marriott Hotel, there was no plan and no guidelines for rescue workers. There was nobody to take charge and supervise the overall operation. The traffic jam, mainly caused due to a plethora of news channel vehicles parked in front of the blast site, prevented the fire engines from being able to find parking space. The electric and gas supply was discontinued after inexcusable delays, all of which contributed to the spreading of the fire. Prompt action needs to be taken by the present government in order to prevent such chaos in situations of emergency.