In the Name of Democracy

All martial laws are meant to seize power and to dislodge the incumbent. But not…

It’s a contradiction in terms. General Musharraf saysthat he’s in the third phase of his…

Fuel to the Fire

It was an impossible situation to secure. With the flight landing late, everything was behind…

A 15-year veteran in the Pakistani fashion industry, Nudrat Shahid says that saris have made…

Lord of the Arts

It is not batsmen and bowlers, but Pakistani art that will be attracting crowds to…

Some of the most inspiring books, plays, television shows and movies from around the world…

Phillips Talbot was only 24 when he arrived in India in 1939. Within months of…

Some of the most inspiring books, plays, television shows and movies from around the world are invariably about the man who has vanquished seemingly insurmountable odds to gain wealth, fame and lifelong admiration in a single lifetime. The ‘American dream,’ in fact, is to climb out of the ghetto and become a superstar — a story we’ve heard countless times, even as far away as Pakistan. We don’t believe in it, of course, because the hero or heroine in these stories never speaks Urdu, or wears a shalwar kameez, and anyway, whoever heard of a Pakistani artist making it big through sheer hard work?

Perhaps the ‘dream’ is just a fairy tale, and perhaps not. Ali Kazim is certainly not a character in a novel or a TV soap opera. Ali Kazim is our very own success story. A home-grown boy from Pattoki, a small village in Punjab, Ali worked for a while as a billboard painter and a medical dispenser before he joined the National College of Arts (NCA) in 1998. He won a merit scholarship that allowed him to quit his job as a dispenser, and concentrate on his studies. He graduated with distinction in 2002, and a year later, he was invited to represent Pakistan at the George Keyt Foundation International Artists’ Camp in Sri Lanka, where his work was exhibited at the Lionel Wendt Art Gallery.

In 2005, he won yet another scholarship: a Royal Overseas League (ROSL) Arts residency that sent him to France for a year (the only Pakistani artist so far to have won this residency). On October 23, 2007, the V. M. Art Gallery, in collaboration with Green Cardamom (London), opened its doors for his fourth solo exhibition, with an average price tag of Rs.500,000 per painting.

The Golden Boy himself is unassuming, quiet, almost shy in his demeanour. His voice is uncharacteristically low for a Pakistani and you have to strain your ears to hear him. He’s not articulate, at least, not with words, but he has power in his art. His exhibition is casually titled ‘New Works by Ali Kazim’, as though he were already, at 28, a veteran artist with a prolific portfolio. Eighteen new works, to be precise, make up this exhibition — a progressive body of work that speaks of patience and dedication. 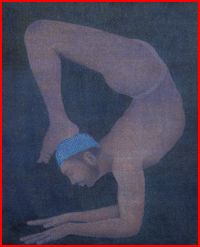 At first glance his work reveals a kaleidoscope of colour: he doesn’t work on very large paintings, but he lays down large blocks of primary hues, using red, blue, green and yellow in deep natural tones. The paintings have rigid divides of colour between the foreground and background, until you step closer. The manifest lists the medium as watercolour, but it isn’t until you stand right in front of a painting that you see the delicacy of tone, the multiple washes, the soft lines that you would normally associate with the medium.

When you stare long enough, you can feel the textured grain of the paper, and it’s a struggle to imagine how he maintains crisp outlines on such a grainy surface. Harder to imagine when you learn that each painting takes several months of patiently laying down a colour, washing away excess pigment, and re-laying pigment on top to create sparkling jewel tones and deep textures of skin and human flesh. His technique is derived from several sources, including (though Ali insists that this is not his primary source of inspiration), the painstaking art of miniature painting.

With the exception of the triptych Skin, all of Kazim’s paintings are portraits. When asked, he admits that almost all are based on actual models, though the style of the figure is inspired by the Priest King figurine of Moenjodaro. In Red Flower, a dark-skinned man stares intently at you, as though daring you to comment on the red flower tucked in behind his ear — an ostensibly effeminate gesture that Ali finds commonplace. The figure’s smooth, bald head is supported by a strong, bull-like neck and broad shoulders, and only a twist of the head reminds one that this isn’t, in fact, the Priest King in glorious technicolour. The figure’s masculinity cannot be questioned, which is perhaps the point Ali wants to get across.

In another painting, Untitled, brilliant red seems to blind the figure, as he cowers towards the bottom of the canvas, arms up to cover his face. In the series titled Circus, men stare at us from the crevices of bodies contorted in impossible shapes — reminders of circus acts from Ali’s childhood. From adolescence to middle-aged men, Ali explores the male body with increasing sensitivity. Young boys shy away from their audience, but are placed on a stark white background that is yet to be marked by experience. A middle-aged man seems to reflect on his past as his profile is blurred and merges into a shadow — rough bristles on his chin stand out in delicate green tones in Stranger. A man and a woman lie casually in repose, as miyan mithoo (a parrot) chats with them from his perch on their feet. With each of these paintings, the line of a man’s shoulder, the curve of a breast, the solid force of flesh and muscle are described in an instance, and only after do the details of lip and mouth, eyes and hair register.

The rare female among the figures (other than Girl with Miyan Mithoo) is a small girl and an owl, Trance I, a painting awash with shades of ultramarine. Unusually, this painting is reminiscent of children’s book illustrations, a marked departure from the tension that exists in his male figures. Even the composition lacks the bite of the others, as the owl huddles in a corner behind a girl looking away from us. There is a sense of disconnect with the adolescent female figure, and it shows. Similarly four new works in which Ali experiments with leather, Man on Animal Skin I — IV, lack the vibrancy expected of him.

Perhaps the unfamiliar material and a brand new technique hamper his vision, because the four men in these paintings, aged between adolescence and adulthood, are in profile, staring vacantly into the edge of the leather cut around their faces.

Overall, Ali Kazim’s paintings are oddly surreal — odd since the figures are quite realistic. In some tiny way, his work resembles Frida Kahlo’s self-portraits, but without the rampant imagery she built into her paintings. Ali’s paintings are simple, and they spur us on to look for some hidden secret, a glimpse of a distant truth, a carefully worded message, hidden so carefully, you could spend a lifetime searching for it. Whatever it is, Ali’s work has that intangible quality that has already made him one of Pakistan’s most sought-after contemporary artists, both here and around the world.

This is the ‘Pakistani dream.’