One would think that the number of women in the Pakistani workforce is growing as economic pressures mount and double income families become the norm. However, the actual figures are surprisingly low. As yet, only 15.76 percent of the women have been allowed to take part in the socio-economic uplift of the country even though women constitute more or less 50 percent of the total population.

Further, the women who are included in the workforce remain underpaid. According to the Pakistan Bureau of Statistics, the average monthly working wage for women in Pakistan is slightly over 8,000 rupees as against the minimum wage notified by the government which stands at 13,000 rupees per month.

In the developed world, women are playing a crucial role in socio-economic development. Countries like Finland, Denmark, Sweden, Canada, France, Russia, Ireland, Portugal, Ukraine, Latvia, Moldova and Estonia are among those where women stand shoulder to shoulder with men in terms of working wages. But In Pakistan, we still have a long way to go.

The  demographics (2013-14) available from the Pakistan Bureau of Statistics (PBS) also present an interesting picture of the distribution of the female workforce throughout the country. The majority of working women come from the Punjab which has a 12.92 percent share in total female workforce. This is followed  by Sindh with 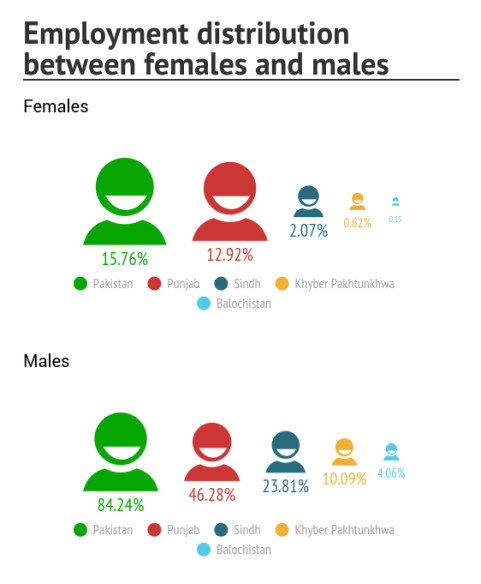 a share of 2.07.percent Working women in Balochistan and Khyber Pakhtunkhwa remain highly marginalized with 0.15 and 0.62 percent shares respectively.

“Even though women are visible in the workspace in Pakistan, there is resentment against them in public spaces. Men, in fact, are the biggest barriers for women in the public sphere,”  says Zoya Rehman, a gender activist from Bytes for All. She further emphasizes the need for the female workforce to grow because  when an increasing number of Pakistani women make an impact and speak from a position of power, the more their voices will be valued.

Interestingly, while the Punjab may have the largest female workforce as compared to all the  other provinces, it pays the lowest average monthly wages to working women, which equals to 7,105 rupees. Of the 12.92 percent, around 8.18 percent are drawing up to 5,000 rupees a month on average.  Only 1.31 percent are  drawing more than 15,000 rupees a month.

Women’s participation in the country’s socio-economic uplift from Balochistan and Khyber-Pakhtunkhwa is below one percent collectively in terms of their employment share. Most of these women fall in the slab of those drawing more than 15,000 rupees a month. The pattern determines that in these two provinces, it is only the relatively more educated and affluent women who manage to come out of their homes to work

Similar to patterns in the Punjab, the maximum number of working women in Sindh also belong to the lower and middle classes who are drawing between 5,000 and 10,000 rupees a month on average. 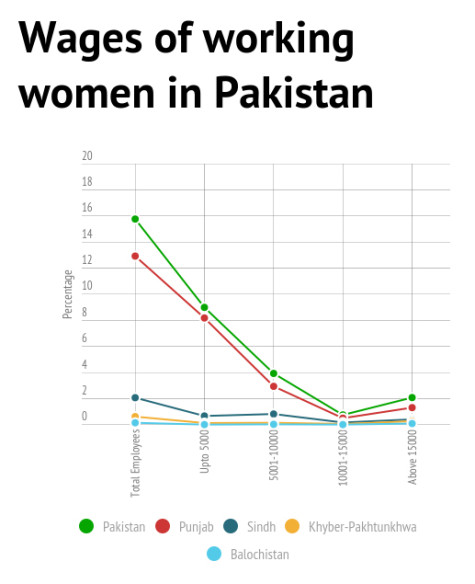 It is interesting that in comparison to urban areas, women from the rural areas of Pakistan are more active outside the home. The main reason seems to be that they are more needy but some experts argue that the rural communities are actually less conservative than urban areas. However, this argument becomes invalid considering the number of human rights violations and repressive acts against women seen in these communities, such as honor killing,wani, swara, etc.

In rural areas, 18.35 percent women work outside their homes to earn bread for families. However, their average monthly income is less than 6,000 rupees. In comparison, in urban areas, 12.60 percent women get the opportunity to work but they draw up to 12,500 rupees a month on average.

“Pakistanis need to realize that if more women work, the economy will grow and families will become more financially sustainable and prosperous,” says Zoya.  We must get rid of false notions about religion forbidding women to work outside the home. She argues that Islam grants women more rights than Muslims realize.  And women must exercise these rights publicly and unapologetically.

Lorem Ipsum is simply dummy text of the printing and typesetting industry. Lorem Ipsum has been the industry's standard dummy text ever since the 1500s, when an unknown printer took a galley of type and scrambled it to make a type specimen book.