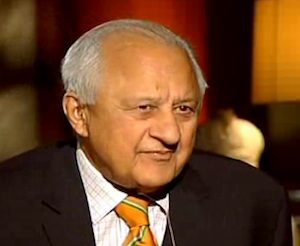 There’s an interesting (and disturbing) video interview posted on IBNLive (and shared via twitter by writer @PatrickFrench2 and journalist @OmarWaraich) in which the host of the talk show “Devil’s Advocate,” Karan Thapar, talks to Pakistan’s former foreign secretary Shahryar Khan about militancy in Pakistan. They discuss the infiltration of the ISI and military by jihadis and terrorist sympathisers, as well as the safety of Pakistan’s nuclear arsenal. The former diplomat admits to the unease in Pakistan and the “soul searching” going on about the failures of the military and government and the very real problem of ties between members of the armed forces and militants. But while he hints at the concern over rogue elements within the military, he defends Pakistan’s military leadership, saying, “I believe that no ISI head would actually want to do something as drastic as Mumbai [26/11]. It would be so counter productive and it has proven to be counter productive. I don’t think they would be engaged.”

Of course, few people in Pakistan trust the ISI and the military, especially after the Osama raid and the attack on PNS Mehran, and so his words won’t make much impact. And as the conversation between Thapar and Khan goes on, it is clear that ISI-jihadi links are only part of the problem, and perhaps so is Mr Khan.

Eventually, the tough questions by Thapar force an acknowledgement by Khan about the dreary current state of Pakistan:

“I think there is no doubt that we have plunged the depths of governance, if you like. I think the problem here is that over the time we had civilian democratic government, we haven’t gotten out of the idea, the sort of background, of the civilian government not being able to deliver. And as a result you have this precipice syndrome that Ahmed Rashid has referred to…” Sadly though, when talking about the “precipice,” the former foreign secretary doesn’t refer to religious extremism at all.

Overall, he seems to downplay the very enormous danger of extremists and the extremist mindset. He says that the country’s nuclear assets are safe (“The military and others are absolutely, totally focused that we would not allow anything to happen there”) and that the country’s leadership will ensure that the jihadi-minded among the enlisted ranks “will no longer be allowed to have effective control” over sensitive military operations and assets. But can they be purged altogether?

He wants IBNLive’s Indian viewers to believe so. He promotes the idea that the vast majority of the population and youth of Pakistan are against violent jihadi organisations such as Lashkar-e-Taiba and wish to defeat terrorism.

But then he says something that shows Pakistan is in a much bigger existential dilemma than he had admitted. While talking about the infiltration of security forces by violent extremists, he makes an awful statement about the murder of the Punjab governor in January 2011:

“You have to distinguish the killing, assassination of one man like Salmaan Taseer, who stuck his neck out in the cause of blasphemy and various other religious causes, who was in a way, I’m sorry to have to say this, asking for it from the extremists. We have extremists.”

The horrible statement announces three things about Pakistan to the world that speak louder than anything else he utters in the rest of the interview:

Nothing else he says in the interview matters: it doesn’t matter that he believes that university students want to ban militant groups and the public wants peace with India. What matters is that the militants and their intolerant, warped version of Islam de facto rule the country and are untouchable. If the government and its leaders can’t and won’t fight the violence, lawlessness and intolerance that has metastasised within Pakistan and targets its own people, how can it truly find a cure for those same elements when directed outwards? Where will the political leadership and establishment find the will to do that?

And how can Mr Shahryar Khan say that there is “soul-searching” going on when he admits the nation can’t have open dialogue about some of the biggest issues tearing the country apart?

Click play to watch the video from IBNLive below: