Trying to Ban the Bible: Hypocrisy and Insularity 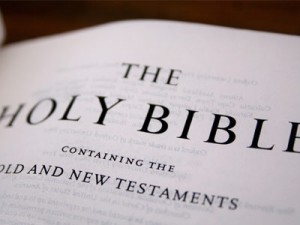 It has been observed that religious parties often make issues out of non-issues in pursuit of petty aims. Sadly, their approach and rigid stance only invites more disharmony and violence in society. In their statement, the JUI-S did not specify whether they wanted a ban on the selected passages or the entire Bible. In any event, their demand to ban the Bible was not only against the inherent right of one’s freedom of choice but also goes against the fundamental right to religion enumerated in the Constitution of Pakistan. Article 20 of the Constitution (see below) clearly guarantees every citizen the freedom to practice and profess his or her religion. Moreover, it also preserves the right to maintain religious institutions according to one’s faith.

Unfortunately, there is no dearth of social and religious myopia in our society. Emotions run high when it comes to religion and people fail to understand the implications of measures that may seem justified but can actually bounce back and be damaging. In most parts of the world, including Christian-majority countries, Muslims have justly been given liberty to preach their faith. Religious organisations are free to invite non-Muslims to Islam or revive the faith of born Muslims. They are also free to disseminate religious literature. If in foreign countries Muslims have the freedom to practice their religion openly, then why aren’t the clerics of the JUI-S ready to give Christians in Pakistan the liberty to read their holy scripture? Similarly, one must ask them how they would react if the courts in “western” countries move to ban the Quran. It won’t be logical to play the “Muslims are always a victim” card.

In general, non-Muslims in the West are more open to reading the Quran compared to Muslims reading the Old Testament or the New Testament. There are various reasons that draw people to a study of the Quran. For instance, it may either be due to curiosity, or for a comparative and scholarly objective. Recently, former British Prime Minister Tony Blair said in an interview that he reads the Bible and Quran daily to be “faith literate” in today’s world. He also added that he wanted to understand some of the things happening in the world. “Jihad,” or holy war, is one concept that has been both quoted and misquoted from the Quran. With Blair, it seems he too was curious and wanted to discover firsthand what the Quran’s actual teachings regarding jihad were.

The third US president and one of the founding fathers, Thomas Jefferson, was also said to have studied the Quran. Some scholars believe he kept a copy of the Islamic holy book due to his interest in the study of natural law. He would often invoke the teachings of the Quran to criticise William Blackstone’s Commentaries on the Law of England. Others claim that Jefferson studied the Quran in order to understand the religion of an enemy and to deal with Barbary pirates who would attack American merchants and sailors off the Barbary Coast.

In 1786, while negotiating a treaty on behalf of the US government with the envoy of Tripoli, Abdrahman, Thomas Jefferson received a shocking reply. The ambassador claimed that the Quran sanctioned to enslave or kill all those “who should not have acknowledged their authority.” Despite that bitter reply, Jefferson didn’t try to ban the Quran but instead delved deeper into its study and identified the danger of neither reading the Quran in context nor without consulting supplementary texts.

It makes an interesting thesis as to what factors drove non-Muslim politicians to study Islam in different times. In today’s time, one lesson religious parties in Pakistan can learn is that to engage in an effective and scholarly argument is possible only if their leaders and members indulge in a comparative study of religions instead of mobilising in the hope of banning the Bible.

Article 20 — Freedom to Profess Religion and To Manage Religious Institutions

(a) every citizen shall have the right to profess, practice and propagate his religion; and

(b) every religious denomination and every sect thereof shall have the right to establish, maintain and manage its religious institutions.