The Day the Earth Shook

The relationship between  a doctor and patient is interesting. It is more than just business. It is symbiotic. It is an emotional connection and a dialogue. It is, in fact, very difficult to explain. Money cannot buy it. Nor can one be forced into it.

I had arrived in the KPK region within five days of the 2005 earthquake. I had been unable to sit back and watch things happen from a distance. Something more concrete had to be done. Something more than just fund raising. Boots needed to be on the ground. When I arrived in Abbotabad, I was supposed to hook up with SIUT’s team of kidney doctors and the dialysis unit but a big aftershock had rendered the medical college building very unsafe. They were taking their units and patients elsewhere. So, I looked around and made my way into a big tent and announced my intention to start helping. In 15 seconds, I was in action. By evening that day, we had moved all our patients into a local hospital with proper operating room facilities.

I was in the Operating Room assisting the surgeon on a kid with a broken leg. Screws were not all the way in yet when the walls began to move and the overhead light shook. There was this  almost inaudible rumble, a sort of background grumble that one only feels rather than hears. Something like a very big dog standing behind your neck waiting for you to turn. Those few moments in which  we did not know if the hospital would collapse over our heads or not seemed like an eternity. We held our breath, the shaking stopped and then we went back to work. No one talked about it. Not the OR team, not the patients, not the families. We all just went about doing our jobs. We were volunteers. None of us abandoned our posts. This happened multiple times during my stay in Abbotabad. The anticipation of impending disaster is what gets you. The aftershocks are worse than the real jolts. 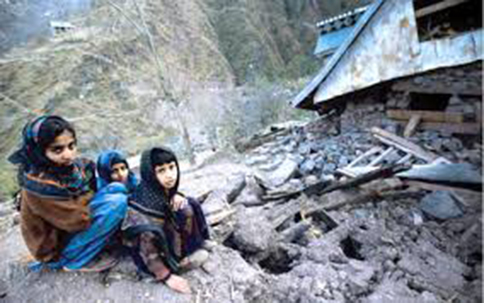 But the most persistent memory is the smell. It never leaves you. I can still smell the iodine from the hospital that day when the ground shakes if a big truck goes by. Then the smell of dead flesh that was in the air is still fresh in my mind. Flashbacks are occasional. I get palpitations thinking about it. I realize that I may have some degree of PTSD (post Traumatic Stress disorder).

We were not suicidal. Neither were we exceptionally brave. So why did we stay?

The author is a US-based doctor, social activist and aspiring painter and photographer.